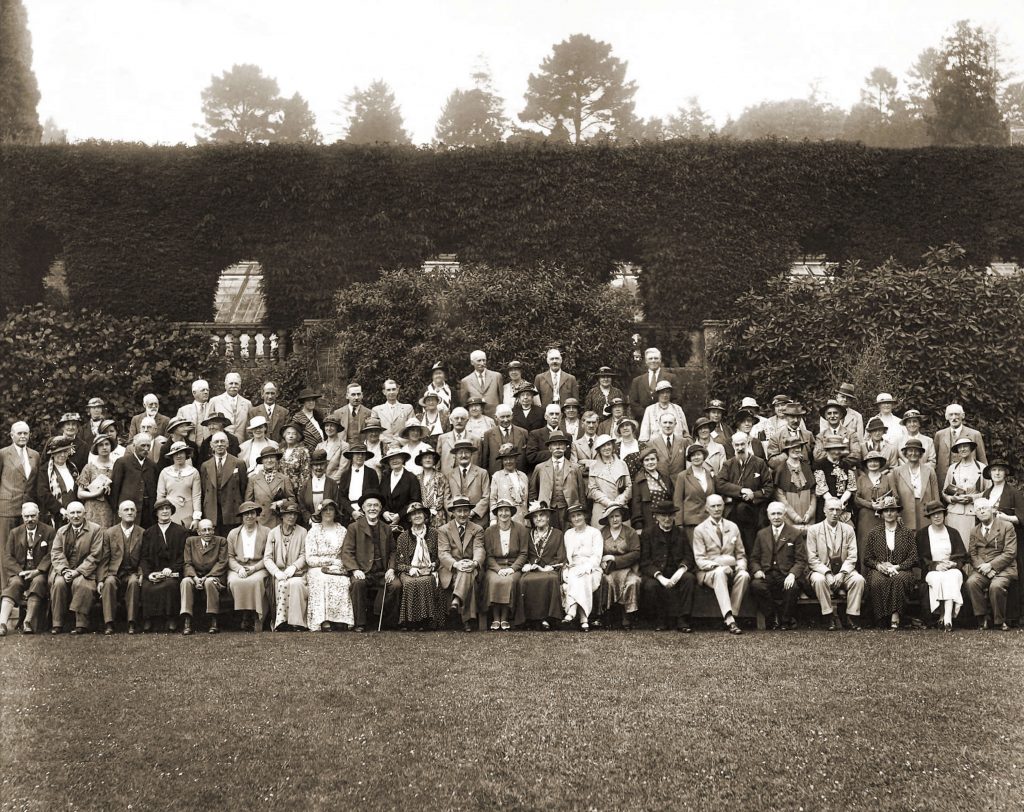 This group photo, part of our growing photographic archive curated by Dr Helen Wilson, was probably taken at of one of our Annual Meetings, maybe in the 1920s. Unlike many of the photographs in the collection, the original bears no identifying information.

You can click on the photo to see a much larger version. So far the only person we have been able to positively identify is Richard Hansford Worth (1868–1950) who is seventh from the right on the second row. There have been suggestions that the seated gentleman on the far left may be Robert Burnard (died April 1920 – a bit early, we think), and that the man with the white beard on the left of the back row may be Richard Pearse Chope (1862–1938) – this is based on a photo published in our 2012 Transactions (page 34). We would expect the President would be sitting in the centre front, so is that Lady Radford, making this Lynton in 1928? (no – see below!)

As reported on p. 16 of the Autumn 2019 issue of DA News, the mystery has been solved. The photo has been identified as having been taken at Sidbury Manor during our 1935 conference that was held in Sidmouth. The balustrade and the tall arched yew hedge in the background are what gave it away – they both survive today and were identified from other photographs on the internet. We suspect that the figures in the front centre are Sir Edward and Lady Cave.

The report of the conference in our 1935 volume of Transactions includes the following:

“… the party proceeded to Sidbury Manor … The grounds and gardens abounding in rare and interesting plants and shrubs, their beautifully kept lawns and high yew hedges, then claimed attention. A group photograph having been taken …”

Thanks to all who contributed to solving the puzzle: the photo has now been given its rightful place in the DA’s photographic archive.

Although this mystery has been solved, any clues to the identity of other people in the photo would still be most welcome. Please email us at mysteryphoto@devonassoc.org.uk or use the “Leave a reply” box below. (Note that your comment won’t appear immediately, and the email address that you enter won’t appear at all).