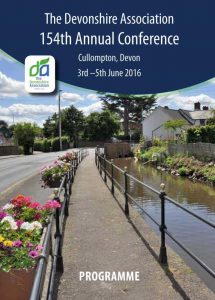 The Association’s 154th Annual Conference and AGM was held over three days commencing Friday 3 June 2016 at the Padbrook Park Hotel, Cullompton. This modern building, part of a golf and country club complex, provided an excellent conference room with catering and bar facilities adjacent. The Conference room walls were enlivened with a display of art by the artists of the Devonshire Association.

The conference commenced in the customary manner after lunch on Friday with presentations by a number of the Association’s Sections on the Distinctiveness of Cullompton in relation to their specialist subject area (see below). Prior to the President’s reception in late afternoon, Stuart Blaylock led a group on a visit to St Andrew’s Church and the surrounding area.

The evening’s public lecture Water Power in the Lower Culm Valley was given by Martin Watts. Martin was curator of a working mill museum in South Yorkshire for three years, before moving to Devon in the early 1980’s, where he carried out practical repairs on a watermill and set up a stone-ground flour business. He subsequently worked as a freelance millwright and traditional milling specialist, carrying out research and advising on many aspects concerned with the history, recording, interpretation and conservation of watermills and windmills. He delivered an authoritative address on his chosen subject in which technical issues were clearly explained and emphasised the historic importance of wool and the woollen mills in the economy of Cullompton. A paper based on his presentation has been published in the 2016 volume of Transactions.

Saturday’s proceedings commenced with presentations from a number of authors whose papers were due to appear in the 2016 edition of Transactions. As usual the subjects were wide ranging and topics included: Highlights of a building stone survey of Devon, Pixy-Led in Devon and the South-West, and Bronze Age Geometry: the Layout of the Ceremonial Site at Merrivale. Along with his customary adroit chairing of the session, Malcolm Hart presented his own paper Devon’s Landscape and Seascape: One of Britain’s Most ‘Designated’ Counties. 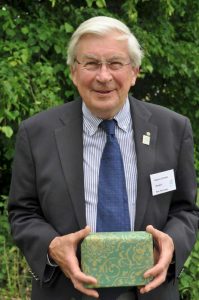 The retiring Honorary Secretary, Bob Letcher with his farewell gift

The Association’s AGM took place in the afternoon with Chairman Peter Beacham identifying some of the important issues affecting the DA and, in particular, the Review of the Association which is currently under way. Peter also took time to give warm thanks to outgoing DA Secretary Bob Letcher, recognising his many years of dedicated service, The new Secretary, Nick Wells, was formally elected along with a new Executive member, Helen Wilson, who is also current Chair of the Buildings Section.

Following tea, outgoing President Tom Greeves conducted the installation of the new President, Dr Todd Gray who then proceeded with his Presidential address. The title of Todd’s paper was Appropriate History. His theme was that not only is the study of history changing, but those studying it are also changing along with the topics studied. As society changes so too does the history that it is interested in – history is always about today and very seldom is it exclusively about the past. 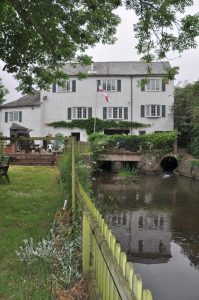 On Sunday delegates had the opportunity to participate in a number of visits:

The Cullompton Mill Leat walk was led by Martin Watts. The unusual configuration of three double mills is on the town side of Tesco’s supermarket, each mill pair being just a few hundred metres apart. Higher Mills is now a refurbished house, Middle Mills is almost non-existent. Lower Mill however is a private dwelling in which some of the original workings are still present. According to the booklet – The Cloth Trade in Cullompton and the Culm Valley – William Upcott originally owned Upper and Middle Mills, and in 1831 used Middle Mills for woollen manufacture. The historical and technical developments of the mills were brought to life using copies of old maps, drawings, and water colour depictions. 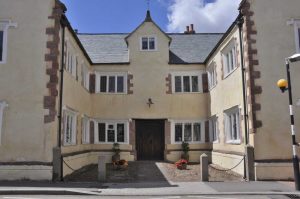 Walronds is a late Tudor Grade-I-listed town house which was built between 1602 and 1605 to replace a house destroyed by fire. Restoration of Walronds was carried out by the Cullompton Walronds Preservation Trust (CWPT) and the fully restored house was officially opened by HRH The Duke of Gloucester in June 2014. This self-guided tour was introduced by Mrs Jane Campbell who served on the Mid Devon council for 20 years and was the founding Chair of the trust – a position that she still holds today. Owned by the CWPT, Walronds is now used for community purposes and for holiday letting.

Walk along the River Culm

The ramble on Sunday afternoon across parts of the Killerton Estate was enjoyed by some twenty members of the Association, admirably led by the Conference Local Advisor, Mrs Lee Martin. It reminded us only too well of W G Hoskins’ assertion that most of England is a thousand years old, and that in a walk of only a few miles one could touch nearly every century in that long stretch of time.

From Ellerhayes Bridge on the River Culm, adjoining the apparently disused Silverton paper mill, we skirted the extinct volcano called Dolbury Hill, on the summit of which is a prehistoric enclosure, and surveyed the ancient wood pastures of Killerton Park rich in wildlife interspersed with veteran trees. Notwithstanding the mainline railway, the views across the water meadows of the Culm Valley towards Silverton, one of the oldest Anglo-Saxon villages in Devon, and the backcloth of Cadbury and the Raddon Hills were testament to the antiquity, beauty and fertility of the landscape before us.

The group paused at Columbjohn where the Aclands lived before moving to Killerton in the mid-18th century. The burial ground surrounding the re-built chapel demonstrated the botanical importance of graveyards, in this case the neutral grassland supporting species such as Germander Speedwell, Oxeye Daisy, Corky-fruited Water Dropwort and Pignut which, whilst once common, are far less so in intensively farmed landscapes today.

At Columbjohn Farm, Mrs Martin introduced us to Mr Patrick Greed, the National Trust’s tenant and a renowned breeder of Limousin cattle, some of which we were privileged to see on our walk. He told us about the challenges facing farmers in the current economic climate, not least the difficulties experienced by livestock producers in coping with outbreaks of TB. He had recently had first-hand experience of this despite an innovative programme of vaccination of badgers implemented by the National Trust on the Killerton Estate which has now been discontinued. 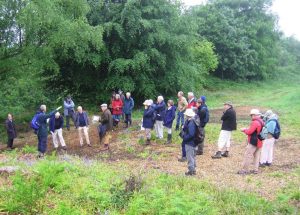 Leader Bill Horner with participants at the Hembury Hillfort

It was a dull but dry day when 22 members collected at Hembury Hillfort above Payhembury for a visit under the guidance of Bill Horner, the County Archaeologist.

Participants walked across the main site of this early and middle Iron Age settlement. It appears to have been abandoned at that time and later reoccupied by the Romans from 40 AD, perhaps in connection with the extraction of iron ore from these hills. The site was extensively excavated by the late Professor Malcolm Todd in 1980-83 and his findings were published (1984 Excavations at Hembury (Devon), 1980–83: a summary report. Antiquaries Journal 64: 251768).

The group then moved below the escarpment of the hill fort to walk along the tracks where the greensand covering the hill has been extensively mined by short adits. These were driven into the hillside to extract silicious sandstone nodules from a 7 metre thick band along this edge of the Blackdown Hills from Hembury to Blackborough. The nodules came out almond shaped and were used as whetstones for scythes and sharpening knives from 17th century, growing to a national trade in the 19th century (see DA Transactions 1993). They were superseded by carborundum stones (synthetic) from about 1920 which were manufactured using arc furnaces. Examples of the genuine whetstones are in Exeter Royal Albert Museum. 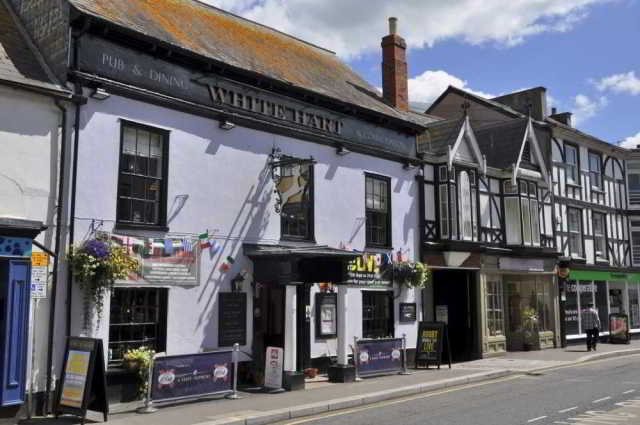 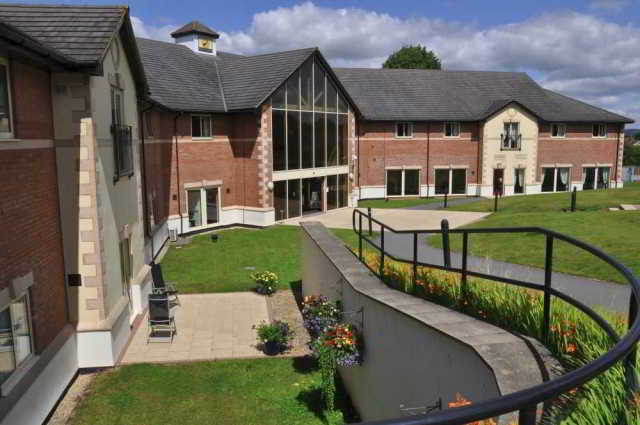 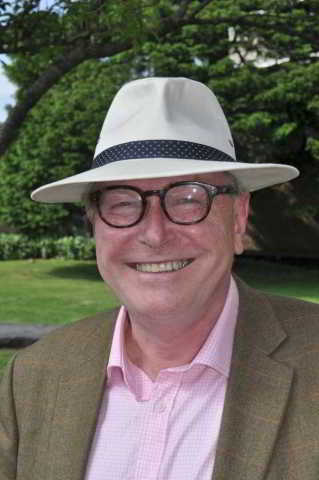 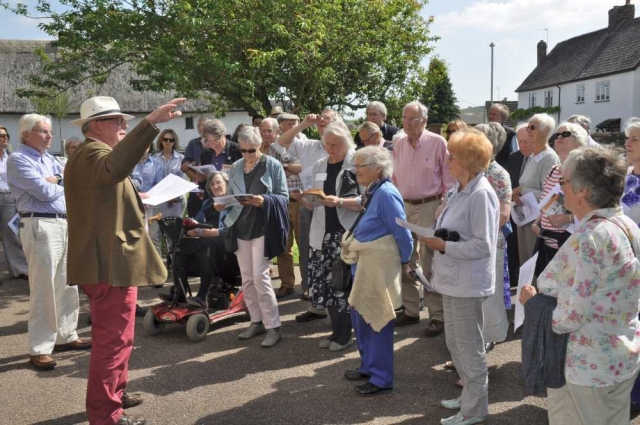 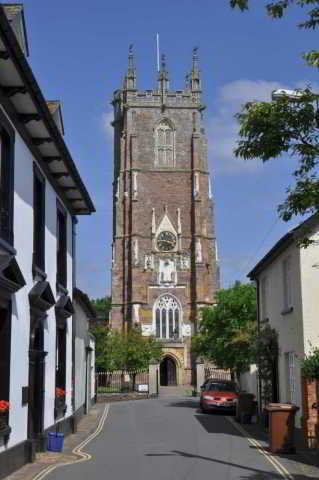 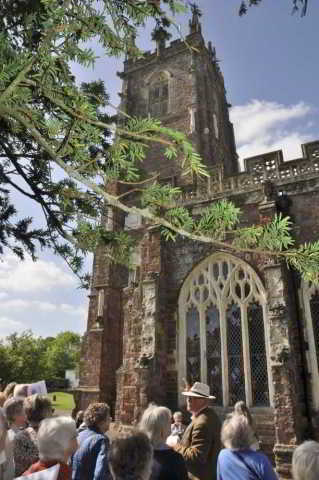 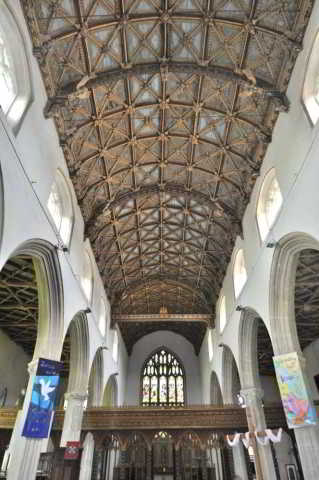 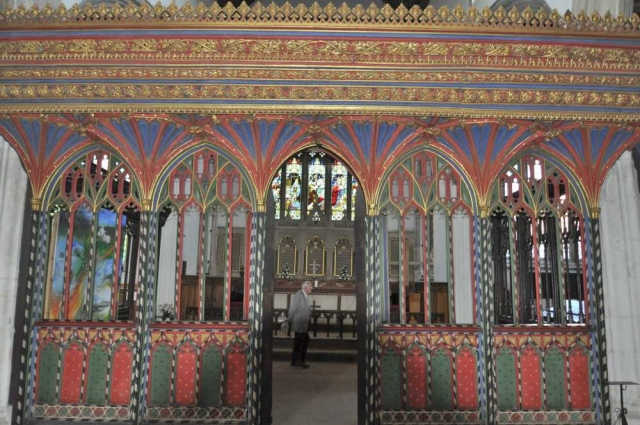 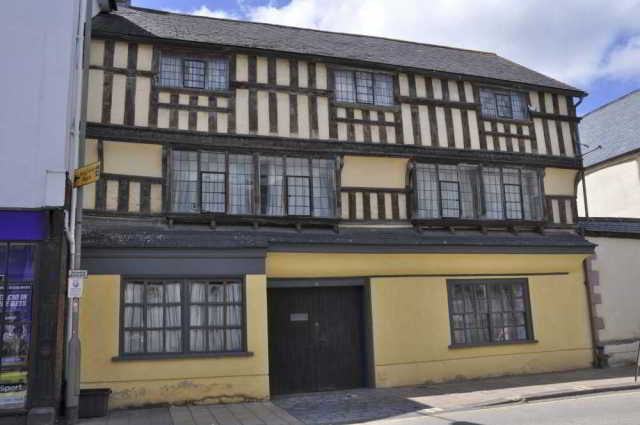 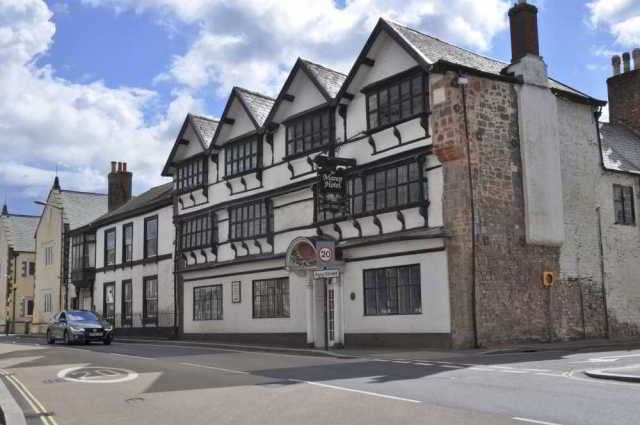 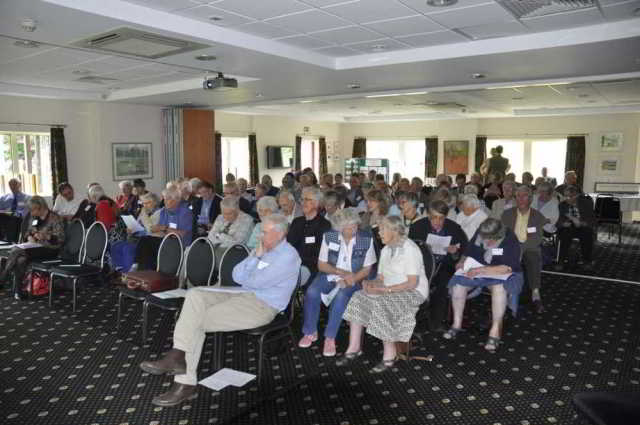 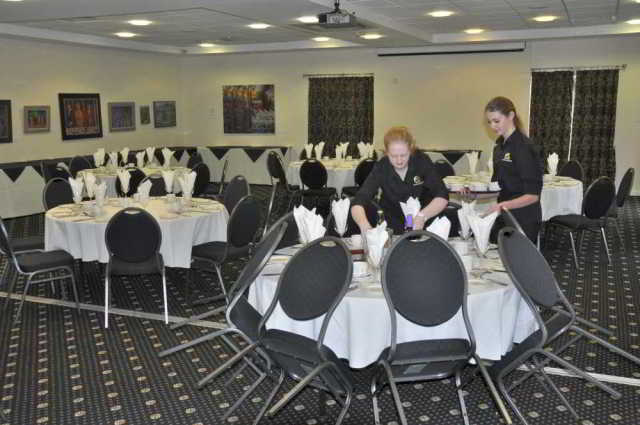 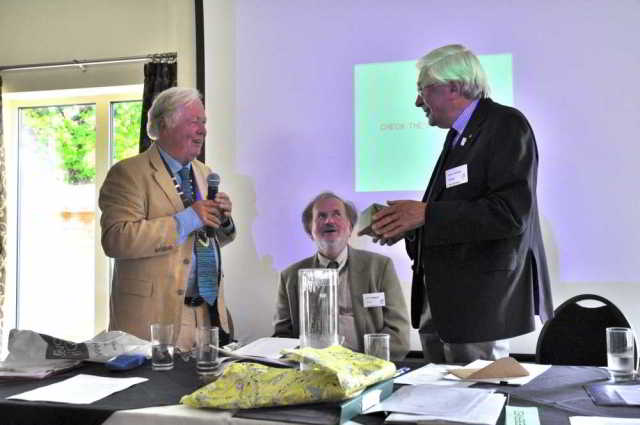 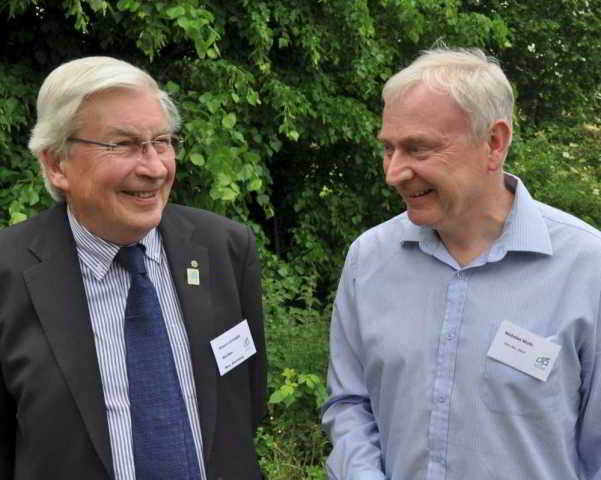 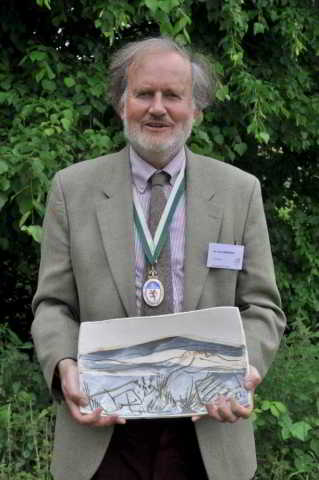 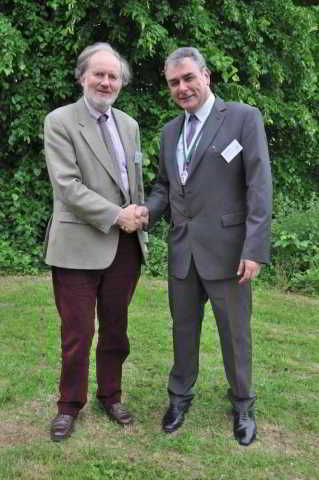 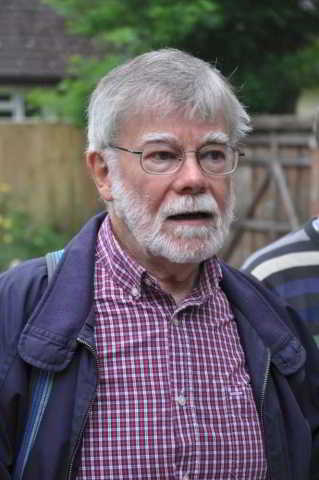 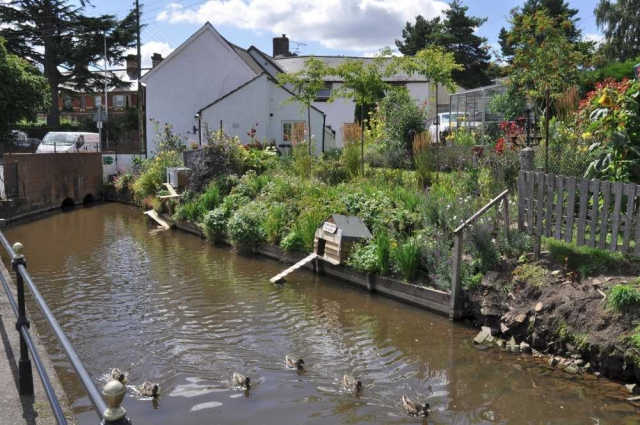 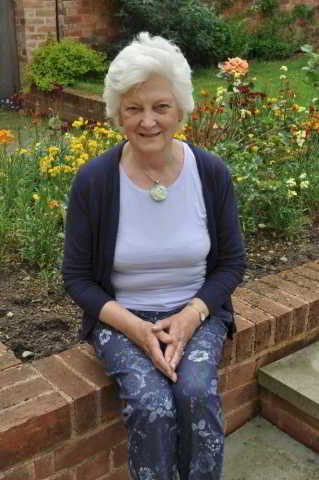