WHEN I gave my first report at South Molton two years ago I said I hoped to produce a series of dialect maps; I am very pleased to be able to present the first of these in this, the centenary, year of the Association. I have really enjoyed compiling this map and I am especially grateful to members and their friends who have written to me from all over the county helping me in my inquiries.

The map introduces a new type of dialect study and prepares the way for the most interesting and absorbing work yet to be undertaken in this field. During the next few years I hope members will help me to produce several other maps, so that in time it will be possible to deduce accurately the variety, both in terminology and in pronunciation, within the dialect. In future the emphasis in these reports will be on the analysis of the dialect. For this the material which has been collected since the reports began in 1877 will be indispensable and I shall always be pleased to add to it.

I have divided this report into two sections: the first contains words and phrases recorded in the usual way; the second comprises the map and a detailed description of my findings from it. In the report I have used the following abbreviations:

Where necessary pronunciation has been given in phonetic script (see 64th report).

Each contribution ends with the initials of the observer. All remarks which follow are the Recorder’s. References to past reports are given thus: (2) x.117 = 2nd Report, vol. x, page 117.

Aerated = excitable. ‘ “Rector be a bit aerated this morning.” Said about the rector, who was a bit excitable!’ —S.H.B. This must be a corruption and misuse of irate.

Bivvery = shivering with the cold.—M.H. Mrs. Harding says this word was used in her youth in North Tawton. Mr. Fulford Williams notes that the term Biverly Town occurs in Baring-Gould’s Songs of the West. The word is derived from OE bifian, to tremble (Dutch bibberan, to tremble). See Biver, (12) xxiii. 128, (18) xxxii. 58; Bivering, (8) xvii. 88.

Bickety-rug = naughty or difficult child. ‘When I was naughty as a child I was frequently told by my nurse that I was a “bickety rug”.’ —E.M.G. I think this may well have arisen from two OE words, be-ceorian, to complain of, and ruh, rug, wild, uncultivated, giving rise to the significant phrase bickety-rug, something unrestrained and to be complained about. N.B. also ME bikeren, to bicker or fight.

Bunhay = sluice gate. ‘The word comes from the diary of John Still of Seaton, 1838, and is still used by the older workmen of the area.’—E.M.G.

Crinty, Crinting = grizzly, crying. ‘Commonly used of a grizzly child.’—D.B.R.O. This word comes from the now obsolete usage of grunt, meaning to groan. Chaucer has:

‘But never gronte he at no strook but oon,
Or eles at two, but if his storie lye.’

‘Who would these fardels bear,
To grunt and sweat under a weary life.’

Estermain = serge cloth of clergyman’s grey. ‘A Mr. Yeoman, a native of Liverpool, whose parents were born and bred in Kingsbridge, remembers that when he was a small boy his mother had suits made for him of a serge which she called “eastermain”, which was a sort of clergyman’s grey. The tailor had never heard the stuff called by that name which old Mrs. Yeoman had imported from Devon.’—H.R.E.

Lentshirt Night. ‘This is the first Monday in Lent, a night when the boys of the village play practical jokes on others. This was told to me by a native of Georgeham.’— S.H.B.

Nizzle-tripe = small undernourished child or animal, used especially of pigs. ‘ “Oh! What a nizzle-tripe!” Often said of me when I was small.’—E.B. I recorded nizzle-draft and nizzle-drish last year. Nizzle-tripe or nuzzle-tripe ((18) xxxii. 64) is the usual East Devon variant.

Old Christmas Day. ‘This is still used even by young people for the Epiphany.’—-J.S.

Rise = a birchy broom. ‘The late Miss Lega Weekes told me that she had met a lady whose father always called a broom made of twigs a “rise”. It was the rebus of the family of John Ryse, canon of Exeter Cathedral, and treasurer from 1518 to his death in 1551. A representation of a rise was carved on a fine fireplace which John Rise gave to the hall of the Vicars Choral, together with arms of the office of treasurer. It can also be seen on the screen of the Speke Chantry in Exeter Cathedral; in a canopied niche containing an angel holding a shield bearing the arms of the treasurer. The niche has two rises: a fat one and a thin one. There is very good reason to believe that the Vicar’s Hall fireplace also bore two rises originally. On a screen which I discovered at Marshall Farm, Ide, there were two niches each containing a rise: a fat one and a thin one. This showed that the farm (the house has now gone) had once been the home of the Ryse family.’—A.W.E. OE (h)ris, a branch. Risewood = brushwood.

Shram, used to express the feeling one has when afflicted with a heavy cold.—E.M.G. Wright gives ‘Shrammed, benumbed with cold, West’, and Jago in his Cornish Glossary has shrimmed, The OE word scrimman refers to limbs drawn up or permanently bent.

Stroll. This word has already been recorded, but Mr. Sherwill Thomas gives further information about its meaning. He writes: ‘A Widecombe friend of mine, of old Dartmoor stock, has never heard the word, which occurs quite frequently in Crossing’s Guide to Dartmoor (1909), according to which it means a gradually narrowing tongue of common leading to a trackway between the walls of an enclosure for use in driving beasts down to the farm from the common.’ See Stroles, (32) li. 74.

Titter = a pimple on the tongue caused by telling lies.— M.H. I think this must be connected with the idiomatic expression tittle-tattle, which usually refers to idle gossip. The word is derived from OE tihtla and ME titeren, to prattle.

Wae = a woe or condemnation of bad cloth, apparently 17th or 18th century. Taken from a report made in 1927 for the ‘Incorporation of Fullers etc. of Exeter’.—H.F.W.

Wangi = limp and lifeless [wæŋi]. ‘This is frequently heard in such expressions as “ ’Er’s praper wangi”.’—D.B.R.O The OE word wanian meant to diminish or wane; this dialect word is obviously derived from this and is connected with the modern English wan.

1. ‘Our local doctor once told me how a man of 83 came into his surgery. The man had always been healthy but had cut his hand climbing an apple tree. When the doctor asked him how he accounted for his good health he replied:

2. ‘ “Living on borrowed time.” Frequently used in the Seaton area to describe a person over 70.’—E.M.G.

4. ‘Mazed as a sheep.’—D.B.R.O. This is an interesting simile and comes from the behaviour of sheep afflicted by the tapeworm Coenurus cerebralis, which affects their central nervous system, causing them to hang their heads, walk round in circles and throw fits.

5. This folk-rhyme comes from Mrs. Harding:

‘Eleven o’clock
The days be lock,
The cuckoo and the sparrer.
The little dog ’ath a burned his tail And shall be hanged tormorra.’

On this, the first map to be attempted by the Association’s recorders, I have charted the various terms used for the plain bun on which Devonshire cream is eaten. 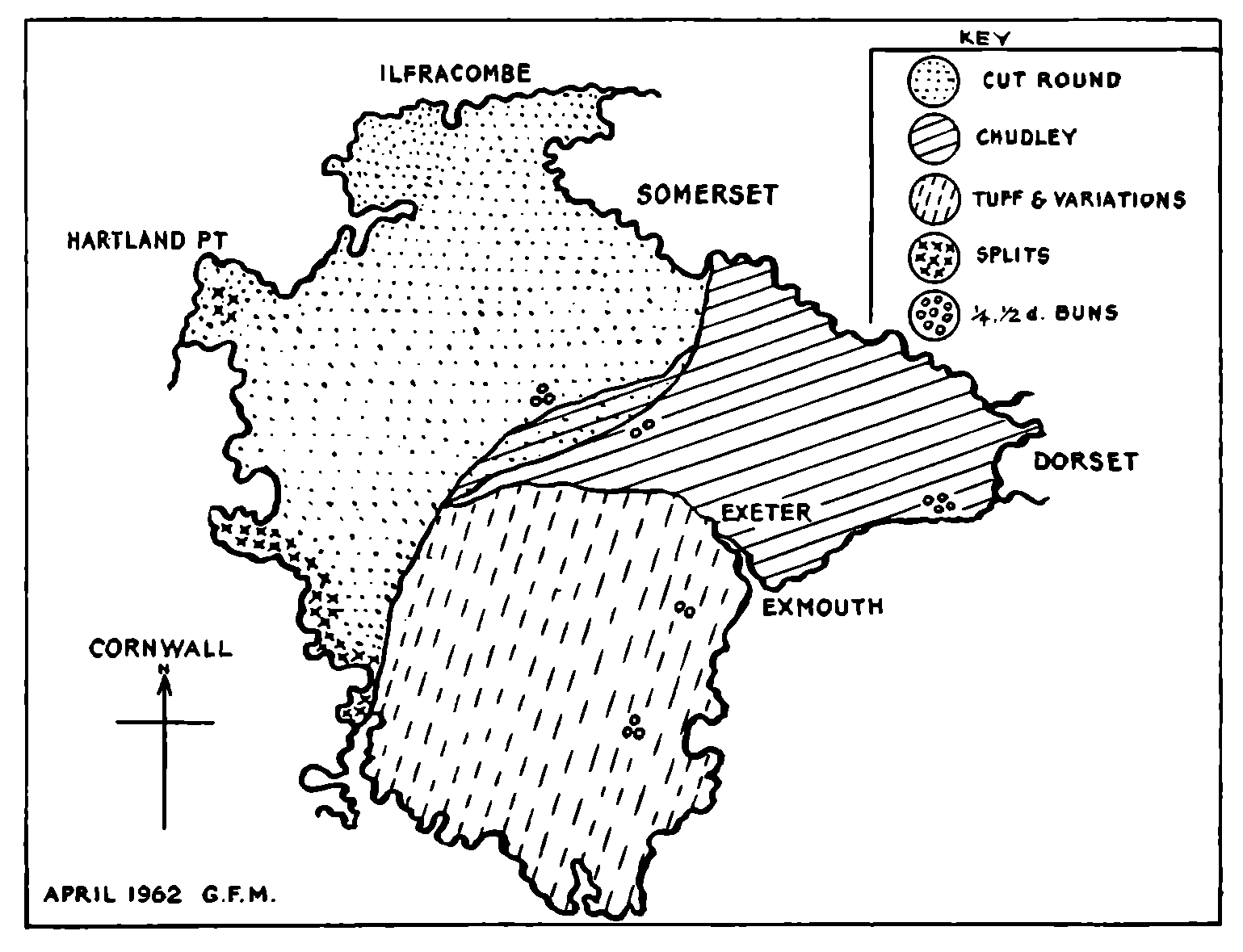 Altogether I have cited 84 towns and parishes – from Plymouth in the south to Lynton in the north, from Lifton in the west to Hemyock in the east. From these places 12 different names have emerged. Quite often I found that more than one term was used in a particular town; sometimes this resulted from a baker’s having moved from another part of Devon, sometimes because my informant turned out to be the daughter or granddaughter of someone who was not a native of the place. In these cases I could usually decide what the correct term for that place should be; however, if the evidence was not so obvious I have indicated on the map all the names used. Many older members of the Association wrote to me saying they could remember the term ‘farthing bun’ used; I have shown this, together with the term used today where it is known.

As I expected, the map shows three distinct areas, all marked by geographical features. The North Devon area is bounded by Dartmoor to the south and the River Exe to the east. In this area the term cut-round prevails. There is the solitary example of split at Hartland, and rather surprisingly I found chudley at Hatherleigh. East of the Exe the term chudley is almost invariably used; it was in this area that I found most examples of farthing bun, and the unexpected soft cake (in the Aylesbeare district). West of the Exe, over Dartmoor and extending to the south coast tuff, and variations of it, was in general use. I also found ashburton here, definitely used for tuff, butter biscuit, skit and nubbie. This last came from Lydford, from which I received altogether five different terms. There were three isolated examples of split in this area – at Lydford, Lifton and Newton Abbot – although I was told it was used extensively along the Tamar valley.

Not only does the name used vary between North and South Devon: the manner in which the buns and cream are eaten is also different. In South Devon the correct way to serve a chudley is to butter it, then use jam with a thick layer of cream on top. In North Devon the jam is placed on top of the cream. In Lynton, Lynmouth and Combe Martin the cut-round then becomes known as a bobby-dazzler. This may be an example of semantic change: see Bobby-dazzler, (65) xciii. 123.

I have appended a list of the towns and parishes used in this survey showing the term or terms used in each. I have also given a list of all the names used and the number of times each one appears. As not every town and parish in Devon has been charted, these numbers can be of relative interest only.

*From Frogwell, 3 miles WNW. of the town; cut-round is not used in the town.

Frequency of Occurrence of Names