Barnstaple. Report from the Entomology Section

The Barnstaple region has plenty of interesting insect habitats, including the rivers Bray, Heddon and Mole, home to some nationally scarce river flies, and parklands with ancient trees at Tawstock Park, in Castle Hill Park, and around Upcott, where the scarce fungus weevil Platyrhinus resinosus is found.

By far the most important area is the superb dune system of Braunton Burrows, where the rich plant cover of the dunes, slacks and grassland provides the foundation for a huge insect community. Giving some idea of the diversity, Barry Henwood has sent me a list of 770 recorded species in the immediate vicinity of the dunes of the ‘macromoths’ which he records for the DA and this does not include the butterflies (33 recorded species) or the many ‘micromoth’ species, which have different Recorders. Many of these moths are nationally widespread, but some are specific coastal or dune species with local food plants: Agrotis ripae, the Sand Dart, which feeds on Sea Rocket on the strand line, Anerastia lotella whose larvae feed in tubes on Marram grass, Hadena luteago barrettii, Barrett’s Marbled Coronet, with larvae in the roots of Sea Campion and Rock Samphire, and Perizoma albulata on Yellow Rattle. In high summer, the most conspicuous moths are probably the day-flying Five-spot and Six-spot Burnets, advertising their toxicity with red and black patterning; and their equally poisonous green and black larvae on Birdsfoot Trefoil. 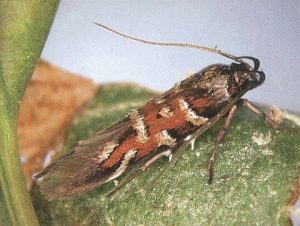 The most spectacular butterfly is the large Dark Green Fritillary, whose larvae feed on violets in open spaces. Also on violets, at the other end of the size scale, are the tiny caterpillars of Pancalia schwartzella, recently found at Braunton by Bob Heckford and Stella Beavan; the first records in England for 50 years. Pancalia larvae seem to feed only on violets growing among a particular moss species, in which the caterpillars pupate – some insects are quite unreasonably picky …

If Braunton moths are diverse, so are beetles, flies, bugs, and above all the Hymenoptera (wasps, ants, bees etc.), many of which are predators or parasitoids of the caterpillars. Quoting some spectacular examples: the rotund beetle Chrysomela populi, red and black and poisonous again, abundant on dwarf willow (the fat larvae exude aspirin-smelling froth when prodded); the fierce bronze and cream Dune Tiger Beetle, Cicindela maritima; the sand-coloured ground beetle Nebria complanata under jetsam on the strand-line; the rakish robberfly Philonichus albiceps, patrolling the sand for prey; the solitary bee Osmia bicolor, with larval cells in the snail shells that litter the dunes; predatory sand-wasps, Ammophila sabulosa, feeding their larvae on stung caterpillars; and pompiliid wasps feeding theirs on spiders.

Dragonflies (17 species recorded) haunt the moister areas in the slacks, and Bush-crickets, Platycleis albopunctata and Tettigonia viridissima, are splendid if you can find them. Etc etc. Braunton is good for insects …