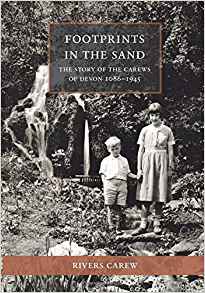 Rivers Carew was the last of the Carew baronets to live at Haccombe, the family seat, near Newton Abbot. The family left Haccombe on VJ Day 1945, never to return. Poignantly, the last to leave were Rivers’s mother, Lady Phyllis, his sister Oenone, and Nanny. They left the house to walk – there were no taxis due to the holiday – as it began to get dark on that August day, carrying their hand luggage to the Parsonage at Coffinswell, where they were to spend the night with the Revd Arthur Royston before travelling on by train to their new home in Dorset. After more than 500 years, the Carews’ connection with Haccombe had run its course. This highly readable and yet detailed account of the history of the Carews swiftly takes us from the Norman Conquest through Tudor times to the more heavily documented period since the eighteenth century. Charles Courtenay writes in his foreword that Rivers Carew provides a ‘sweeping narrative’ and Courtenay commends his ‘tireless unearthing of [the family’s] secrets’.

The Carew name can be traced back to Domesday book when Walter FitzOther was granted lands that belonged to Saxon lords before the Conquest. Walter’s son, Gerald, married Nest who brought the lands of Carew, close to Milford Haven, as part of her dowry. By around 1300, the Carews had various interests in Devon including Mohun’s Ottery, which became ‘the nest of the Carews’, where they were to remain for ten generations until the second half of the sixteenth century.

In 1425, Nicholas Carew married Joan Courtenay, elder daughter of Sir Hugh Courtenay by his second wife, Phillipa L’Erchdekne of Haccombe. In time Joan would inherit Phillipa’s property. Joan was born at Haccombe in 1411 and baptised in the Early English church, dedicated to St Blaise. The church was established as a chantry college for an Archpriest and five chaplains in 1337. The college was dissolved at the Reformation, but the title of Archpriest continues to the present day. The church features in Todd Gray’s Devon’s Fifty Best Churches.

Other Devon property that came into the Carews’ hands over time included Bickleigh Castle and Tiverton Castle and the activities and correspondence of each of these branches of the family is recounted.

The book includes enticing chapter sub-headings such as ‘Bessie’s Fiancé and an Affronted Queen’, ‘Tiverton En Fete’, ‘The Legend of Liszt’, and ‘A Brush with [James] Bond’. This hardback volume is handsomely illustrated, with a high-quality finish, and is of considerable interest to those seeking to know more of the Carews and their part in Devon’s history.