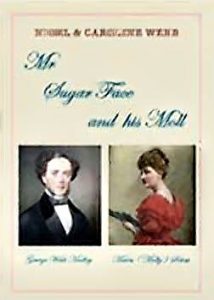 George’s wealth enabled the purchase of an experimental farm near Okehampton in the 1870s, ‘about 500 acres of bogland’ in his own description. This included Winsford House, later Tower, which was demolished in 1951. In the grounds, Molly developed walled gardens and erected two very large greenhouses. These gardens, forgotten and neglected for fifty years, have since been restored. Molly built Winsford Cottage Hospital in 1900 in George’s memory. Designed by C.F.A. Voysey, it was listed in 1978. The last patients left in 1998 and since then The Winsford Trust have worked hard to defend the building. Since 2017, it has been in the ownership of the Landmark Trust. Restoration, including that of the golden mosaic floor which runs the length of the building, is due to be completed this year.

The book is based on considerable research and is enlivened by entertaining quotations. It is likely to be of particular interest to those interested in the walled gardens or the hospital.