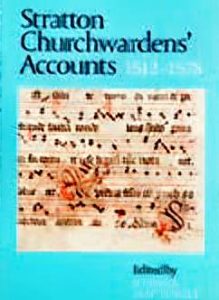 Joanna Mattingly has added greatly to our understanding of the sixteenth-century church in the Diocese of Exeter, and the society of which it was part, through her skilful editing of the Stratton churchwardens’ accounts and a set of general receivers’ or stock wardens’ accounts which cover part of the same period. As she points out in her authoritative introduction, these accounts are significant because of their rarity: only eighteen sets, country-wide, cover the years 1535–70 when most of the major changes of the Reformation were taking place.

In Devon and Cornwall, resistance to the Reformation culminated in the Western Rebellion of 1549, although the rebels would be defeated and thousands killed. But tantalising glimpses of what they were fighting for can be gleaned through Mattingly’s work. She notes that ‘contrary to experiences elsewhere, two new images were brought to Stratton church in 1538–39 and 1541–42, despite the 1538 injunctions’ (which had banned the veneration of relics and saints’ images). These, she suggests, were probably carvings commissioned in 1531 from John Daw of Lawhitton and John Pares of Northlew, Devon, whose contract for work in the church is published as an appendix in the book.

The accounts are full of human interest, with an excellent section – ‘Notes on People’ – in which information is compiled on individual characters, so that the reader does not have to search repeatedly through a comprehensive index of people and places. A separate index of subjects adds to the ease with which the transcribed accounts can be negotiated.

For this reviewer, material on Stratton church house and its role in the social life of the community is especially interesting. Details are given of church ales, and entertainment ranging from Robin Hood plays to travelling musicians, and a visit by a bear and its bear-wards. Moreover, pictorial plans of the church house, church and marketplace, dating to 1583, are reproduced – rare survivors indeed.

Joanna Mattingly’s credentials for a project of this nature are impeccable – she has devoted over thirty years of study to Cornwall’s late medieval churches and their records. Her edited accounts reveal the huge impact the Reformation had on the church and its community in a single parish. Importantly, she gives a voice to those ordinary people whose names were scratched into the wardens’ books nearly half a millennium ago, but who otherwise remain unknown to us. For all students of the medieval period, and those interested in our ancient parish churches, Mattingly’s book is a must read. We should be grateful for her erudition and her devotion to task.