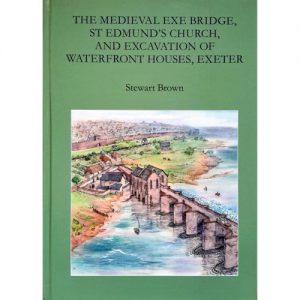 The first stone bridge across the River Exe at Exeter was built c. 1200 along or close to a Saxon ford when the river (at least at this location) was much shallower and much wider than it is today. Adding in the ramps at both ends, the narrow 17- or 18-arch structure was about 240 m long, and there were two chapels built on the bridge itself – St Edmund’s and St Mary’s. A third chapel, St Thomas’s, was located on the river bank near the south-western end. Multi-storey houses and shops later encroached upon both ends of the bridge and there was increasing waterfront development on the city side.

The south-western half of the bridge was subsequently demolished to make way for the much shorter, triple-arch Georgian bridge (c. 1772), while the north-eastern half was eventually buried during the development and progressive reclamation of Exe Island. The Georgian bridge was succeeded by an Edwardian single span steel bridge, completed in 1905, and the present concrete twin bridges were completed in 1969 and 1972, respectively.

Exeter City Council’s landscaping of the area around the concrete bridges involved the demolition of derelict buildings and removal of much debris from the former City Brewery, which was known to overlie the north-eastern remains of the medieval bridge. More of the original fabric was exposed than expected, and the remains, now high and dry, include half of the old bridge (the roadway restored in 1974, arches, piers and cutwaters) and the ruins of St Edmund’s church.

The impressive quality of the newly exposed finds prompted the Council and the Archaeological Section of the DOE (now English Heritage) to initiate a project to record the standing remains and excavate the medieval and later houses in the surrounding area. The work was carried out by Exeter Museum’s Archaeological Field Unit between 1975 and 1979, much of it under the supervision of Stewart Brown, the principal author of this monograph. A lack of funding, however, precluded extensive publication of the results until the impending closure of Exeter Archaeology in 2011 led to renewed funding by the Council, and further support from English Heritage in 2018 saw it through to fruition.

The main body of this monograph (pp. 1–118) deals with the physical setting of the bridge, the early river crossing, the historical background of the study and the recorded remains, including the structure and construction of the bridge and the buildings that were built on top of it. The results from the excavation of the waterfront houses c. 1200 to 1950 are also detailed, as well as the archaeological and historical context of the early medieval and later Exe bridges. There are also nine appendices (pp. 119–180): pottery and other artefacts (John Allan), tree-ring dating (Cathy Tyers); the Exe Bridge Trust and wardens’ accounts (Stewart Brown); transcriptions of the wardens’ accounts of 1343–52 (Paul Staniforth); medieval property deeds relating to the estate of the Exe Bridge wardens (Peter McKeague & Bruce Watson); animal bones (Bruce Levitan); the medieval stained glass of the church of St Edmund (David Cook); and the history of the City Brewery (Tony Collings).

The book is copiously illustrated with historic paintings and drawings, photographs, maps, elevations, and meticulously detailed excavation plans and cross- sections. Especially eye-catching is the series of brilliant line drawings by Richard Parker, showing reconstructions of how the medieval bridge and the Georgian bridge and environs may have looked from the air c. 1250, c. 1450, c. 1750 and c. 1860.

This work is a major contribution to the history of Exeter and its medieval bridge – one of the best-preserved structures of its type in the country. The book is available at the Exeter Visitor Information Centre, the Custom House and Exeter Underground Passages.