Cullompton. Report from the Botany Section

Cullompton lies in the Culm Valley, close to the border between two Natural Areas: The Devon Redlands to the south and west of the town, and the Blackdown Hills to the east. The River Culm rises near Culmhead in the north of the Blackdowns Area of Outstanding Natural Beauty and flows west, then southward to join the Exe at Stoke Canon.

The landscape of the Blackdown Hills is intimate and enclosed as a direct result of low intensity livestock farming. There is a sense of remoteness and tranquillity here, in an area punctuated by small villages and isolated farmsteads. It is these factors together that give the Blackdowns their special character.

From the steep, north-facing scarp rising from the Vale of Taunton, the Blackdown Hills dip gently southwards as a flat-topped but dissected Greensand plateau that was dominated by heathland until 50–60 years ago, but now only a few blocks remain. Following the Second World War, some of this hill-top heathland was converted into coniferous plantation. An example can be found a little to the east of Cullompton around Sheldon and Blackborough, which was once the centre of a whetstone mining industry. The most extensive area of heathland now is on Blackdown & Sampford Commons, a Site of Special Scientific Interest that embraces Culmstock Beacon, with its conspicuous domed stone beacon hut.

Beneath the porous greensand there is an impervious band of Keuper Marl at the junction of which springs emerge, and it is this spring-line of ill-drained mires that provides the area with its habitat of greatest botanical interest. Spring-line mires, dominated by rushes and Purple Moor-grass, are typically species-rich places, with some combination of Bog Asphodel, Common Cotton-grass, various sedges, Meadow Thistle, Heath-spotted Orchid and Devil’s-bit Scabious, among many others. The wettest parts are characterised by clumps of bog-mosses amongst which several insectivorous plants occur, including Pale Butterwort and Round-leaved Sundew, whose leaves are covered with hairs each with a glistening sticky bead of ‘dew’ at its tip, making the plant fatally attractive to insects. Rarities of these places include White Beak-sedge, Lesser Butterfly Orchid, Oblong-leaved Sundew and Early Marsh Orchid, that has its county stronghold on Blackdown & Sampford Commons.

Colliton Moor, not far to the south-east of Cullompton beyond Dulford, is a privately owned County Wildlife Site of considerable interest to the botanist, again because of its mire plant community that includes the locally threatened Petty Whin, Black Bog-rush and hopefully still Floating Club-rush. Another site on the edge of the Blackdowns, in Culmstock parish, is Maiden Down, a SSSI that at one time, was known for a number of rarities including Marsh Clubmoss but the site is now in poor condition and it is probable that most species of interest have been lost. 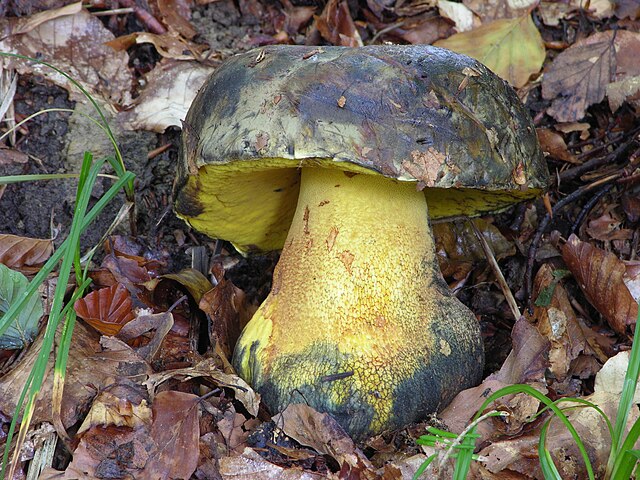 To the south of Cullompton toward Exeter and in the Devon Redlands Natural Area, Ashclyst Forest deserves mention for its extensive mixed woodland some of which is semi-natural. Ashclyst is well-known for its butterflies but it is also of interest to the mycologist. Among Boletes, the striking golden-yellow tubed Aureoboletus gentilis occurs here as does the uncommon Boletus torosus.