Cullompton. Report from the Buildings Section

The street plan of Cullompton still reflects its medieval layout. Most shops lie along Fore Street with courts behind linked by alleyways, many with the full extent of their original burgage plots. The length of the high street signals the prosperity of the town from the C16th to the C18th when it was a centre of the cloth trade. There are comparatively few listed buildings, which may reflect the devastation caused by fire in 1838, when about two thirds of the town was destroyed.

Most of the listed buildings lie along or just off the north-south high street. Slightly to the north, in Higher Street, are Trott’s Almshouses (grade II) founded in 1522 but much restored. Moving south into High Street, numbers 38, 40, 42 and 44 (grade II) form a terrace of mid C19th houses. Further along, number 28, now Barclays Bank, is a Regency house of red brick with two shallow full-height bows and a pedimented Doric doorcase. 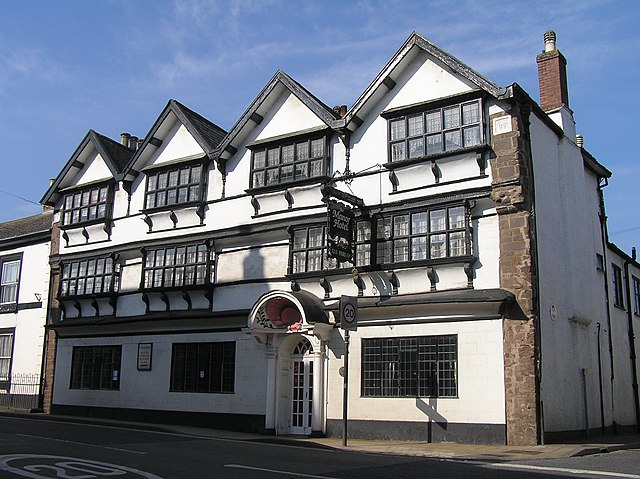 An important cluster of buildings in Fore Street is formed by the Manor House Hotel (part grade II* and part grade II), Walronds (grade I) and 8 Fore Street (grade II*). The Hotel, formerly a merchant’s house, was built in 1603 and extended in 1718. It occupies the front of a medieval three-room tenement and the main entrance under a shell hood marks the former through-passage. Number 4 next door, now part of the Hotel, is mid C19th, although part of a building of 1703 may survive concealed. It occupies a key position between the Hotel and Fore Street’s grandest mansion, Walronds.

This handsome symmetrical house of 1605 consists of a three-storey main range recessed between a pair of long two-storey wings. A traditional plan is respected with a moulded screen separating the hall from the passage way. The house is graced with further panelling, decorative plasterwork, ornate fireplaces, one dated 1605, a staircase in each wing and many other fine features. It was rescued from dereliction by the Cullompton Walronds Preservation Trust and expertly restored. Immediately beyond lies 8 Fore Street, a handsome half-timbered former merchant’s house of the C17th that completes this attractive group.

The listed buildings (grade II) continue on this western side of the road (10 to 32 except 28), with only a few on the east (1, 21, 39 and 41). These are mainly early to mid C19th shops with dwellings over, some with C17th or earlier cores. Among all the shops, the White Hart Inn (grade II) stands out, with its porch of Tuscan columns. What can be seen is early C19th but there is almost certainly an older core.

Turning into Church Street, the shop fronts soon disappear to be replaced by a rather elegant c. 1840 detached town house, St Patrick’s (grade II). Beyond is a glorious sight – the decorated staged tower of the parish church of St Andrew (grade I). The nave and north and south aisles date from probably the first half of the C15th, with the Lane aisle (outer south) begun in 1526 and the tower in 1539. Among the many delights of this magnificent church are the fan vaulting in the Lane aisle, the superbly coloured full-width chancel screen and the Golgotha, an oak rood beam roughly carved with rocks, skulls and bones.

The setting of the church is enhanced by the picturesque dwellings around it, most of which are listed (grade II). The wonderfully named Nork House on the east side is of red brick set with blue-black brick, terracotta and Portland stone details. Nearby is Old Chimes, of mid C19th construction but possibly the remodelling of an earlier house. To the south, The Retreat and adjoining Church Cottage, and numbers 4 and S Gravel Walk are of plastered cob and date from the C17th. Other buildings of note outside Cullompton town include Hillesdon House to the west and Langford Court in the south-east (both grade II*).