In a paper I read before this Association at Sidmouth in 1873, on “Some Unrecorded Hill Fortresses near Ashburton”, while describing the so-called Roman camp, an earthwork on the elevated peninsula of Holne Chase, I mentioned a find of several iron bars about fifty yards outside the fosse, which at the time were supposed to be unfinished weapons (” Trans.,” Vol VI, p. 264). The discovery came about thus. In 1870 Sir Bourchier Wrey’s gamekeeper, while digging out a rabbit from among a clitter of rocks between the camp and the River Dart on the west side, came upon about a dozen flat iron bars packed together on a flat stone with another stone laid on the top, the whole embedded in peat earth among the roots of oak coppice. The bars resembled heavy spear-heads, were twenty-four inches long and two inches broad, tapering slightly to a flat point at one end, while the other was bent round as if to receive a shaft or form a handle. Unfortunately the man broke most of the bars against the rocks, but carried two or three back to the house, where the gardener used them for supports under a cucumber frame. 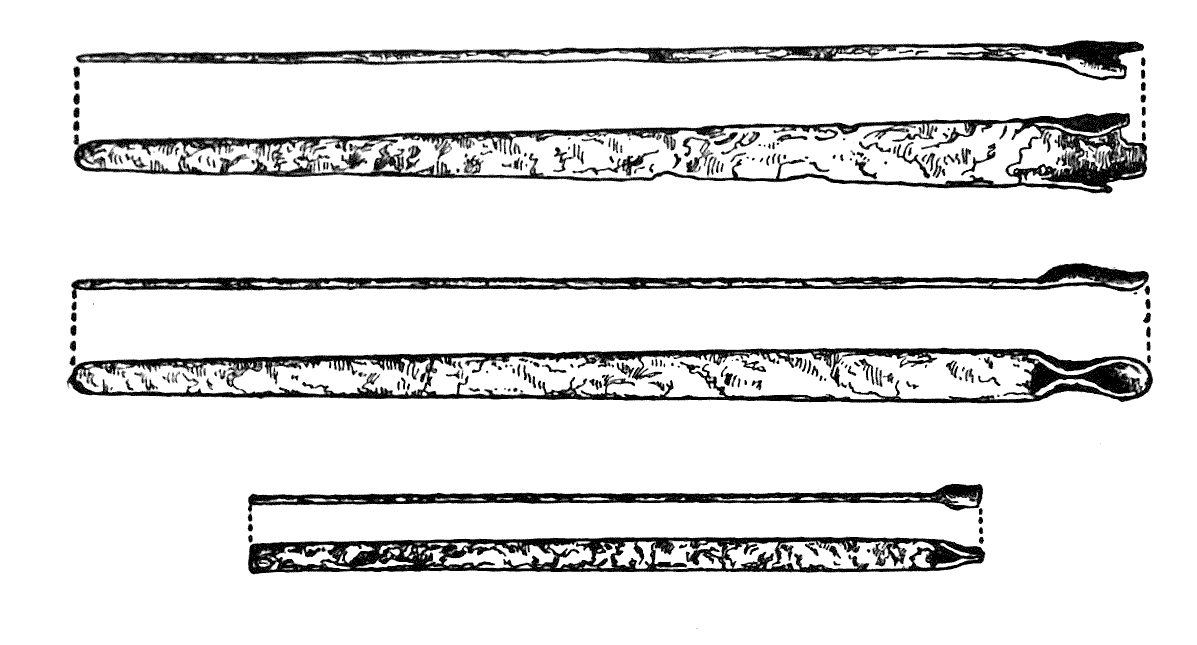 I first heard of this find in July, 1871, when examining the camp with Mr. Spence Bate, F.R.S. Being anxious to get a sight of the bars, I subsequently called at the gardener’s and managed to secure some fragments, for they had been still further broken across. I then obtained one specimen showing the flat point and another with a portion of the folded end, but all was a brittle mass of rust. These fragments I showed to several members of the Association meeting at Bideford in 1871, among them to Mr. 6. W. Ormerod, F.G.S., Mr. E. Parfitt, and Rev. R. Kirwan. By Mr. Ormerod’s advice I sent a portion of the iron to Professor Church of the Agricultural College, Cirencester, in August, 1871, with inquiries.

The iron weapons to which you refer have fairly puzzled the antiquaries. They have been found in several places in England, sometimes in considerable numbers. They appear to be unfinished straight swords, but whether they are Roman or not is a question of great difficulty. They are smaller in size than any known forms of gladius or glaive of the Roman times. Yet it is not impossible that great variations in this particular may have occurred. The sword in our museum is of about their size (from Bourton-on-the-Water where it was found with many others). I do not entertain the faintest doubt of the antique character of your swords. They, however, are quite unlike the heads of the pila as far as known to us from sculptures, Roman remains in Gaul and Italy, etc.

In September, 1871, Mr. 6. W. Ormerod sent my most perfect specimen to Professor Ramsay. In October, 1871, Mr. Ormerod enclosed me the reply he had received, stating that he had deposited the specimen in the Museum of Practical Geology, also Professor Reeks’ replies to the questions I submitted as follows :

I received your letter and the weapon yesterday. I have put it into the hands of the proper man, Mr. Reeks, and it will go into the museum. I wish your friend had been able to spare us one of the pointed ones, but I suppose he could not do so. I do not believe any man can tell whether the iron is ancient or mediaeval, or later, composition would give no hint. I do not think they are at all likely to be Roman, at least they are not at all like any Roman spears or other weapons I have ever seen. They seem to have been rude pikes of some sort. Reeks or Ruddler will write a letter of thanks.

Ever yours truly,
ANDR. RAMSAY.

From Mr. Reeks to Mr. Ormerod.

Replies to Mr. Amery’s questions respecting a fragment of an iron implement sent by Mr. Omerod to the Museum of Practical Geology, October, 1871.

1. There appears no evidence to prove that the iron of which this implement is formed is of any great antiquity. It appears to be ordinary wrought or malleable iron, and exhibits a fibrous structure at the fractured end. The surface is covered with a thick coating of hydrous peroxide of iron, which is crystallized in some of the cavities. The time required for this oxidation of the metal must depend on the conditions to which it has been exposed, but might under favourable circumstances be effected in a comparatively short time, and certainly does not by itself bespeak any high antiquity.

2. It is difficult to assign any date to this implement. Iron weapons referred to the Anglo-Saxon period are not uncommon, but they differ from the implements in question.

3. As the edges are thick and blunt the implement could not have been used as a cutting instrument, but its point at the end may have rendered it useful as a thrusting weapon. At the same time it seems doubtful whether it is really a weapon at all, but its use could be better determined by examination of a specimen more perfect than the one now sent.

4. It does not appear to resemble the iron head of the Roman pilum carried by the pilerii.

5. There is no reason why it should not be an English implement of modern or mediaeval date. But on this point, as on the other question, the opinion of a competent antiquary should be consulted.

This ended the inquiry, and I put away the fragments and made no further investigations.

In September last (1905), when visiting the County Museum at Reading, I noticed a group of iron bars similar in appearance to those found thirty-five years before in Holne Chase, and labelled “Supposed British period weapons”. On inquiry of the Curator, Mr. Colyer, I was informed that Mr. Reginald A. Smith, F.S.A., of the British Museum, had been interested in the subject and was making investigations on the character of these iron bars of British origin, and I gave him some particulars of those found at Holne Chase, of which he made notes. In November I heard from Mr. Reginald Smith asking for full particulars, which I gave him, and he kindly sent me a copy of his paper on “Ancient British Iron Currency”, read before the Society of Antiquaries on 26 January, 1905, in which he states that these iron bars have been known for many years, and have gone under the name of unfinished or unforged sword-blades, but they have received no special attention. The bars roughly resemble swords, and consist of a flat and slightly tapering blade, the edges of which are blunt and vertical and the faces parallel. A rude handle is formed by turning up the edges so as to meet one another at a point about two inches from the end. The average length of the twenty pieces he had examined was 2 ft. 7 1/2 in., the greatest width usually 1 1/2 in., while the narrow end is square, not pointed, and is usually 3/4 in. wide. An important point, he observes, is that such bars have often been found secreted in considerable numbers. They have been found buried in the centre of British camps. And it seems much more probable that the Ancient Britons would conceal their money at a crisis than that they would bury half-made swords. It must be remembered that in such a society division of labour was not in an advanced stage, and the smith who shaped these bars would have himself produced the finished article if swords they were to be. He would not have prepared a large number to hand on to another to finish. There is too much metal in them for the manufacture of a sword of the period. Mr. Smith gives the following particulars of eleven such finds, and the museums in which they are deposited, which show a wide distribution which may carry conviction as to their use.

The object of Mr. Smith’s paper is to suggest that these iron bars are none other than the identical iron currency or money of certain British tribes as described by Caesar in the Fifth Book of Commentaries. He goes into a long argument on the various readings to show that iron bars may be read in the passage usually translated iron rings.

By an examination of the weights and lengths of the recorded groups of bars he finds them divided into three sets. The lighter ones average just under 4770 grains or 11 ounces, which he presumes the standard weight; the twenty of the next set average 8969 grains or 20 1/2 ounces, the weights ranging between 16 1/4 and 26 1/4 ounces: these he calls double weight; then come two heavy ones averaging 18,238 grains or 41 ounces, being a little below the quadruple weight of 19,080 grains or 43 1/2 ounces. It may be assumed that the conditions affecting decay were not uniform, but the slightness of the margin affords a good presumption that these denominations of weight were current among the Britons occupying the Western strongholds in the first century B.C.

Mr. Smith mentions a recent coincidence. Near Neath, Glamorganshire, there has been found a series of late Celtic bronzes, evidently a hoard, including a weight of 4770 grains. It is of a common Roman form, cheese-shaped, with “I” incised on the top. A similar weight, but made of basalt, is in the museum at Mayence, probably found in that neighbourhood. It is 4767 grains, and may be considered identical with that from Wales. This near agreement with the calculated standard of the iron bars is very remarkable, and makes it probable that this was the unit of weight in Britain and Western Europe, and of our smaller iron bar currency, the others being twice and four times the unit respectively.

I have searched out the fragments in my possession and find the effect of thirty-six years’ exposure to the atmosphere, has caused a disintegration of the structure of the iron, which has separated into thin plates lengthways like the leaves of an old book : these are exceedingly brittle and will scarcely bear lifting. The great value of the whole subject is its bearing on the antiquity of the use of iron and the glimpse we may have of early commerce in Danmonia, and is my apology for recording the find of iron bars near Holne Chase Castle.