Dartmouth. Report from the Botany Section

On the 30th January this year, the Devon Local Nature Partnership launched a list of the County’s ‘special’ species at an event at County Hall. This includes a ‘short list’ of ‘flagship’ species, the “species for which Devon has a particular responsibility to ensure their continued survival in the British Isles”. The short list includes 18 species, or groups of species, of flowering plants, of which at least seven can be found within ten miles of Dartmouth.

Just to the north, with its combination of climate and geology, Torbay is a biodiversity hotspot. Chalk and limestone are scarce in Devon, but the Devonian limestone grassland and cliffs here support a unique assemblage of plants, including some very rare species amongst the characteristic plants typical of this habitat.

At Berry Head, White rock-rose Helianthemum apenninum has been regularly found from the early 1800s to the present. Its only other location in Britain is at Brean Down in Somerset. Another rare plant, Goldilocks Aster Aster linosyris, occurs at only about half a dozen sites along the south and west coasts of Britain. It has been known since at least the 1830s from the Berry Head area, where it occurs in open, species-rich grassland.

Along the coast to the south of Dartmouth, Slapton Ley is a renowned wildlife site. Although there are casual records elsewhere, Strapwort Corrigiola litoralis as a native plant is confined to shingle at the margins of the Ley. An early record was for ‘Dartmouth’, but this presumably referred to the nearest sizeable town. 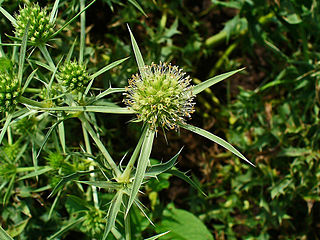 Eryngium campestre.
Image from Wikimedia Commons – click on it for details

Two plants whose long-standing core areas are further afield have outliers in the Dartmouth area. Field Eryngo Eryngium campestre was recorded by John Ray at its classic site at Devil’s Point in Plymouth in 1662, but it also occurs in dry open grassland at Scabbacombe, where there are populations both inside and outside of the SSSI boundary (Natural England 2017). Toadflax-leaved St John’s-wort Hypericum linariifolium, whose stronghold is on the rocky slopes of the Teign Valley also occurs at Froward Point.

Bastard Balm Melittis melissophyllum is scattered in shady places across much of Devon, but its national distribution shows that it is mostly confined to the West Country and West Wales, with its core area in Devon. In the vicinity of Dartmouth it has been recorded most recently at Scabbacombe Head and Churlston Cove on the coast and in the woodland of the Dart valley.

The Rock Sea-lavender ‘aggregate’ Limonium binervosum agg. includes, in Devon, three species with five subspecies. All of these have very limited UK distributions, some are endemic to Britain and some endemic to South-west England. Possibly the rarest is Limonium procerum subsp. devoniense, which occurs on coastal rocks in Torbay and nowhere else in the world.

I have mentioned the rare species in the context of the recent Devon Special Species Launch, but, to me, the pleasure of botanising in an area such as the surroundings of Dartmouth is not so much encountering the rarities, which everyone knows to be there, but in all the other rare, not so rare, and common species that one encounters on the way.

Full accounts of the distribution of these species and others in the Dartmouth area can be found in A New Flora of Devon (Smith, Hodgson & Ison 2016), especially in the section on the Flora of the Torbay Limestone.