Insects – when will people realise they are fascinating? 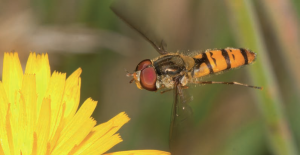 Back in March 2019, Will Hawkes, a PhD student at Exeter University’s Penryn campus, gave a superb talk to the Entomology Section on insect migration. It was astonishing stuff. Trillions of insects constantly detectable by radar migrating huge distances at high altitudes. Half inch-long Marmalade Hoverflies, common in our gardens in summer, migrating hundreds of miles annually to Southern Europe and crossing the Alps in thousands against 18 mph headwinds. Hummingbird Hawkmoths and others migrating up Europe, following the wave of new vegetation northward each spring. Inch and a half long Globe-skimmer Dragonflies travelling thousands of miles across the Indian Ocean, from India to the Maldives to Mozambique and back, following the winds and the rains to breed in short-lived, predator-free pools. Aphids travelling great distances high up in the winds – with their predators and parasites following them. Insects navigating by the sun, using an internal clock to adjust for its daily movement across the sky, or using the polarisation plane of the light instead when the sky is overcast. These migration patterns are all genetically determined, since the insects can’t learn from their long-dead parents.

It was one of very best talks I have heard this year, and I have been to plenty, by excellent speakers on history, archaeology, buildings, art; all the usual subjects that people attend in droves. Will’s audience was just eleven, and I wrote an anguished entry on the DA Facebook page, ending with ‘When will people – DA members, the general public, the BBC, politicians – realise that insects are not only fascinating and beautiful, but crucial to the survival of the living world – and of us?’.

Insects and entomologists face an image problem. Entomologists are nerds with butterfly nets who stick insects on pins. Insects are ‘creepy-crawlies’ (all right, so butterflies and ladybirds are nice, and bees are important, but as for the rest …). No. Insects are extraordinarily diverse, amazing animals with outstanding capabilities and complex behaviours and life histories. Entomologists are ordinary people: scientists, amateur and professional, who appreciate the fascination of insects and their crucial – and I mean crucial – importance to humans and to the world in general. The vertebrates-obsessed BBC doesn’t help. Insects get minimal coverage on television. 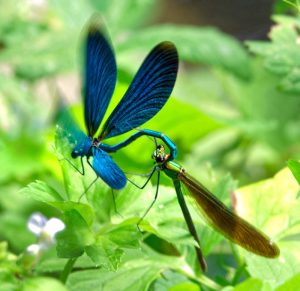 Annually and repetitively in Spring we get fluffy chicks and in Autumn those wretched rutting stags – great smelly bellowing dunces with names like Caesar and Attila banging their heads together and ravishing the hinds; contrast the graceful aerobatic battles and balletic courtship flights of iridescent blue damselfly males over Dartmoor streams in June and July. Like these, many insects are extremely beautiful: not just the showy butterflies, but dragonflies, hoverflies, leaf-beetles, bee-flies feeding like tiny, furry hummingbirds at primroses in April, intricately brocaded and camouflaged moths almost invisible during the day when birds are active.

Insects are amazing. A few random examples. Hoverflies, the world’s most perfect flying machines. Fleas and flea-beetles catapulting themselves into the air using rubber pads in their knees. Microscopic fairy-flies, a fifth of a millimetre long with wings like feathers, flying down through the water surface to lay eggs in those of water beetles. Eyed Hawk Moths raising their camouflaged fore wings and glaring at predators with huge eyespots on their hind wings. Swallowtail butterfly caterpillars that rear up like snakes when threatened and stick out bogus forked tongues. Termite nests with built-in air-conditioning. Beetles folding and unfolding their map-like hind wings, without internal muscles. Quake-resistant, weatherproof wasp nests of purpose-made paper. Fragile insect wings, the world’s smallest, smartest aerofoils. Male crickets, mosquitoes and fruit flies singing to females. Saucer bugs breathing air for months underwater, without ever coming to the surface. Ants sewing leaves together using their grubs as needles or harvesting leaves to cultivate fungi as food. Harmless insects mimicking dangerous insects, or spiders, or bird-droppings, or reptiles. And conversationally dancing bees.

Give the insects a chance. Come on an Entomology Section field trip!

Home > Devon > Insects – when will people realise they are fascinating?