John Lethbridge and his Diving-Machine (1880)

In May, 1879, Mr. W. Nosworthy, of Manaton, a member of this Association, invited my brother and myself to his house to examine some coins which had recently been found in the roof of an old building close by, of which Mr. Pengelly gives us an account. Whilst at his house Mr. Nosworthy showed us a very fine silver tankard, apparently a whistle tankard, which had been in his family for several generations. 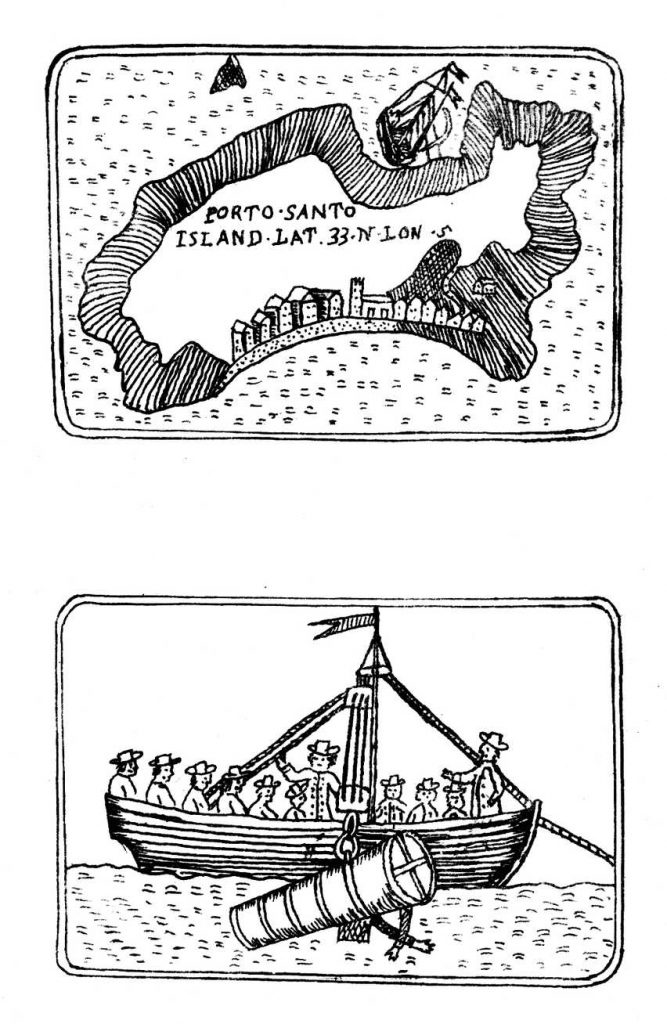 This tankard, which would probably hold about three pints, had two very curious engravings on it, and between them a coat of arms. On the one side the engraving represented an island with a town on it, and the words PORTO SANTO ISLAND, LAT. 33 N. LON. 5; and on the other side was a barge on the sea full of men, from which was being raised or lowered a large conical object, at first sight not unlike a large cannon. On the handle were the following initials, L / IE. During the last century it was usual to place initials in this way, the single letter on the top being the initial of the surname, and the letters below those of the Christian names of the man and his wife. Mr. Nosworthy had been unable to get any clue to the meaning of these engravings, nor did he know to whom the initials referred. Having heel-ball and suitable paper with me, I was enabled to take some rubbings. Referring to my heraldic index I found that the arms – viz., a bridge of three arches turreted, in chief an eagle displayed – probably belonged to a Lethbridge; this was further supported by the letter L in the initials.

After several fruitless enquiries and searches for persons of the name of Lethbridge, I one day found the following in Lysons’ Devon* under the head of Wolborough:

“At this place lived Mr. John Lethbridge, not so well known as he deserves to be, as the ingenious inventor of a diving-machine, by which he was enabled to recover goods from wrecks at the bottom of the sea, without any communication of air from above.” Porto Santo was also mentioned as one of the places where he had dived on wrecks. From this I was convinced that I had found my man, and that the curious object engraved on the tankard was his diving-machine. Thinking an account of him might be interesting, I shall give all the particulars that I have been able to gather about him.

It appears that a Mr. Symons, of Harberton, near Totnes, claimed to have invented a diving-machine, and in a letter written by a Mr. Ley, to the Gentleman’s Magazine, July, 1749, accused Mr. Lethbridge of robbing him of his invention; thereupon Mr. Lethbridge writes to the same magazine denying the accusation, and giving a full account of his own invention. If it had not been for these letters we should probably have lost all traces of its history. Mr. R. Dymond having with his usual kindness copied the longest of these letters for me from the Gentleman’s Magazine, I am enabled to give them in full.

” A DESCRIPTION OF A DIVING-SHIP MADE SOME YEARS SINCE BY NATHANIEL SYMONS, OF HARBERTON, NEAR TOTNE8.

“Mr. Symons was a common house carpenter, of Harberton, who invented a diving-boat as follows: ‘Though I did not see it I shall trouble you with such a description as my memory will permit, after so long a time as twenty years, and which I had from the inventor himself.

“‘He made his boat in two parts, and joined them in the middle very tight with leather, that no water could get in; he made a false door in the side, which, when he was in, shut very tight; and though his going in admitted a small quantity of water, it was no inconvenience. After this outer door was shut he opened the inner one to get into his boat.

“‘ There was more than fourscore weight of lead to the bottom of his boat (but this I presume must be according to the dimensions of the boat). Though the boat would swim when extended to its full dimensions, yet he had a screw to each side of his boat, which, when within it, he could manage himself and which, by means of the leather that joined the parts of the boat, contracted them to that degree that the boat would sink.

“‘ He went into the middle of the river Dart, entered his boat by himself in sight of hundreds of spectators, sunk his boat himself, and tarried three-quarters of an hour at the bottom; and then by extending it with his screws he raised it to the surface again without any assistance. He said that though at last the air began to be thick he could bear it very well.

“‘This same person invented the famous diving-engine for taking up of wrecks, though his cousin L—e deprived him of both the honour and profit.

“‘And though a great number of gentlemen of worth were present at shewing his boat, he told me he received but one crown piece from them all. I think he has been dead some years.

“‘ If any of your correspondents can make any improvement from this imperfect account I shall be very glad, who am with all sincerity.*

“P.S. – I would not be misunderstood in saying that I am the first inventor of a diving-engine without communication of air, for I mean such as to work about in so small a quantity of confined air; for otherwise I should assume the invention of a diving-bell engine (to assist naked divers), invented by Sir Wm. Phips in the reign of King Charles II., which was improved by Dr. Halley, who frequently conversed with me on account of my invention, and said he never thought any man could invent a machine to work about himself in so small a quantity as six ounces of confined air.*

After Mr. Lethbridge had completed his machine he appears to have offered his services to some London merchants to adventure on the wrecks of some treasure ships then lately lost; but it was some time before he found any who had sufficient confidence in the success of his experiments to offer him terms at all adequate to his deserts and expectations; but after his success had been proved, he was employed to dive on wrecks in various parts of the world, both for his own countrymen and for the Dutch and the Spaniards.

At the house of his grandson, John Lethbridge, at Newton, was a board, on which was an inscription, in gold letters, dated 1736, stating that John Lethbridge, by the blessing of God, had dived on the wrecks of four English men-of-war, one English East Indiaman, two Dutch men-of-war, five Dutch East Indiamen, two Spanish galleons, and two London galleys, all lost in the space of twenty years; on many of them with good success, but that he had been very near drowning in the engine five times. The apparatus, about the year 1800, was said to be at Governor Holdsworth’s, at Dartmouth, but in a decaying state.

Mr. Lethbridge is thus noticed in the register of the parish of Wolborough: “December 11th, 1759. Buried Mr. John Lethbridge, inventor of a most famous diving-engine, by which he recovered from the bottom of the sea, in different parts of the globe, almost £100,000 for the English and Dutch merchants which had been lost by shipwreck.”

It is said his most laudable endeavours were so far crowned with success that he was enabled not only to maintain his family, but to purchase the estate of Odicknoll, in the parish of Kingskerswill.

There is reason to believe that Mr. Lethbridge was the first person who, by his ingenuity and intrepidity, succeeded in recovering goods from wrecked vessels. Though Phipps’ diving-bell was a prior invention, there is no record of its having been successfully used for practical purposes.

In the same year, 1715, that Mr. Lethbridge invented his machine, the following account of another sort of diving-engine appeared in the Exeter Mercury; or, Weekly Intelligence of News, 2nd September, 1715. (From the column of London Intelligence, dated 30th August):

“Yesterday in the Afternoon his Majesty (Geo. I.) the Prince and Princess &c. went to take the Air in their Barge; during which an Experiment was made of a Diving-Ingine of a new Invention in which a man walked at the Bottom of the River from Whitehall almost to Somerset House, being under water three Quarters of an Hour. This Ingine is said to be invented by one Major Becker and they say it’s the best of the kind that ever was heard of. It was made of Leather with Glass Eyes in such a manner as the use of his Hands and Feet were entirely preserved. For Conveniency of air a long Pipe was fixed from the Engine to a Vessel, and at the top of the Pipe was a Man planted, who by that Contrivance could discourse with the Diver the whole Time.”

To again return to the subject of the tankard. The date of it from the plate mark appears to be 1676, many years before the invention of the machine, and I should therefore be inclined to think it is very probable that this tankard, amongst other valuables, had been recovered by Lethbridge from some wreck at Porto Santo; that he had received it in perhaps part payment for his services, and so had a sketch of both the island and the machine engraved on it; and thus it has now been the means of awakening fresh interest and enquiries on the subject.

In conclusion, I wish to acknowledge my thanks to Mr. Nosworthy for allowing me to exhibit this valuable and interesting tankard to this Association.