Launceston. Report from the Buildings Section

The attractive mix of historic buildings in Launceston, representative of all ages and styles of architecture, complement the town’s dramatic natural setting. At the centre, and dominating so many of the vistas, stands the romantic ruin of Earl Richard’s castle (scheduled monument). This magnificent structure forms part of the historic heart of Launceston which is teeming with listed and historic buildings including: remnants of the town walls (grade II); Southgate, one of the original town gate houses (scheduled monument and grade I); St Mary Magdalene, a highly decorated sixteenth-century parish church (grade I); 13 High Street, a timber framed house built for the merchant Thomas Hicks in 1555 (grade II*) and the White Hart Hotel, whose eighteenth-century symmetrical façade incorporates a Norman chapel doorway (grade II).

Whilst a notable feature of Launceston’s built environment lies in its eclectic design, there are certain predominant materials and styles that could be termed characteristic. The earliest status buildings such as the castle, churches and abbey are all granite and slatestone and stone was later used for public, commercial, religious and domestic  buildings throughout the town. Many historic buildings have Delabole rag slate roofs, some of which are built in diminishing courses, with mitred hips. Slate hanging is also found, particularly on some of the older cottages and town houses, where in some cases it conceals ancient timber framed structures. The combination of the warm ochre tones of the slatestone, the sandy-grey granite, pearl-grey slate and the white of the rendered walls forms a subtle palette throughout the town. In contrast, complementary accents of imported materials can be found including: Castle Street, where the eighteenth-century town houses are built in highly-prized red brick, a status material; the late nineteenth-century Oddfellows Hall, Western Road (grade II) whose red brick walls are enlivened with flamboyant white stucco plaster detailing, and the decorative terracotta detailing on the towering rendered walls of the Passmore Edwards Institute, Wooda Road.

Throughout the centre of Launceston the surviving original shopfronts, predominantly nineteenth and early twentieth century, add to the quality and variety of the townscape. Whilst many are of traditional symmetrical design with wooden pilasters, stallrisers and fascias there are a number with more unusual features such as elegant polished stone pilasters and wooden barley twist mullions. 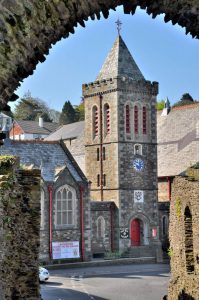 There is a wealth of interesting architectural features in the town. Some of the earliest examples of town houses in Cornwall, dating from the 16th century, can be found in Launceston and neighbouring Newport. Surviving features such as chamfered granite arched doorways, moulded corbels and stone mullion windows can be found including 11, 13 and 13a High Street (grade II*) and houses on St Stephens Hill. There are classical buildings with incised stucco, large sash windows and decorative cornices, the best examples of which can be found in Castle Street including Lawrence House and Museum (grade II*) built in 1753 and the Eagle House Hotel (grade II*) built in 1764. The Victorian Gothic period is well represented by villas, shops, chapels and public buildings featuring arched windows, stringcourses and stained glass.

Some of Launceston’s key buildings were designed by prominent architects. The Market House (grade II) was built to designs by George Wightwick, with a plain exterior and large spacious interior lit by a central clearstory. The Plymouth architects Hine and Norman designed the Wesley Methodist Church, Castle Street (grade II) in 1870 described by Pevsner as “one of the most ambitious churches of Cornish Methodism”. The town had its own highly regarded architect, Otho B. Peter who assisted Hine and Odgers in the design of the Guildhall (grade II) in 1881, in the Gothic Revival style with red sandstone arms by Harry Hems. Peter designed the neighbouring Town Hall in 1887 with an impressive memorial window by J. T. Fouracre of Plymouth.