Old Traine, in Modbury; the House and its Early Owners (1927)

When the enraptured traveller through our glorious Devon approaches the old-world town of Modbury from its northern side—journeying, maybe, from Dartmouth and through the characteristically Devonshire village of Brownston – he arrives at the top of one of Modbury’s three steep streets; and, before descending halts to notice the imposing frontage of the handsome residence of John Andrews, Esq., J.P., its public-spirited owner. On the opposite side of the road is the interesting old doorway entrance to Old Traine — also owned by Mr. Andrews, whose kind aid, by loan of valuable MSS., has made this Paper possible. The photographs here reproduced, and others circulated during its delivery, are by my son, Mr. A. S. Hooppell, A.M.I.E.E., who journeyed from London for the purpose. 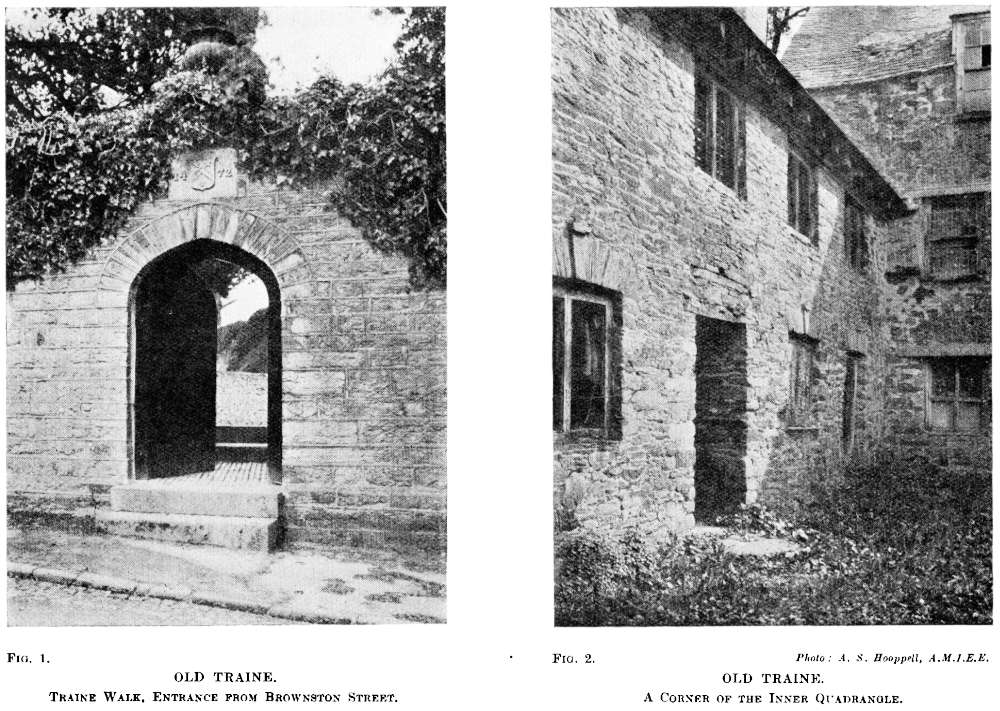 The date over the entrance is 1472, with the Arms of Swete. After a slight ascent and a somewhat sharp descent, the wide path of cobbled-flints leads to the spacious Courtyard of Old Traine, surrounded by objects of great and varied interest. On the immediate right is a large pond, fed by the spring which rises in the higher ground behind the old Manor House on the left. A circuitous path surrounding it leads to an ancient tree — the trysting-place of generations of past friendships, at the head of the scarp descending towards the hill beyond, now called Galpin Street. Looking back, on the right are the extensive buildings forming the Shippon, though — with its gateway and lofts — almost ecclesiastical in appearance. Immediately in front, leading up to the old House, are six steps of granite, hauled from Dartmoor in 1664, ample and rectangular in design; and above them, a massive Gateway Arch, beyond which stands the old Manor House, the Tudor doorway on the right, with its inner dog-gate, at once attracting attention. The most interesting buildings entered by this and the companion doorway on the left, surround an ancient quadrangle, where we may fancy ourselves taken back to the 15th century. The walls are 3 ft. thick, and the spacious rooms — lofty and wainscotted — rise around, one above another, two and even three stories.

It was here — 100 yds. east of the main Modbury-to-Dartmouth road — that the earliest history of Traine was made; and, viewed from the opposite hills on the South, it occupies a commanding position, with lovely prospect, of old-time splendour. The earliest records give it the title of De Arboribus; and later, Trewyn and Treyne. By Deed, May 10th, 1489, it belonged to John Scoos, who died August 5th, 1520, father of John Scoos of Milton near Thurleston, who was seised in fee of Brownston, which was theirs from 1435. In the Chancery Proceedings and those of the Star Chamber, Johane Scoos as widow of John Scoos of Upton in South Milton, who died without issue, “says she has divers Deeds concerning tenements called Brownston, Brownswell, Treyne, and six messuages in ye borough of Modbury”, now claimed by John Swete, as Plaintiff against her, because of his descent from William Scose and Isett his wife, who died about 1541. This was proved, with Agnes, widow of John Scose of Trewen (aged 70), as witness that their daughter Johane was married to John Swete of Upton in S. Mylton, from whom the Complainant, John Swete, was descended, and who now recovered Traine, Brownston, and Brownswell, as heir of John Scose, of Mylton who died about 1520.

The Will of this John Swete of Traine became the subject of a letter written by his eldest son John, who, having joined the Catholic clergy, left England, and is thought to be referred to by Fuller, on page 102 of his 17th Century Church History, as having taken part in a Conference between Dr. White and Dr. Featley on the one side, and Father Fisher and Father Swete on the other, which was held at Sir Hugh Linde’s on December 21st, 1622. That letter to his brother Adrian, who had entered Traine in 1613 as next heir, may be said to begin the most interesting part of our subject, as the period itself is also the most exciting and interesting in the History of England. 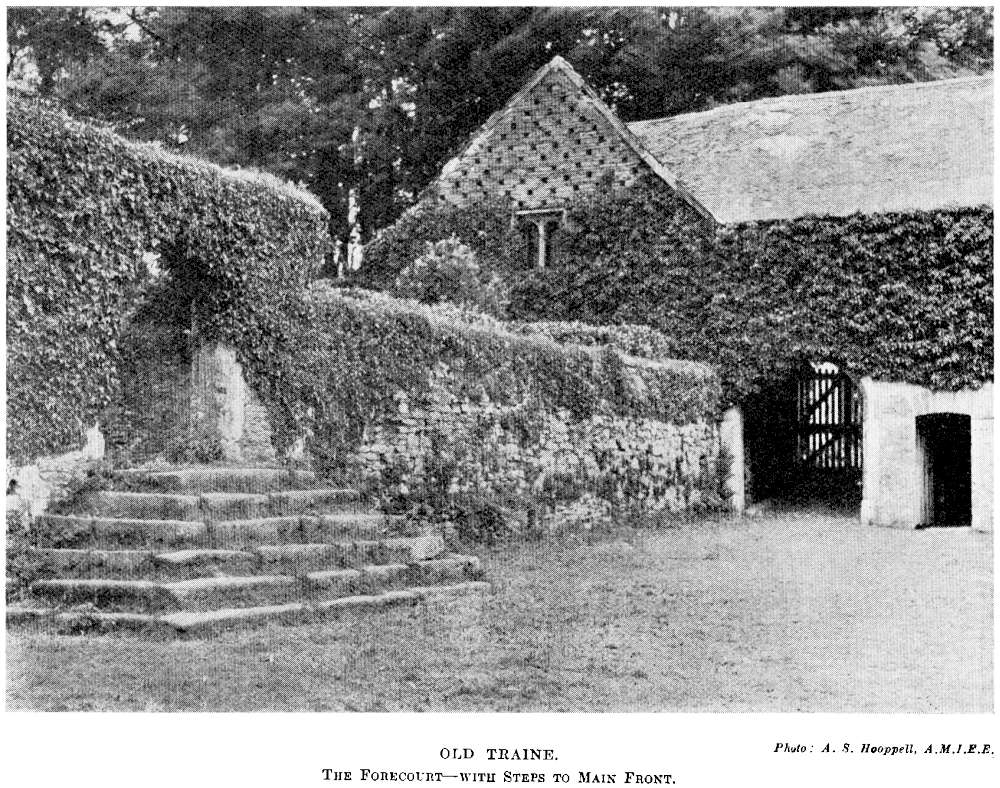 Adrian Swete died in 1647, having lived during the long struggle between King and Commons. He married Judith, one of the daughters of John Mayne, Esq., of Preston in Ermington, and of Wadland in Ugborough, and theirs was the largest family reared at Old Traine — 3 sons and 4 daughters, she dying January 23rd, 1658.

This Adrian — the first of four — paid King’s Taxes and the “Fifty Dole” upon the Manors of Traine, Preston in Ermington, Wadland in Ugborough, and the Tithings of Brownston and Worthele. 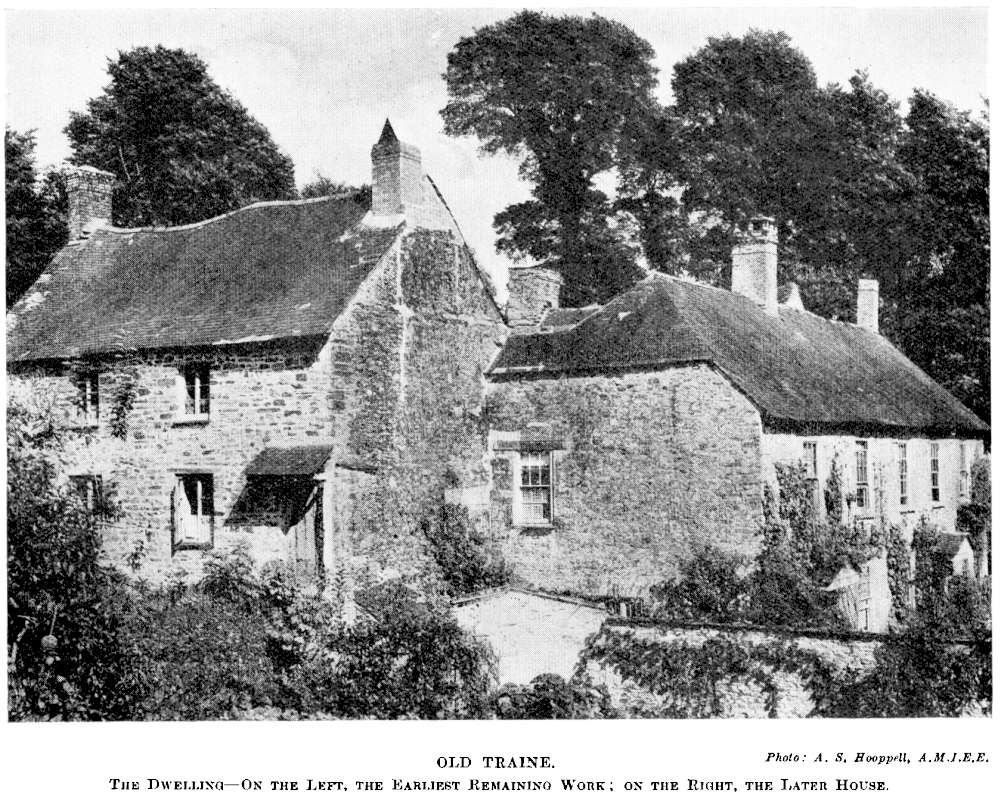 For the last twenty years of his life these valuable MSS. of Adrian Swete’s Journal give most interesting actual details of facts we have always read of in the general History of England; and as they show to what extent landed proprietors were compelled to supply King Charles I with the means to continue his struggle against the Parliament, they are here copied as written:—

“On June 16th, 1625, six soldiers were billetted upon me at Traine, for which I am to receive 4d. for every week-day, and 6d. for Sunday, abating on every soldier’s weekly Pay ½d. in the name of the 100th penny, said to be the Treasurer’s Fee. On January 4th, 1627, I delivered my writ of Infirmity to Thos. Willin, Baily of Ye Hundred of Ermington, and 3s. for the allowance of it.”

The next entry, on October 16th, 1630, refers to what are called in the History of England, Coronation Knighthoods:—

“I paid to Sir James Bagger, to the use of the King’s Majesty 30s. [that is about £25 at our present-day valuation] in discharge of my pretended contempts for not receiving the Order of Knighthood at His Highness’ Coronation [on February 2nd, 1626], for which I have an acquitance.”

Here we have a contemporary record of how Knighthood was brought so low in public estimation as to be referred to in one of the Ballads thus:—

“Knighthood in old time was accounted an honour,
Which the noblest did not disdain;
But now it is used in so base a manner,
That it’s no credit but rather a stain.”

The next date, December 25th, 1636, brings us to Modbury and Traine under another grievance, called in English History Ship-money.

This tax had been introduced in 1634, and imposed at sea-coast towns only. It was now extended to the whole kingdom, divided among the counties and then allocated upon the landowners and boroughs. So now, on December 25th, 1636, the record is:—

November 29th, 1642, paid a Constable of Modbury £5 [nearly £100 nowadays ] promised to be lent to ye Parliament towards the Soldiers’ pay (to keep the Cavaliers and new adherents in Cornwall from invading Devonshire); and other like charges for ye defence of the Country hereabouts against the Cavaliers of Cornwall.

December 4th, 1642, the King’s Pardon read in Modbury Church, to all who had taken part with ye Militia.

April 11th, 1643, paid ye Clerk of ye Peace in discharge of so much set upon me and exacted from me by him and certain other Commissioners to be lent, as they said, to ye Parliament upon the Propositions — the full sum of £140 [i.e. nearly £2000 now].

September 27th, 1643: I sent a man and horse furnished with a Carbian, Sword, Belt, Flaske & Touchbox, Saddle, Bridle, and a Pair of Boots, which cost 10s. 2d. in money, to Sir Thos. Hele, being thereunto required in His Majesty’s name, and (as he said) to be employed in His Majesty’s Service.

December 26th, 1643: Came Major Belford with three of his Servants, the Quarter-master Berry and two troopers, with nine horses, to my House at Trayne, to be quartered on me.

Memorandum that upon Friday about the 16th of October, 1644, as I take it, Captayne Winchely, by the command of Edward Seymour, Governor of Dartsmouthe, as he said, tooke me up at Modbury and sent me as Prisoner to the Marshalsey at Dartsmouthe, where I continued as prisoner five whole weekes; had my Sonne’s horse, which I rode upon thither, taken from me; had also £10 demanded of me for a Fine; the whole charge whereof, with the Marshall his Fees, ye expenses of the five Troopers who carried me to ye Marshalsey, mine own expenses & other like occasions, amounted in ye whole to £20, at the least. 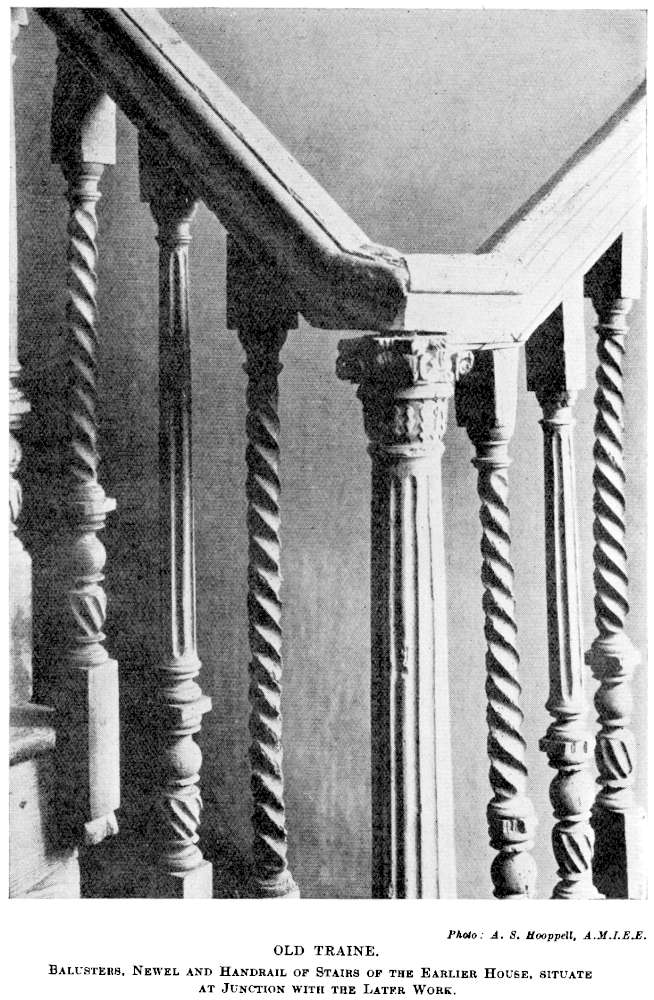 So drew to its close the first Adrian Swete’s life at Traine, after taking his part in the troubled national life which was, so soon after, to find relief from all sorts of exactions and pretences, under the Dictator whose rule was destined to give an indelible character to the County-life of Devon.

Next to Adrian I, came his two sons in turn — the first, Maine, who married, 1st, Judith Hele, daughter of Sir Thos. Hele; 2nd, Susannah Trevilian of Nettlecombe in Somerset. Of him may be noted a curious experience recorded by himself, under date, December 24th, 1659, thus:—

“My Cousin Servington Savery, of Shilston, and Robert Scobble, came into my Townparke meadow at Brownston, and turned out the water of my meadow, in the presence of Philip Champernowne, and told my servants: but within half an hour that he turned it out, I turned it in again with mine own hands, and told my foresaid servants of it.”

He was followed at Traine by his brother John, who, after studying at the University of Oxford, became Rector of St. Keverne, and now, with the title of Esquire, came to Traine as next heir. He died on July 5th, 1695, and his was the last funeral from Traine, in Modbury Church. His son, Adrian II, who married Honor Fownes, of White House in Ugborough, was Sheriff of Devon in 1725, and died 1733. The record states that at his funeral the Executor asked that it might be in Modbury Church, at 5 in the morning; and that the Vicar, Archdeacon Baker, refusing, it took place at Ermington, in the vault annexed to Preston — his grandmother’s old home there.

His brother, Maine II, being next heir, returned from an estate in Antigua (after having lived in London from 1688), and married, 1st, Grace Walrond (being her third husband); 2nd, Esther Prickman, of Falmouth, who survived him until 1781 (46 years).

Her Will bequeathed Traine to her relative, the Rev. John Tripe (who assumed the name Swete, and occurs in the D.N.B.), and to his heirs and assigns—a long line which brings us to Mr. John Andrews, to whom I wish again to express my indebtedness for access to the old documents, and for other kindnesses.