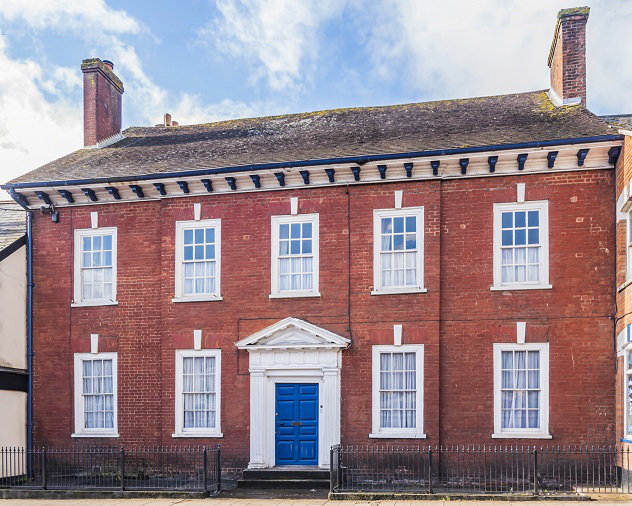 The title of this account of our house includes a quote from the Historic England listing1 that contains the phrase “very complete”. Anyone who knows Crediton will know that there are many 18th-century houses in the town, in particular along Union Terrace and Union Road. A few have retained some of their original layout and interiors: Powne’s House is probably one of the most complete.

Powne’s House occupies a prominent position on the Western end of the High Street although it is set back slightly from the road so it is only noticeable once you are almost outside it. Cobbles front the house and run around the side of the adjoining Victorian terrace to a rear courtyard. The Heritage Gateway site2 suggests that the house might pre-date the great Crediton fire of 1743, a view reflected in the Historic England listing but local records show a house at this site was destroyed by the fire so the closest we can say is mid-18th century (John Heal, pers. comm.).

The name Powne’s House is derived from a well-known surgeon, Dr Leslie Powne who occupied the house from 1901 to 1939 when he and a Henry Hugo ran a medical practice from this address. Prior to this the house was occupied by a series of eminent surgeons from the Hugo (1841) and then the Body (1871) families. There are no clear records pre-dating 1841 as the Street numbers appear to have changed and were not used consistently in previous records. It is interesting to note that the last Hugo, Harold Francis Lewis Hugo, was living at number 52 in 1939 along with his wife, daughter and two servants.

At some point the house was connected to the later building on its Western side and it has been suggested that the upper rooms were used as a school dormitory in Victorian times (pre 1841 presumably). The connection is still visible from the pattern of the varnish on the floorboards in one of the bedrooms (Picture 2, below).

During restoration works in 2020 we discovered, hidden in a wall space, pages from a notebook and other artefacts belonging to a Percy Trenavin Lunn, dated May 5th 1874. Research suggests that he was born in 1863 and admitted to the Royal College of Surgeons in 1881. Could Percy have been staying here and being tutored by the then resident Body family? The association of this house with the medical profession is clearly a strong one. 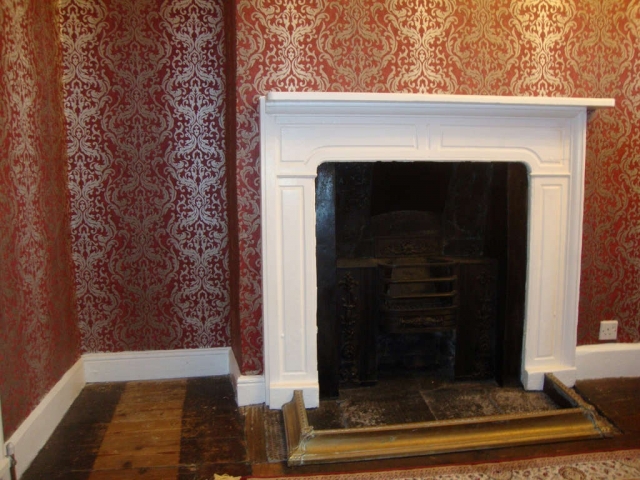 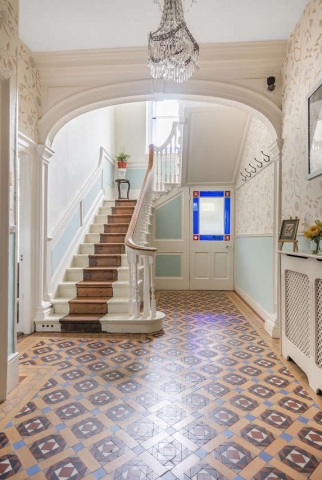 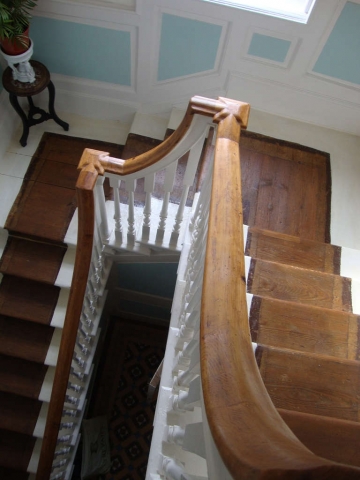 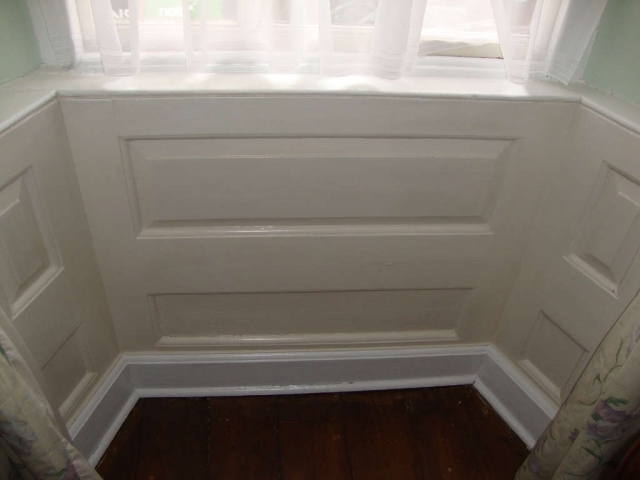 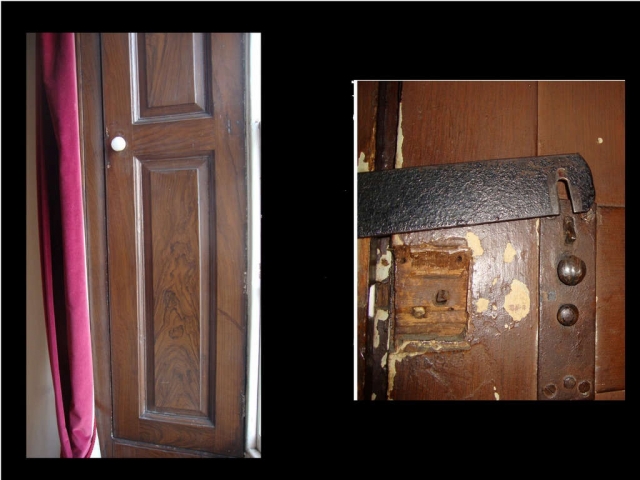 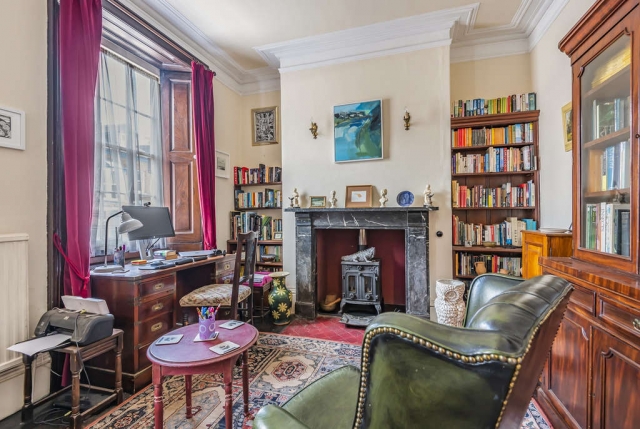 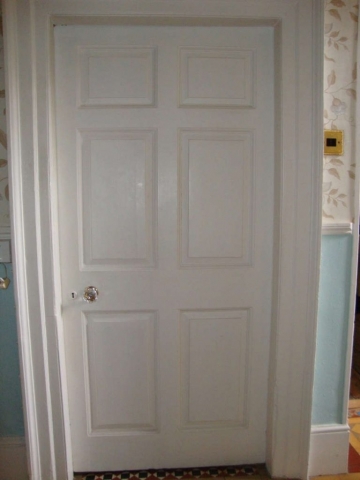 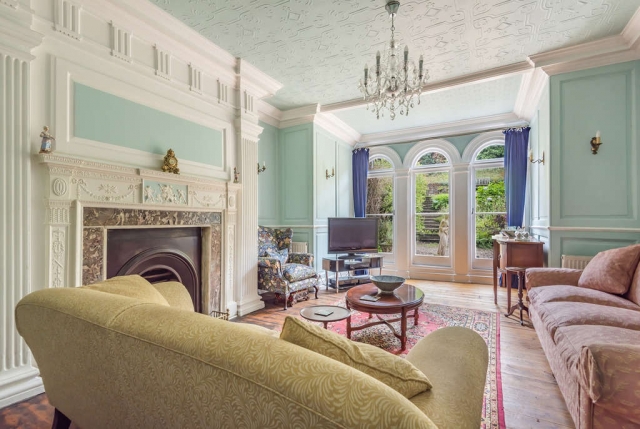 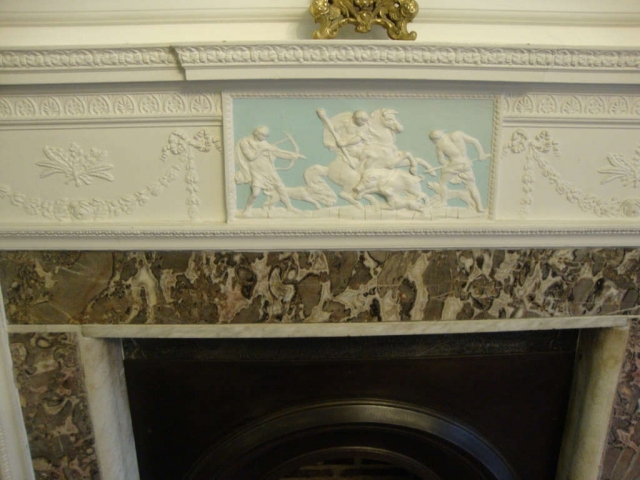 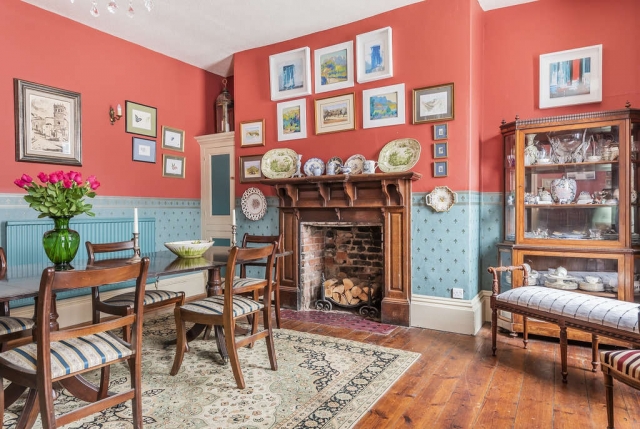 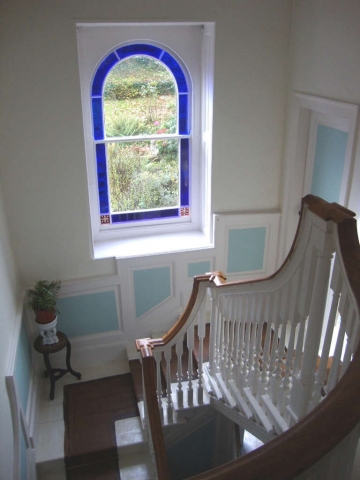 Tour of the house

It’s an easy house to admire from the moment you enter into the large, airy hallway featuring intact, early Victorian encaustic (or more correctly, inlaid) tiling along its length. The gracefully curved staircase retains its original rail, balustrades and newel posts with only some minor, early repairs. Having lifted the modern hardboard and carpet covering it is now possible see the rich patina of the treads and risers, painted white (probably in the 19th century) where the carpet runner would have finished. We were surprised to see that the deep treads are single pieces of thick, heavily grained wood (Picture 3, above).

Much of the fascination with our house is in the details only fully appreciated over time, such as the wonderfully tactile volute at the base of the stairs or the handrail caps at different junctions (Picture 4).

The woodwork throughout the house is an important survivor of nearly 300 years of wear and tear. This includes the panelling that faces the window bays in every room, including the kitchen (Picture 5).

The two window bays in the “study” also include working shutters. These are simple but highly effective sound and thermal insulators, secured by an iron bar and stud-latch system (Picture 6).

The architraves are also richly moulded throughout the house, framing the C18th six panel (downstairs) and two panel (upstairs) doors. The panels on these doors are called “fielded panels”, recessed panels with a wide flat surface surrounded by mouldings or beading, the design being repeated throughout the house (Picture 8).

The use of wood panels is taken further in the most elegant downstairs room, the “blue room”. Here the whole room is panelled and elaborately decorated, showcasing the fabulous fireplace and its surrounding fluted pilasters and intricate coving, almost certainly to a design by the Adams Brothers3. The over-mantel panel may well have once been painted, as seen in the much larger (slightly later, 1765) Sharpham House near Totnes. The fireplace itself contains a later Victorian insert. The original would have been square with a shallow “register-grate”4 (Pictures 9 and 10).

The heritage listing suggests this room was extended in Edwardian times but the extension is clearly marked on a map from 18905. The ornate coving and wooden panels have been carried into the new bay which ends in three elegant arched windows. The brick construction of this extension is clearly later than the main house, using sharply moulded, light red bricks with a deep frog (the middle indentation). These contrast with the thick, rough edged bricks, used in the main part of the house and which were probably sourced more locally.

If the “blue room” is the most elegant, perhaps the most impactful is the “dining room”. Sadly no longer with decorative coving and dado rail, the scale of the room is nevertheless impressive and one’s eyes are drawn to the large open fireplace with oak surround and mantel. Almost certainly there would have been a fully fitted register-grate here but the oak surround is difficult to date; perhaps Victorian? (Picture 11).

The Victorian taste for décor has clearly had an impact on Powne’s House. In addition to the floor tiles, the downstairs interior door to the rear hall includes glass inserts that mirror the blue and red glass on the stunning arched window on the landing. Other alterations will be seen as we progress through the house (Picture 12, above).

Visitors have asked about the blue painted panels. Historically, Georgian tastes for internal décor varied enormously. Some early 18th century houses have painted walls with bare, varnished/French-polished panels like those in our study6 (Picture 7). Others have elaborately painted scenes on the walls (eg Sharpham House), colourful wallpaper or just plain colours7. During our own restoration work we have repeatedly pealed back layers of paper and paint and found this blue colour painted directly onto lime plaster or plain wood with no evidence of prior varnish or other preparation. It is impossible to tell if the blue colour is Georgian, Victorian or later but this particular blue (close to “vert de mer”) was a popular colour in the mid to late 18th century8. The panels throughout are therefore painted using the colours we have found during their restoration. 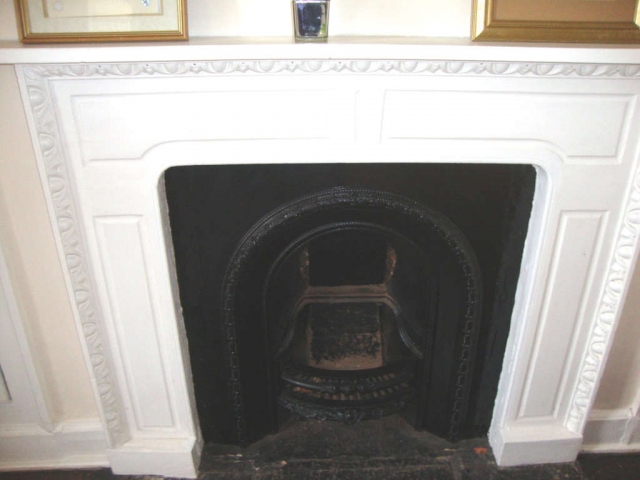 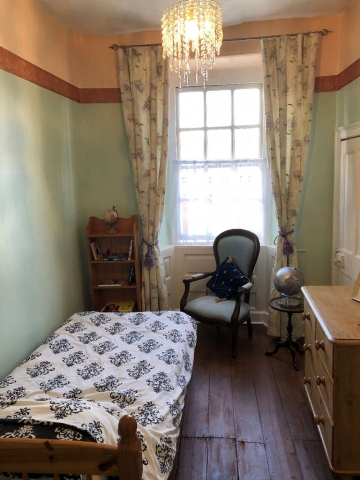 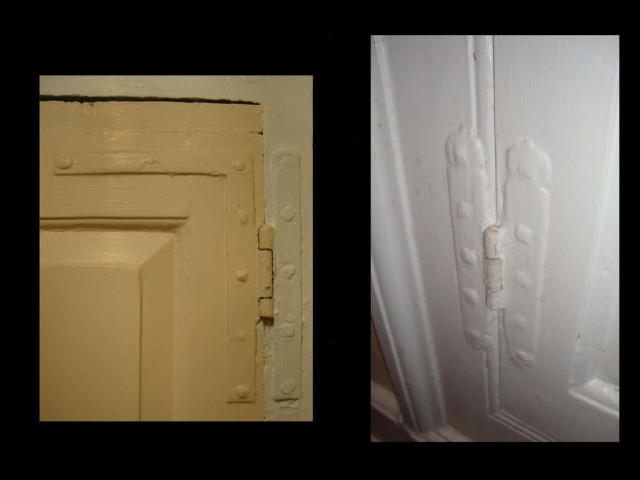 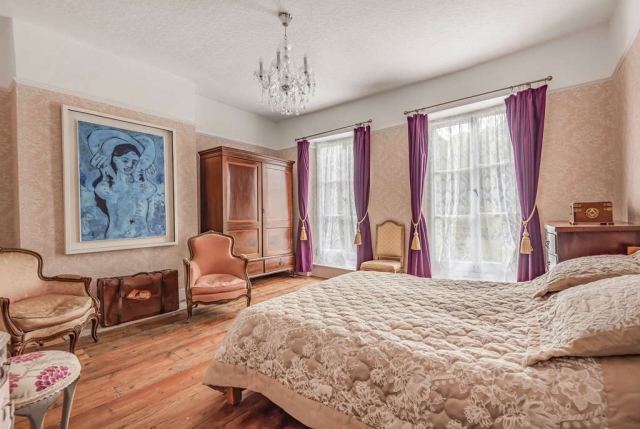 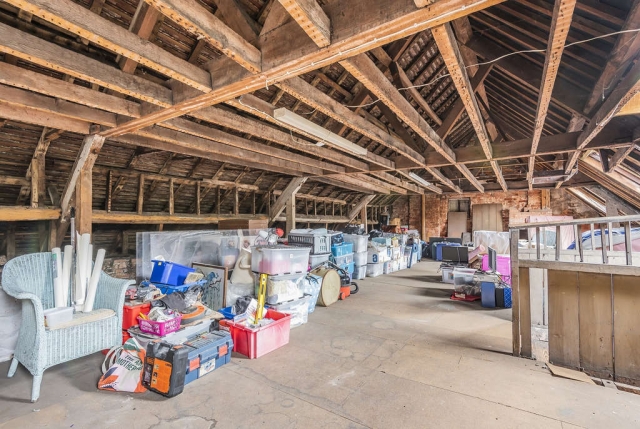 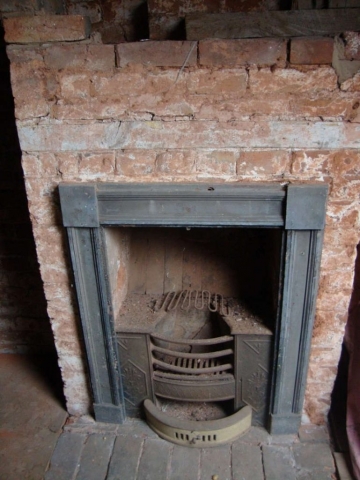 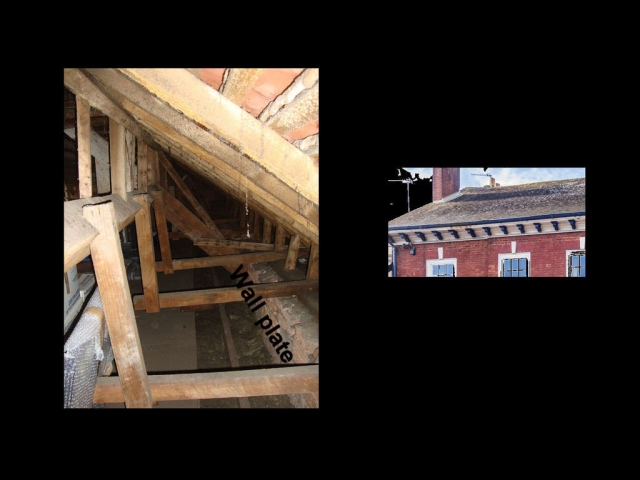 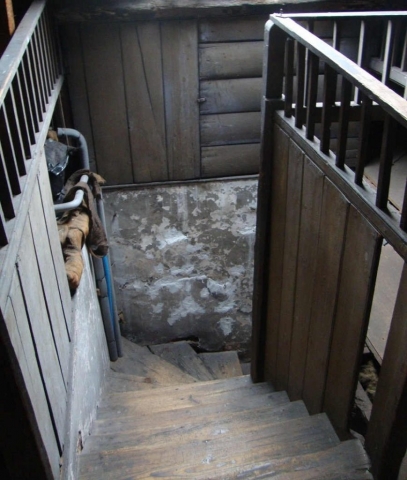 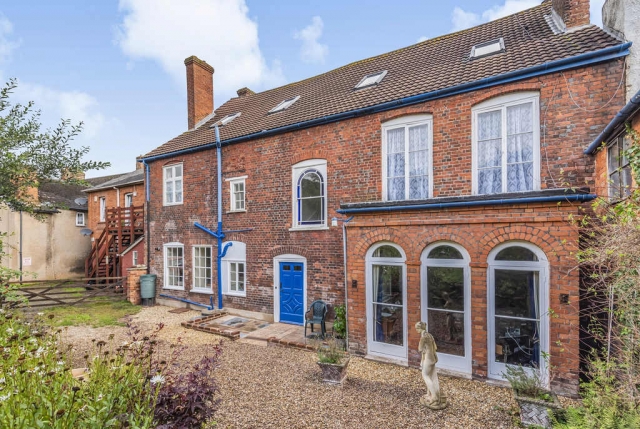 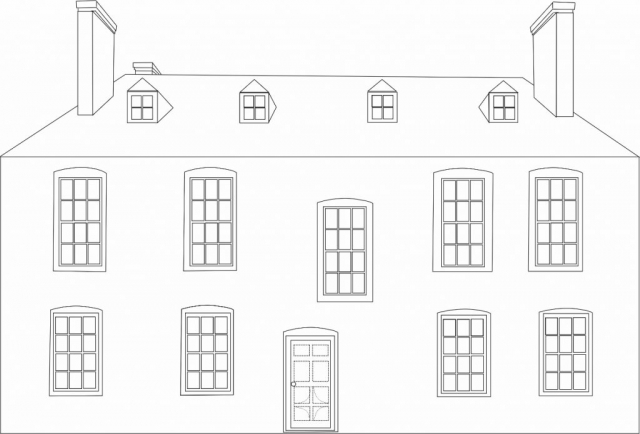 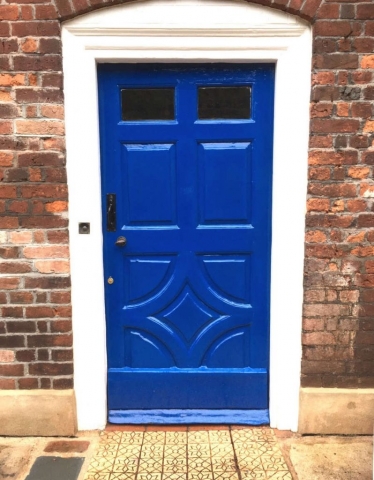 Moving onto the first floor, the main front bedroom on the Eastern side of the house retains 18th-century cupboards and fittings along with an original fireplace with a slightly later insert (Picture 13, above).

This room is connected to the next room, and that room to the next: it is debatable whether this is a later alteration or contemporary with its original layout: the doors and their cases are of a two-panel Georgian style9 (Picture 14).

The two interconnecting rooms have no fireplaces so would have been chilly in the Winter for whoever used them. The local conservation officer suggested these may have been dressing rooms but it does beg the question of why have separate ones in that case: his and hers?

The way the doors (including cupboard doors) throughout the house have been hung is interesting too. The 18th century hinges10 are robust cast iron straps, secured to the outer faces and clearly visible whereas later hinges are concealed, being secured to the door case and inner face of the door (Picture 15).

Above the “blue room” is what we use as a master bedroom but in Georgian times may have been an “upper salon” used to entertain guests. During repairs and decorating we revealed signs that this room might also have been panelled and have elaborately moulded coving like the room below it. Sadly all this, along with the fireplace have long since disappeared. The original windows have also been replaced with full length casements that allow exit onto the flat roof of the Victorian extension below. The catches on these windows match those seen on similar casements in Sharpham House and appear to be Victorian11 in design (Picture 16).

At the far Western end of the house is another fine room featuring an original register-grate fireplace and timber surround, slightly truncated where the corridor was cut into the adjacent house at some point (see Picture 2).

Back in the corridor, past the renovated bathroom there is a much wider two-panel door with just a rough latch to open it instead of the usual brass doorknobs seen on the other first-floor doors. This door leads up into the roof space which was home to the servants and is now a cavernous, carpenter’s delight (or nightmare, depending on your view!) (Picture 17).

Here there are the remains of the servants’ fireplaces and, while the ceilings and walls have long since disappeared, there are scraps of wallpaper and newspaper still glued to the plaster in places. It must have been a very different existence up here (Picture 18).

The roof space is full of joinery of all sorts including the curious extension of the eaves to front of the house that has required extra beams to push out beyond the wall-plate, reducing the slope of the roof but allowing a much grander façade (Picture 19).

The modern roof light windows would once have been dormas, as seen clearly in an image of “Old Crediton” taken in 193012.

Returning to the stairs, the heritage listing mentions the panelling here, and one’s attention is caught by a small door at the head of the half-landing. Behind this door is a cavity that faces onto a bricked-up window (Picture 20).

While this staircase is clearly the main access route for servants, it was also commonplace to give servants direct access to the kitchen away from the rest of the house. At this point imagination battles with conflicting evidence: was the hidden space with the bricked-up window once a second stairway into the kitchen? Therefore, was what is now a half-landing toilet, once a return on a concealed stairway? Where did it start in that case, in what is now the airing cupboard?

All we can say with some surety is that at some point this space was altered and a toilet added half-way up the main staircase, blocking off the space behind the panelling in the loft. The door from the toilet onto the main staircase is the same two-panel Georgian design, as is the tiny sash window that has replaced the larger one now bricked up, so the finger points to a substantial re-working of the rear of the house sometime soon after it was built (Picture 21).

From the view in Picture 21 it is clear that a number of original windows have been altered and an additional one cut-in to serve the kitchen (second from left on the groundfloor). To get an idea of its original plan I have created a line drawing (Picture 22).

Finally I must mention the fabulous backdoor. Speculation about its age and origin centres on the curved design on its lower half. Possibly 17th century, this may be a door or part of a door salvaged from another building, perhaps destroyed in the Great Fire. Without dismantling the whole door it is impossible to tell how much is earlier or contemporary to the house (Picture 23).

There are many other details that I don’t have space to talk about here and, sadly, my wife and I have decided to leave Powne’s House for pastures new and the house is currently on the market. We hope to find buyers who will love this beautiful and historic house as much as we have and cherish the incredible workmanship that has enabled the house to stand on this site for nearly 300 years in, largely, its original intended form.