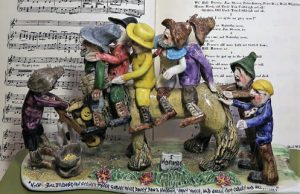 If any song is forever Devon, then it is Tom Pearse, or is it Uncle Tom Cobleigh? or Widdicombe Fair? Even if we can’t agree the title or the spelling, we all know of it – that ballad of a band of Devonians who set off to the Fair on a borrowed grey mare but didn’t return home, and of the skirlings and groans on the moor when the wind whistles cold. The ritualistic list of names, once mastered, might reach a deep seam of Devon culture, but there are many layers to this witty ditty. Its popularity is attributed to Sabine Baring-Gould. Song No. 16 of his Songs of the West, published in 1891, is Widdecombe Fair with “Bill Brewer, Jan Stewer, Peter Gurney, Peter Davy, Dan’l Whiddon, Harry Hawk and old Uncle Tom Cobbleigh (and all)” in the chorus. Baring-Gould had begun collecting the vanishing folk songs of the region direct from the mouths of the people (c. 1887) after a dinner where the local gentry could not recall all the words of this and other songs of their youth.

Baring-Gould says that the tune and words came to him from Mr Collier of Woodtown, Sampford Spiney and that the names in the chorus belong to Sticklepath – Tom Cobleigh was from Spreyton – but once he started, “other versions, slightly varying, then poured in”. His notes include The True Uncle Tom Cobbleigh from Harry Westaway of Belstone. This is a singers’ tune, with “Bill Brewer, Jan Stewer, Harry Hawkins, Joe Davey, Philly Wigpot, George Parsley, Dick Wills” occupying chorus places. This version was still out in the wild when Peter Kennedy captured Harry’s son singing it in 1951. It’s still the popular version locally.

However, it pays not to think too deeply about the detail – that Widecombe Fair only started in 1850, 55 years after the death of old Tom Cobleigh, or that versions of the song to other polysyllabic fairs were collected across Southern England, or about the European tradition of ghostly grey horses mediating passage of the dead between this world and the next. No, just enjoy this good old chorus song to be belted out whenever anyone asks – “Do you know any proper Devon songs?”