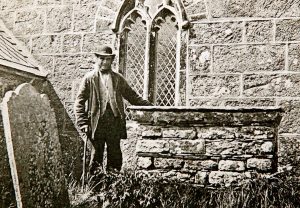 While researching the tale of the watchmaker George Routleigh for the previous issue of Dartmoor Magazine, an interesting postcard of his grave at Lydford came to light. The postcard shows an elderly man with a walking stick, his hand resting on the watchmaker’s tomb. The postcard is captioned ‘The Late Peter Hill, 47 years Clerk and Sexton, Lydford Church’. Peter’s own relatively plain gravestone, in the south-east part of the churchyard, records his long service and that he died in 1898, aged 69 years.1 A little digging reveals more of the life of a truly remarkable character.

Peter was born in Bridestowe to mother Elizabeth, and father Thomas, a miner. Baptised on 20th January 1828 at St Petroc’s church, Lydford, by 1841 Peter was working as an agricultural labourer in Bridestowe. Ten years later, at the age of 23, he was living with his parents in Lydford and is recorded in the 1851 census as a schoolmaster. In the same year he took on the offices of parish clerk and sexton, though not without a struggle. Reverend Sabine Baring-Gould of Lewtrenchard, and Reverend Richard Turner, sometime rector of Lydford, each report on a rather unseemly episode.2

According to Baring-Gould, the previous clerk ‘was addicted to lifting his elbow too freely, and came to church occasionally in a hilarious condition. The climax was reached at a funeral, when he tumbled into the grave before the coffin, and apostrophised the dead man as he scrambled out: “Beg parding, Ted; I bain’t minded to change places wi’ you just yet.”’3 As a result of his drunkenness, the old clerk was discharged from his duties and Peter appointed in his stead.

But, noted Reverend Turner, the older man refused to accept his dismissal, and when Peter stood in the clerk’s pew for the service the following Sunday, the old clerk took up a position in the next seat. The service began, with Peter, in stentorian tones, providing the responses. This proved too much for the previous incumbent, who, according to Peter, ‘climmed in auver the sate and tried to heave me out – and he tored all the buttons out of my best westcutt’.4 Peter stood firm, while his assailant was apprehended by the churchwarden, who was also the parish constable. Found guilty of brawling, the offender was sent to gaol for three months.

Thus began Peter’s long career as a parish officer – a career for which he seems to have been rather well-suited. In the late 1880s he is described as ‘that rara avis [rare bird] a really intelligent sexton’,5 and a ‘storehouse of anecdote and legend relating to the parish church and her priests’.6 Perhaps this was to be expected from someone who was also a schoolmaster, but Peter was possessed of another, more unusual, attribute, for he was, in the traditional sense, a charmer.

Peter ‘obtained a subsidiary revenue’ reported Baring-Gould, ‘by carrying children afflicted with “the thrush” up the tower, and holding them over the battlements at each pinnacle, whilst he recited the Lord’s Prayer.’7 Furthermore, Peter professed ‘to be able to staunch blood in men, women, children and animals.’ Suffering from profuse nose bleeds himself, Peter averred that he could stop these ‘by using as an incantation the sixth verse of the sixteenth chapter of Ezekiel’.8 He believed, as did others, that knowledge of this charm could only be passed from a man to a woman or a woman to a man.

The strength of Peter’s character is most fully revealed in his fierce loyalty to his church and family. Reverend Turner tells us that ‘once in his younger days there came to him the chance of a prosperous matrimonial alliance. It fell through, because as [Peter] said “her wanted me to give up the church and to turn out Willum”’.9

William Hill, a copper miner five years younger than his brother Peter, is recorded as blind in the census of 1871, having had an accident with ‘rock powder’. William had been a ‘hard drinker and noted pugilist’, but despite his sometimes difficult behaviour, Peter promised their mother on her death bed that he would never abandon his brother. The two are documented as unmarried and living together in 1881, when Peter is described as a ‘Marine Store Dealer’, an appellation for a trader in second-hand goods. Peter and William ‘travelled the countryside in a rickety cart drawn by a well-bred pony to gather rags and bones from thrifty housewives’.10

Peter ensured that William was engaged in his church work too. When a grave needed to be dug, Peter, who had long suffered from a leg injury, led the way into the churchyard, with William holding onto his brother’s coat. Peter marked out the grave space and removed the turf, while William ‘exulting in the opportunity of exercising his ancient skill and ‘Samsonic’ strength’ quickly finished the task.11

In the census of 1891, Peter is still living with William and is referred to simply as the parish clerk. His long service was recognised in a rhyme by Reverend Dr Bryant:

When I first came to Lydford Church
The Clerk was Peter Hill;
Now years are gone and past,
And Peter’s clerking still!12

In the late summer of 1898, Peter wrote to his old friend Reverend Turner, now at Bickleigh vicarage, near Roborough: ‘dear sir just few lines to leave you know that peter hill Have been lead up with very bad leg for The last four months he is going to have is Leg tacken of…peter an william hill give their kind love to mr turner and mrs turner’.13

Peter was taken to Tavistock Cottage Hospital where the operation was carried out. Sadly, he was not strong enough to withstand the shock – his condition gradually deteriorated and he died on 21st September. Reverend Turner wrote: ‘In his last days of weariness and weakness his old life came back to him. The blind brother, to whom he had devoted himself, was ever in his thoughts. The old men had been accustomed to sleep in the same bed… And still Peter thought his old companion was with him. More than once the silence of the…hospital ward was broken by Peter’s voice cheerily rousing his blind brother – “Come Billy, my dear, tis time for rise”’.14 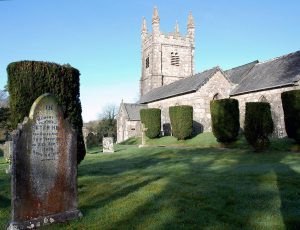 Peter’s funeral was attended by a large number of mourners. A local newspaper reported that ‘the Rector…spoke of the great loss which that church had suffered by the death of one who had done his duty faithfully and well, and said the last thing which they, as a congregation, could do to show their respect was to erect a monument fitting to one whose memory would remain behind for long years to come.’ 15

And so, through the kindness of friends, Peter’s gravestone was placed in the beautiful churchyard at Lydford where he had laboured as sexton for nearly half a century. There it still stands, honouring a ‘most worthy man’ of Dartmoor.16

Other information on the Hill family sourced at www.findmypast.co.uk.

With thanks to Sue Viccars, editor of Dartmoor Magazine for agreeing to the republication of this article.

Other writings by Dr Sue Andrew