On the south side of Walkhampton church a slate surmounting a chest tomb bears the following inscription:

Deposited Beneath ARE THE REMAINS OF MR WILLIAM SHILLIBEER who was Schoolmaster of this parish about 48 years: He married Mary, Daughter of the Revd AMOS CRYMES B.A. Vicar of Buckland monm by whom he had 10 children. 3 have survived him and 7 lie intered (sic) near this grave, who died young: As a Testimony of Respect, his Funeral was attended by upwards of 1500 persons all uninvited to pay their last affectionate Tribute to so much departed worth: Who living was beloved. In Death revered. He died the 4th of June 1827 aged 71 years. Also of Mrs Mary Shillibeer, Wife of the above, who died Octr 5th 1828 aged 69 years. 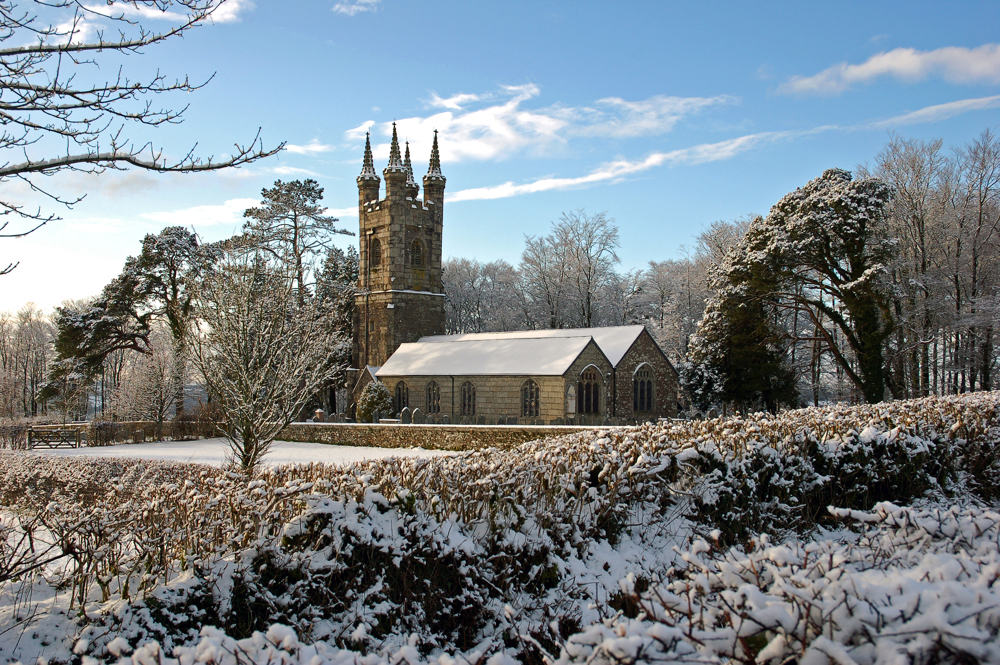 Walkhampton church. William Shillibeer’s slate-topped chest tomb can just be seen outside the south aisle, near the porch.

The inscription on William’s slate reflects his long service to the school in Walkhampton, founded by Lady Modyford as a charity school for twenty poor boys in 1719, yet he was not a typical country schoolmaster. By 1779 when William was appointed to the school by Lord of the Manor, James Modyford Heywood, it seems that he was already working as a carver of gravestones. At least eighteen stones in various churchyards are believed to have been carved by William between 1778 and 1795, with some of these signed.1

William Shillibeer’s signature on a gravestone dated 1789 in Walkhampton churchyard.

A stone in Walkhampton churchyard dated 1789 does not bear any decoration other than its finely cut text but is signed, most beautifully, by William Shillibeer. An earlier stone in memory of Reverend Samuel Forster, dated to 1775, is mounted on the north wall of the chancel in Sampford Spiney church, and bears a bold inscription: ‘Cut by William Shillibeer’.

One unsigned slate (a signature may be buried) of 1780, again in Walkhampton, which was probably cut by William, depicts ‘the finest carriage clock to be seen on a headstone anywhere in West Devon’.2 The text and images carved on the stone are surprisingly little weathered, given that the church is situated 215 metres (700 ft) above sea level.

Slate gravestone, believed to have been carved by William Shillibeer in 1780, Walkhampton churchyard.

William’s output as a stone carver can hardly be described as prolific, though undoubtedly some of his work has been lost, but his was a busy life. In 1785, five years after his marriage to Mary Crymes, the number of pupils at the school in Walkhampton doubled. Ten more boys and ten girls were added to the roll and Mary was appointed as the first schoolmistress. The boys were taught reading, writing and arithmetic, with the girls being instructed in reading, writing, sewing and knitting.3

It was when Maristow estate, which included much of the parish of Walkhampton, was sold in 1798 following the death of James Modyford Heywood that life was to become more complicated. In addition to his sculpting and teaching, William pursued interests as a land surveyor and the tensions between his role as schoolmaster and surveyor would eventually come to a head.

The new Lord of the Manor, Manasseh (Masseh) Lopes, was initially happy to exploit William Shillibeer’s skill in surveying and William was much occupied in making a survey of the Manor of Walkhampton, leaving the school in the care of an usher, with the occasional assistance of William’s brother and younger son. However, in December 1817 a petition was presented to the Court of Chancery by Sir Masseh Lopes, and Reverend Hunt, curate of Walkhampton.

The petition alleged that Sir Richard Hughes, vicar of the parish, ‘had not resided there for upwards of five years…and particularly that the present schoolmaster, Mr Shillibeer, had been permitted by the said Sir Richard Hughes, in defiance of the wishes of Sir Masseh Lopes, to continue in his office, he being very negligent and wholly unfit for his situation, independent of being constantly occupied in other business’.4

William defended himself vigorously, asserting that not only had he educated children under the terms of Lady Modyford’s Trust, but more than 300 others besides, ‘whose parents…had not sufficient interest to get them placed on the foundation’.5 He declared that, before Sir Masseh Lopes had come to Maristow, his business as a surveyor had not taken him away from his duties at the school. It was only when Sir Masseh employed him on the survey of the manor, that he had had to neglect the school, and he had forewarned Sir Masseh of this. After Sir Masseh admitted to the court that he had employed William in the survey and other business, the matter seems to have been resolved, with William agreeing that he was ready to devote himself entirely to the school if required.

Nonetheless around this time William was employed by Sir Thomas Tyrwhitt, friend of the Prince of Wales, to survey the line for the Plymouth and Dartmoor Railway, from Princetown to Crabtree, in the parish of Eggbuckland. The line was intended to carry lime and sea-sand up to the moor for the cultivation of the land, and granite, peat, and produce down towards the coast, in horse-drawn wagons. Other plans drawn by William Shillibeer survive in estate papers and in the Devon Heritage Centre. 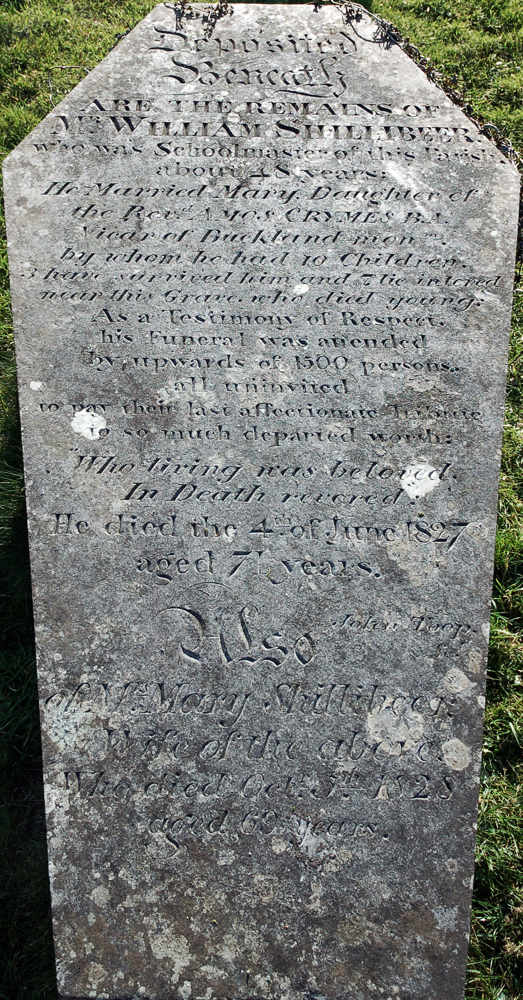 William and Mary Shillibeer’s gravestone records the tragic loss at an early age of seven of their ten children. Three sons survived to adulthood: Henry Blachford, baptised in 1783, John, baptised in 1786, and Amos Crymes, baptised in 1796.

Amos Crymes Shillibeer, the youngest surviving son, appears to have been closest to his father and mother as he is remembered in their wills, being bequeathed his father’s shares in the Plymouth and Dartmoor Railway, his surveying instruments, books and plans, and his mother’s shares in the Oxford Canal Navigation Company. Amos Crymes, a land surveyor like his father, conducted a survey for an early plan of Grimspound in 1829. Having lived in Taunton and Exeter, he returned to the moor and was buried in Walkhampton in 1876.

John was more adventurous, joining the Royal Marines, and serving as second-lieutenant in the warship HMS Prince, which played a minor role at the Battle of Trafalgar in 1805. Ten years later, John was a lieutenant in HMS Briton, the first warship to visit Pitcairn and the Marquesas islands. John published an account of his voyage – A Narrative of the Briton’s Voyage to Pitcairn’s Island – in which were published sixteen etchings by the author ‘from drawings done on the spot’. John’s etchings are particularly interesting as among them are depictions of the heavily-tattooed Patuki, a chief of the Marquesas islands, and the only known portrait of Thursday October Christian, son of the Bounty mutineer Fletcher Christian. The dedication in the front of the Narrative is signed John Shillibeer, Walkhampton, March 17, 1817.

John later went to Jesus College, Cambridge, became a priest and was headmaster of Oundle School in Northamptonshire and Rector of nearby Stoke Doyle, where he was buried in 1841. In his will John left money for a granite plaque in his memory to be fixed inside the church at Walkhampton where it may still be found.

The progress of Henry Blachford, the Shillibeer’s eldest surviving son, was a little more chequered. An auctioneer in Plymouth Dock, he is recorded as a bankrupt in 1809.6 Establishing himself as a land surveyor and estate agent in Taunton, Henry seems to have enjoyed some success and wrote a book on the ancient customs of the manor of Taunton Deane, published in 1821. But twenty years later, in the census of 1841, Henry is recorded in the Sheriff’s Ward in Exeter – the prison for debtors for the county of Devon. A contemporary description revealed that debtors were ‘too often crowded together in a miserable and filthy manner [and]…frequently driven to great distress, and, to the disgrace of humanity, unable to procure even the common necessaries of life’.7 Henry died in Brentford, Middlesex, in 1867.

William Shillibeer was a man of many talents: sculptor, schoolmaster, and surveyor. He was recognised in his lifetime by William Burt, who wrote notes for Carrington’s poem Dartmoor, and described Reverend J.H. Mason of Widecombe and William Shillibeer as ‘persons better acquainted with Dartmoor than, perhaps, any other men living’.8

Beneath his distinctive chest tomb at Walkhampton, William Shillibeer lies buried with his wife Mary, among the stones that he carved, and surrounded by the tors that he knew so well. Nearby are eight of his own children, and countless others whose lives he touched.

Other information sourced at www.findmypast.co.uk and through the General Register Office and Probate Office.

With thanks to Sue Viccars, editor of Dartmoor Magazine for agreeing to the republication of this article.

Other writings by Dr Sue Andrew