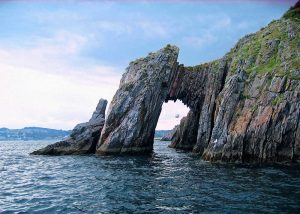 London Bridge in Torbay, formed of overturned limestones of the Daddyhole Limestone Formation

On 6 January 1912, Alfred Wegener presented his new ideas on the ‘origins of continents and oceans’ at the Senckenberg in Frankfurt-am-Main. A century later, his views on continental drift have been overtaken by our understanding of global Earth processes and plate tectonics, but there is no doubt that his views were the inspiration behind our modern science. We now accept that Torbay’s geological history is, therefore, a function of the migration of the area over the surface of the planet from 10°S of the Equator to the present position at 52°N. Superimposed on this northward migration are the global changes in climate over the last 400 million years of Earth history from ice-house to green-house and back to our present ice-house conditions.

The coral-rich limestones, red-coloured continental pebble beds and other geodiversity features of Torbay all document this fascinating history, leading to the eventual colonisation of the area by the early hominins. The geological history of Torbay often appears disjointed, with many gaps in the record. Geologists can, however, read these ‘gaps’ as well as the rock record, piecing together a story of shallow-water tropical seas, volcanic eruptions, uplift of mountains and their near-complete erosion, a warm continental desert interlude and the regular appearance and disappearance of the ‘Cornubian Island’. Throughout this history the climate, both locally and globally, has been in constant change and understanding this process is vital if we are to predict our future.

The full paper is in pdf format (29MB) and can be read or downloaded via this link.