The Walrond Screen in Seaton Church (1915)

In W. H. Hamilton Rogers’ Sepulchral Effigies in the Parish Churches of Devon, page 185, occurs an account of Walrond of Bovey, Seaton and Beer. In Seaton church, previous to its restoration in 1866, there was a north transept doubtless built by the Walronds of Bovey Beer (a junior branch of the Walronds of Bradfield) probably as a mortuary chantry, and the arms of the family appear on the corbel of the window. This chapel was originally enclosed by an oak screen of open tracery, subsequently portions of it were employed to give additional height to a large squire’s pew, and finally, on the complete restoration of the edifice (1866), they were removed, presumably for future preservation, to Bovey House where they still remain, but certainly deserve to be reinstated in their original position which it is to be hoped may be their ultimate fate. 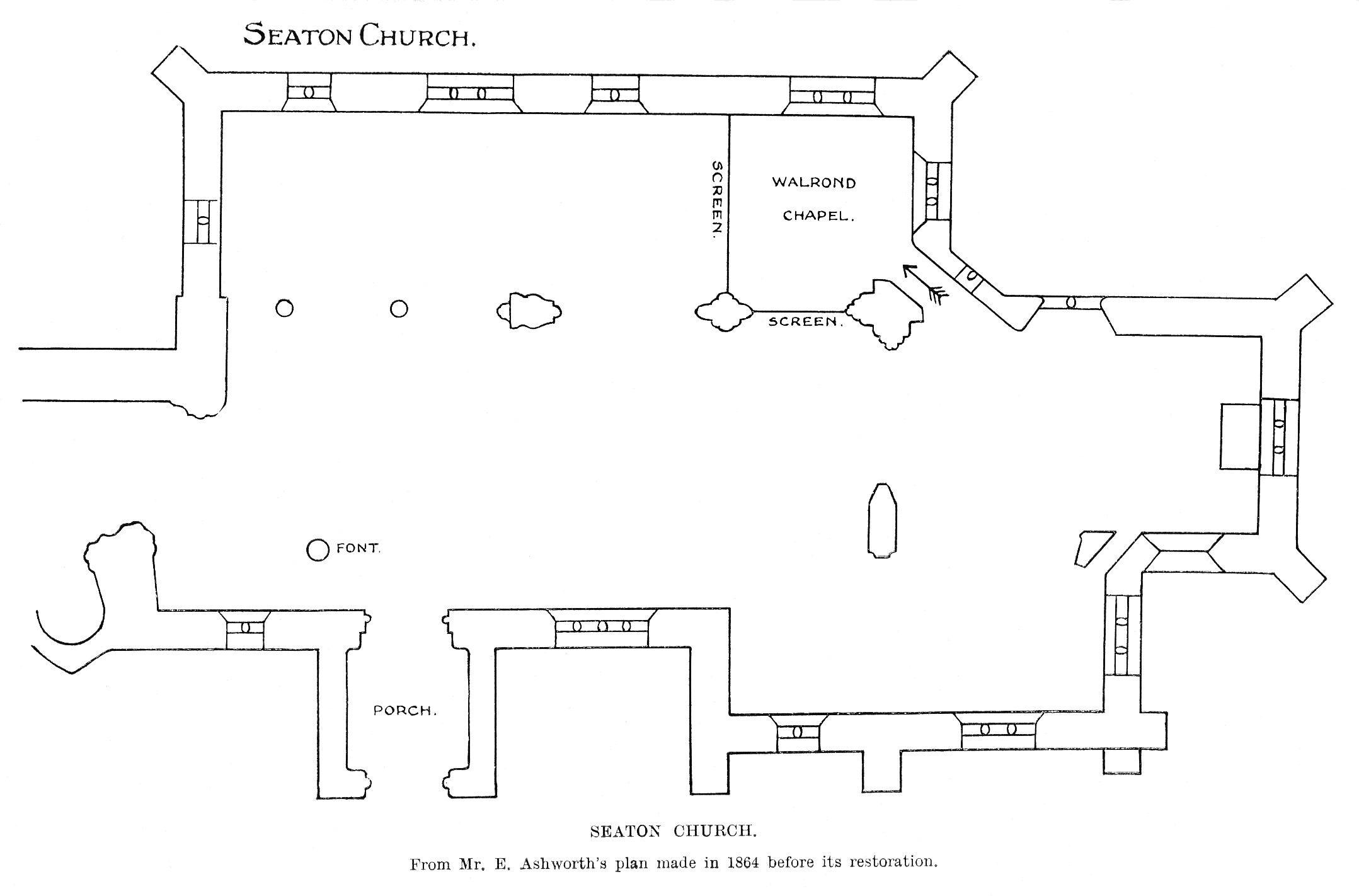 “The portions consist of open tracery, temp. Henry V Ill, and are ornamented with the single red and white rose, the large double rose, and a series of shields with armorial bearings carved in relief, and exhibiting the descent of Walrond of Bovey and some of the earlier alliances Of Walrond of Bradfield emblazoned in colours :- 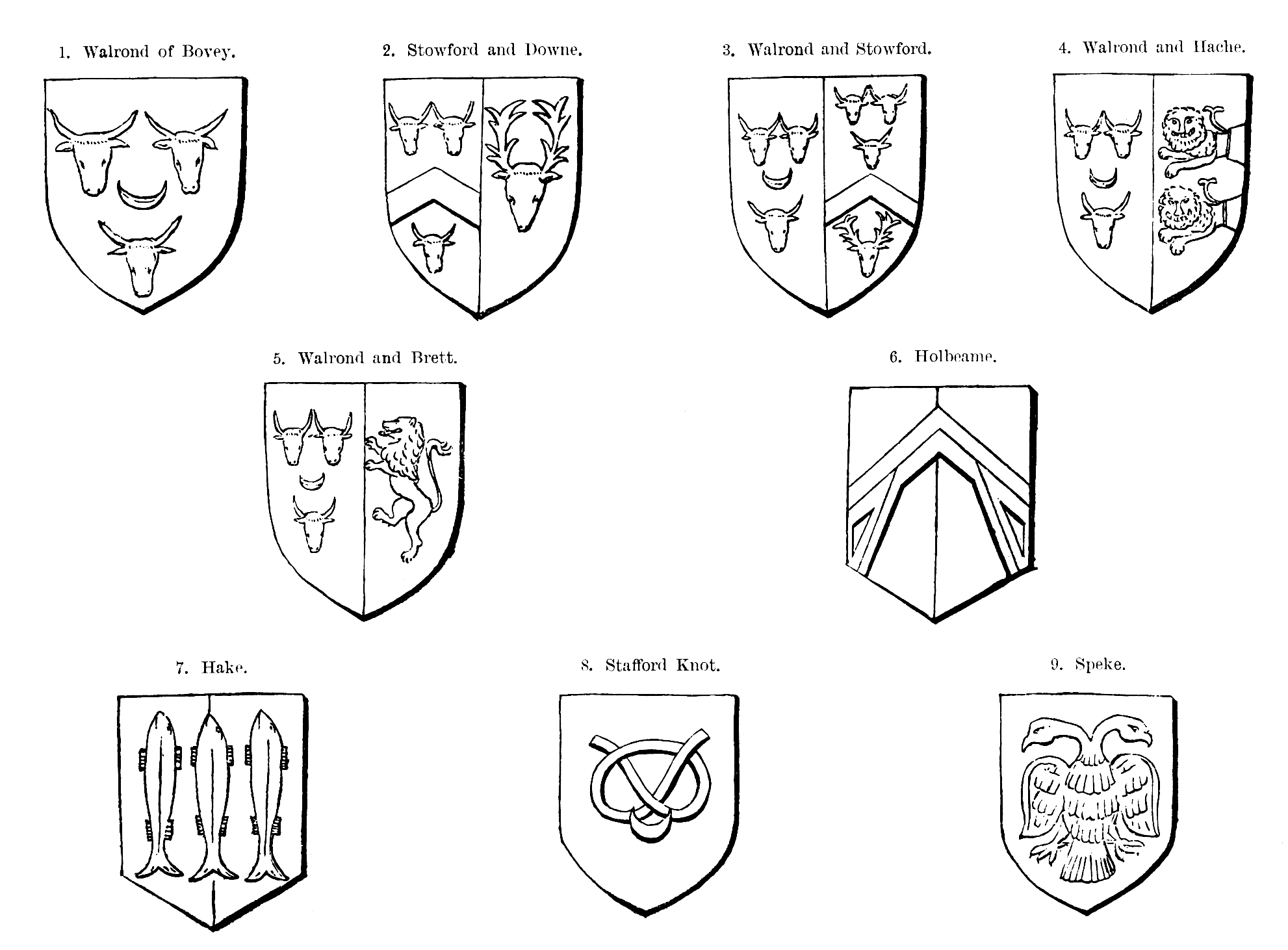 “The devices on these shields are carved in relief and the colours appear to have been subsequently added, and are erroneous in two or three instances.”

I am much indebted to Mr. A. J. P. Skinner, who has very kindly supplied me with the following pedigrees from Pole,(1) showing how the arms shown on the screen came to the Walronds by their marriages.

Mr. Skinner adds :-
“As Holbeame and Hach are both on the screen I take it that the screen was erected by the above Henry and John Walrond unless they were later additions. The three fish are Hake not Fishacre, the Downe Arms are Downe of East Downe.”

The canopies are six in number ; two have three coats of arms (facing), 1st, Walrond centre, Holbeame left, Hake right ; 2nd, Walrond centre, Speko left, Stafford Knot right ; this latter has in addition red and a white rose on each of the spandrels of the arch. These canopies are 3 ft. 6 in. wide, and the pair exactly fit the arch on the south side of the Walrond Chapel. The other four are smaller in size, being only 2 ft. 11 in. wide ; they have a central shield only and bear on them respectively : Stowford impaling Downe, Walrond impaling Stowford and Downe, Walrond impaling Hache, Walrond impaling Brett ; these canopies exactly fit the western arch of the Walrond Chapel. As all these canopies have mortice holes cut, into which the mullions of the screens were fitted, it is clear no entrance or doorway was made in the screens themselves, but that the entrance to the chapel or pew must have been from the chancel through the hagioscope, which is a Tudor arched passage way about 6 ft. 6 in. high by 3 ft. 6 in. wide, and open down to the floor level. 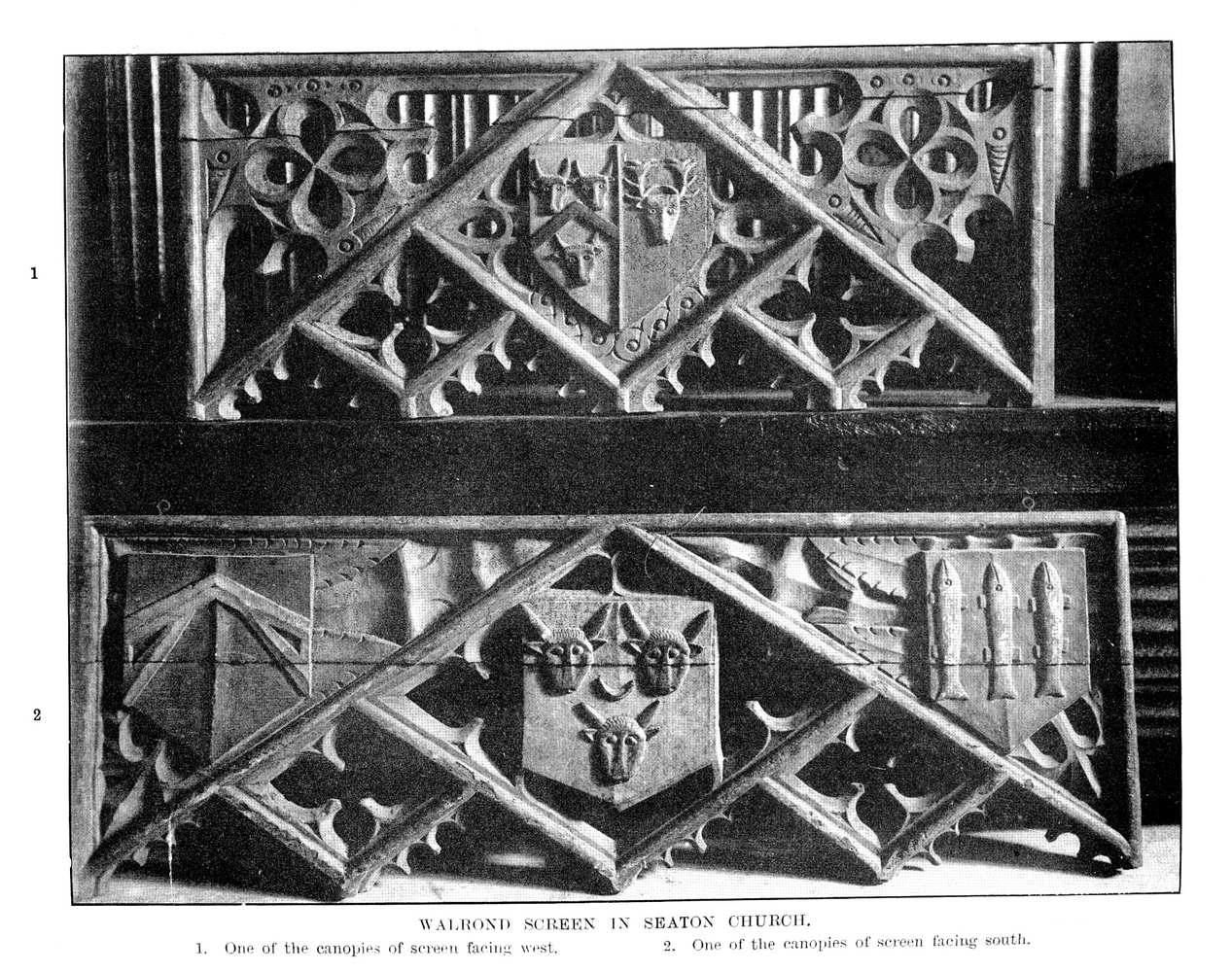 It is lighted by two rough lancet-headed windows on the north side, and is built outside the original church wall into what is now the vestry, but which originally was the churchyard. This passage served the double purpose of an entrance to the chapel and a hagioscope (see rough plan of church showing place of screen and entrance to chapel).

The carving of the screen is rather rough work of late design, and from the details used in the ornament one is inclined to accept Mr. Skinner’s view that it is work of the time of Elizabeth, and not, as Mr. Rogers states, that of Henry VIII. The screen appears to have been carved at one date and probably by the same hand; the ground was painted white, and the heraldic charges in their proper colours. Mr. Skinner thinks the screen was erected by Henry Walrond of Bradfield, buried at Uffculme 21 July, 1550, or John Walrond of Bovey, buried at Seaton 16 June, 1611.

This screen must have been somewhat similar to that of the Moores of Moorshayes in Cullompton church, which also bears the Walrond arms impaling Moore, but as the Seaton church arches are low (unlike Cullompton) the screen was much lower, and the heraldry carved on a smaller scale, being nearer the eye.

When I went to reside at Bovey House seven years ago I recollect Mr. Hamilton Rogers telling me about the screen and asking me to see if I could find any trace or fragments of it at Bovey; this I was never able to do. He told me that it was removed from the church to Bovey on 5 January, 1845, and stored there for safety. This will account for Mr. Ashworth, the architect, making no reference to it either in his manuscript notes on Seaton church, or his sketches and plans now hanging in the church, and made in 1804—5 before its restoration.

Soon after leaving Bovey last year (1914) I happened to be walking down Bond Street, and saw in an art dealer’s a canopy of a screen with the Walrond and other arms on it. . Finding on enquiry that he had several of these, I took a note of the arms and on my return home compared them with Rogers’ account, and discovered I had all but four shields. On my next visit to Town I saw the art dealer and enquired for the missing pieces ; he stated that there were two more, but one had been sold to a gentleman at Brighton, and so a visit had to be made there to obtain the necessary drawing and measurements. The other canopy was in the possession of the art dealer, but its shield had been carefully cut out and sold to a gentleman who claimed to bear the arms. He had recently had it erected in his house, some 1500 miles west of New York, on the mantel of an oak-panelled room, originally from an old Elizabethan house in Herefordshire. Fortunately the shield and arms can be replaced, as a sketch had been kept.

The canopies are now all in my possession except the one at Brighton, which will, I trust, before long join the rest, and, in the words of the late Mr. Hamilton Rogers, it is to be hoped that at some future date the screen may be re-erected in its original position.

(1) I desire to acknowledge the valuable architectural assistance I have received from Mr. S. Seymour Lucas.

I. Alice = John Walrond
dau. and h. of Bradfield.

John Walrond=Jone, dau. and h.
of Bradfield. of John de Stowford,
probably by his wife, dau. of Downe.