Torquay. Report from the Entomology Section

Insects, like the English Riviera Tourism Company, make good use of Torbay’s mild climate. Several species are at the northern extreme of their range in Europe. One notable animal has no business to be in this hemisphere at all, and would probably not survive more northerly winters.

A Bloxworth Snout, from The Moths of the British Isles, 1909

Best known, as usual, are the moths. The so-called macro-moths have splendid English names, and those of the rarer species often reflect the place where they were first recorded in Britain. Hence the spectacular Jersey Tiger, until recently restricted to South Devon though now spreading; and the Devonshire Wainscot, first recorded in Torquay in 1859 and now well established on the cliffs, as are the Beautiful Gothic and Barrett’s Marbled Coronet. The Bloxworth Snout (Bloxworth is in Dorset) was first found in Torquay in 1989 by the DA’s present moth recorders – the 11th British record – and is now breeding there. Amusingly the Paignton Snout, a very rare migrant, is named for one record in 1908, and has never been seen there since! The little, wasp-like Thrift Clearwing has a colony in Berry Head Quarry. The micro-moths, usually smaller and often devilish to identify, seldom have English names. Torbay has two extreme rarities, both clothes moth relatives (but innocent): Infurcitinea albicomella, of which Torbay has the only two British sites, and Ischnoscia borreonella, known only from Petit Tor, Berry Head and an area east of Portland.

Two butterflies, increasingly rare elsewhere, are to be found here. The Small Blue, Britain’s smallest butterfly, breeds in a disused limestone quarry feeding on Kidney Vetch, and the Brown Hairstreak, with its larvae on blackthorn, has a strong colony on Preston Down.

A small – introduced – ground beetle Trechus subnotatus was for a long time known only from a site next to Paignton Zoo, but is now spreading in Devon. A more spectacular introduction is the four-inch long Prickly Stick Insect, Acanthoxyla geisovii which came in from New Zealand on ornamental trees, probably in 1907, and is now frequent – though inconspicuous – in Torbay gardens. 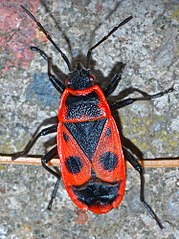 Really obscure, a rare bristletail, Trigoniophthalmus alternatus, winters in caves at Berry Head, at Paignton Zoo, Kents Cavern and Redgate Beach. Virtually all British records for this species are from South Devon, and Berry Head is the site where it was first reported. Finally, and hardest to reach, is the only British breeding colony of the Fire Bug, Pyrrhocoris apterus, a conspicuous red and black hemipteran – on the Ore Stone, a kilometre off Hope’s Nose. Or it was there when anyone last looked …

Images from Wikimedia Commons – click on them for details