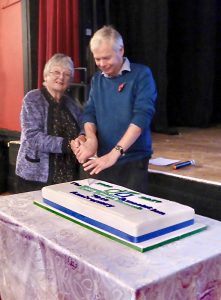 The East Devon Branch of The Devonshire Association was inaugurated seventy years ago on 4th November 1949 when twenty members met at Church House, Sidmouth. Formed to serve the surrounding towns and villages of East Devon, it soon gained a reputation for welcoming guests and members from much further afield. The Branch flourished and by the end of 1973 had a membership of 301, with a further 48 on a waiting list. Five years later meetings began to be held at the Arts Centre, Sidmouth, and in 2009 moved to our present venue – The Manor Pavilion, Sidmouth. Membership currently stands at around 180, with no waiting list!

The Branch is run by a committee, which meets twice a year to arrange a programme of six talks and two social events. Speakers are chosen who are experts in their field, and a high standard of lecture and presentation is aimed for, and usually achieved. Until quite recently some lectures did not have accompanying illustrations, but in this digital age audiences expect a PowerPoint presentation and a clear sound system. With this in mind the Branch recently purchased a projector, laptop and sound system, which has not only improved the quality of our meetings, but has also resulted in larger audiences. In the 2018–19 season attendance at our monthly meetings averaged 86, with the largest audience being 151 for a talk on Norman Lockyer.

Field trips have been important social occasions in the history of the Branch. In the 1960s up to eight visits were on the annual programme, and participating members were divided into two groups, the blues and the reds, with events being run twice. By the 1980s three annual visits became the norm and it was expected that they should all end with a WI tea. This continued until 2017 when it was decided to run just one field trip, usually in July. This year a barbecue replaced the WI tea!

A popular social event first took place in 1984 when the Branch celebrated its thirty-fifth year with a luncheon at the Royal Glen Hotel, Sidmouth. Lunches continued as part of the social calendar until 2006 when it was decided to introduce a Social Meeting in September, where members and their guests could meet the DA’s President in a more informal way. After ten years of get-togethers at Sidmouth Rugby Club, the lunch was reinstated and this year we joined the Exeter Branch at their annual lunch. This joint venture means that our President does not have to give the same address twice!

The East Devon Branch has always reached out to support the DA as a whole, providing officers for the old Council, and financial help and stewards for Bowhill. In more recent times it has contributed lectures to the programmes of the 150th anniversary of the Association and the Devon Newfoundland Story. It hosted one of Todd Gray’s talks on The Distinctiveness of Devon, and some members walked part of the way with him on his walk from Lyme Bay to Hartland. This year, for the first time, we took part in the Sidmouth Science Festival with our October lecture about climate change given by Dame Julia Slingo.

Looking to the future we plan to continue to build on the successes of the last seventy years, but need new committee members with fresh ideas and computer skills to help us. Approximately half of the large audiences at our lecture meetings are non-members, so efforts must be made to encourage them to join the DA with all that it has to offer.

On 8th November 2019 ninety members, guests and visitors met to celebrate the 70th anniversary of the Branch with a lecture, cake and bubbly. Our speaker was Andrew Cooper, DA President 2013-14 and renowned broadcaster, writer and international wildlife photographer. His beautifully illustrated lecture, “Dartmoor, a Celebration of its People, Places and Wildlife” was accompanied by interesting facts and amusing anecdotes and left us wanting more. At the party afterwards the bubbly flowed and there was plenty of cake for all. How different from the meeting in 1949. Our founding members would have been intrigued by the technology, and, as rationing was still in place, would have been amazed by the cake! My thanks go to all who contributed to the success of this happy occasion.