At our Branch Annual General Meeting in February, Rod Wallace retired from his position as Branch Treasurer, a role he has filled with distinction, and Trevor Hitchcock also retired from the committee after many years of much appreciated service. The committee and members were delighted to welcome Michael Waterson as our new Treasurer.

After the AGM, a member of our Branch, Martin Horrell gave a talk entitled ‘Mediaeval Rood Screens; their rise and fall’, a subject he has researched widely in England and France. The talk covered early church history and the origins and purpose of rood screens in church architecture. It was illustrated with exquisite photographs of roods and decorative panels still to be found in remote areas of England and Wales as well as in the better known larger churches, many of which the speaker has visited and recorded. Panels depicting Christ and the Saints have been lovingly restored and identified in recent years, many having suffered desecration at the hands of religious reformers and some having escaped attention by reason of their location, but now showing age and neglect. Martin has devoted much time and energy in recording these examples of mediaeval craftsmanship and his lecture was a delight!

For our last talk of the winter season in March, the scheduled speaker was unfortunately indisposed but at very short notice, Mandy Kingdom from Exeter University stepped in splendidly and delivered a very well-received paper ‘Discovering the people from the past – Life and death in Mediaeval Exeter’. Mandy spoke enthusiastically about her doctoral research project curating and researching a collection of bones largely uncovered as a result of enemy action during the Second World War in and around Cathedral Green Exeter. From her osteological researches, our speaker was able to give us a fascinating overview of the health, social standing and well-being of people from Exeter in the Middle Ages.

On a gloriously sunny day in May, our Chairman Hazel Harland and a number of our Branch members joined the President Dr Todd Gray on the Seaton to Sidmouth leg of his lecture/hiking tour across the county. The President, despite having just completed one of the more challenging sections of his expedition, gave a lively evening talk in the informal setting of the Cellar Bar at Kennaway House, Sidmouth, which he entitled ‘The Distinctiveness of Devon’. He delighted his audience detailing the various collective nicknames that villages in Devon once had. A Dicky Bird, a Monkey, a Cheese Eater and a Horniwink were a few of the more puzzling names and some were distinctly unflattering such as Sheep Stealers. Some were related to a location or principal occupation and others had a historical explanation but all kept the audience interested and entertained as Todd once again displayed his unrivalled and encyclopaedic knowledge of the county. 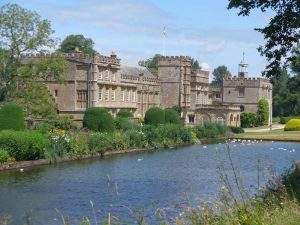 In July, members crossed the county boundary into Dorset for our Branch summer visit to Forde Abbey. We were treated to a private tour of this former Cistercian monastery led by an extremely knowledgeable guide. She explained about the founding of the Priory in the 12th century and its subsequent history as a monastic community until the Reformation. The various owners thereafter up to the present day were detailed to us, and members were fascinated to learn that the philosopher Jeremy Bentham had been a tenant in the early 19th century. 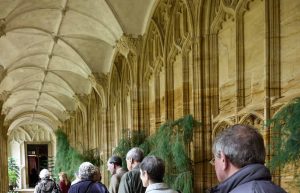 The monastic parts of the Abbey, especially the Great Hall and remaining part of the cloisters, proved to be of particular interest as well as the State Rooms. Fine weather enabled the group to enjoy the Grade II listed gardens and, of course, the splendid Centenary Fountain.

In September, as a prelude to our winter season of talks, the Association President David Fursdon will be our guest at the Members’ Lunch to be held, by popular request, at the Belmont Hotel in Sidmouth. The President has kindly agreed to give a short talk ‘Changing Patterns of Agriculture in Devon and where we go next’.