A talk: “Snakes and Ladders; the interlinked lives of two Victorian artists” to be given by Jenny Pery. 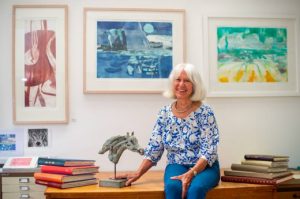 Jenny Pery is an artist, printmaker and art historian. She is a leading figure in the artistic world of Devon – a member inter alia of the South West Academy and of the Devon Artists Network which organises the annual Devon Open Studios events. She is the first to be awarded their new Heather Jansch award.

Jenny has had many solo exhibitions and has authored many excellent books on painters, including three on Alan Cotton. A DA member since 2013, she has contributed several papers on Devon artists to the Transactions.

In this talk Jenny will explore the work and personal interrelationships of two Plymouth-born artists, the talented, crusading but ultimately tragic Benjamin Robert Haydon and his former pupil, the immensely influential Sir Charles Lock Eastlake PRA.