Branch AGM followed at 2:30 pm by an illustrated talk “The Great Bindon Landslide; new mapping and modelling that may explain how it happened” given by Richard Edmonds*. 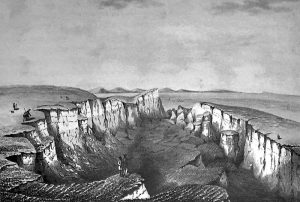 The Bindon Landslide of 1839 which created Goat Island and the Chasm, is one of the most famous in the world and yet there is still no agreement on how it may have formed. Modern surveying data from the Plymouth Coastal Observatory has enabled a highly detailed map to be made, both onshore and offshore, and for the first time it has been possible to model what may be going on in high resolution. This work will not be able to come up with ‘the answer’ but it has provided many insights into this complex landslide (two landslides in fact) and offers at least one possible explanation of what may be going on.