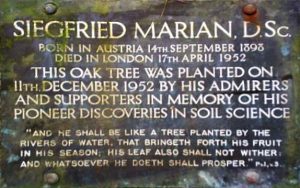 AGM followed by a presentation given by Tim Harrod entitled “Dr Siegfried Marian: The Enigma behind Fingle’s memorial plaque. Mad, bad or before his time?”

Dr Tim Harrod, who spent his working lifetime as a soil surveyor specialising in the Southwest of England, was made aware of this plaque near Fingle Bridge around 2005. Despite what it says on the plaque, Dr Marian had no publications in soil science’s journals and was unknown to any contemporary soil scientists. However, by asking questions in local pubs and among former forestry workers, also by scouring archives, his intriguing story emerged. Yet we still don’t have all the answers to the question posed in this talk’s title.

Two or three hundred yards north of Fingle Bridge along the lane there is a plaque to a Dr Siegfried Marian saying “This oak tree was planted on 11th December 1952 by his admirers and supporters in memory of his pioneer discoveries in soil science”. Having spent his working life in soil surveying but never having heard of this person, Tim Harrod set out to discover who this Dr Marian was. It was not easy!

Tim eventually found out that Dr Marian was involved in the important charcoal burning industry that took place on Dartmoor during the Second World War.

Originally from Austria where he obtained a chemistry degree from Vienna University and the equivalent of a PhD researching into ammonium chloride (smelling salts), Dr Marian fled to the UK as a Jewish refugee when the Nazis annexed Austria in 1938. Initially he was interned but when government sources realised his usefulness, he was sent to the Teign Valley to develop the charcoal business there. Some remains of the kilns that were used are still visible.

After the war cheaper charcoal was imported and the demand for local charcoal disappeared. So Dr Marian then transferred his talents to developing peat and forest litter products and in 1949 began publishing the “Soil Magazine”, copies of which can be found in the British Library. The magazine was published in Exeter and ran from 1949 to 1955, though Dr Marian died in London in April 1952.

Dr Marian made many claims about his ideas and products made from charcoal. He offered forty different products including composts, manure, medicines, polishes, fuel for Aga’s and canine deodorant! His ideas are contrary to mainstream science though he still has some supporters. Charcoal is an absorber so what it does to soil nutrients Dr Marian does not explain and there is no experimental evidence to support any of his claims. In an article in “The People” newspaper in 1949 the reporter claimed that the soil enhancer (fertilizer) was useless and expensive and one of Dr Marian’s medicines was over 99% water!

Clearly Dr Siegfried Marian was an energetic, able man whose charisma charmed many people. He was also antagonistic and scientifically misguided. And however unfortunate, he seems to be generally forgotten nowadays, apart from the plaque near Fingle Bridge.