Lee Bray is Cornish by birth, growing up in the St. Austell area and spending considerable time, including undertaking the Ten Tors expedition, hiking and camping on and developing a deep appreciation for Dartmoor. 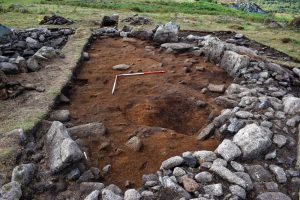 He is currently an archaeologist for Dartmoor National Park but started his career as a geologist gaining a BSc from Kingston University in 1988 and a MSc in Mineral Exploration from the Royal School of Mines, Imperial College. His geological work then took him into the oil industry working firstly as an on-site geologist and then as a specialist analysing sub-surface pressure regimes within oil and gas reservoirs.

However, in 1999 he switched careers and moved back to the South West to undertake a BA in Archaeology at Exeter University. He graduated in 2002 and then launched into a PhD researching Roman iron working on Exmoor which he completed in 2006.

Since then, Lee has held a variety of archaeological positions including as a project officer in commercial archaeology, working on sites ahead of development all over the South West and working for Exmoor National Park, especially in the area of mire restoration. He has been an archaeologist for Dartmoor since 2015 undertaking a variety of work ranging from giving advice on planning matters to running community excavations.

Photo © Dr. Lee Bray
The round house at Holwell Tor under excavation this September.