A talk by Brian Lownds-Pateman about Babbacombe Pottery, his family business. It was started by his grandfather in 1921 who provided a printing and photography service before he began making red pottery jars filled with ‘Devon Violets’ perfume which became his best seller.

Devonian Brian Lownds-Pateman gave an illustrated and interesting talk on his family business, Babbacombe Pottery. He brought samples for members to see and he is proud that all his merchandise is made in Devon.

Devon was famous for its violets and bunches of them were sent up to London once the railway had arrived here and Dawlish was called the “Violet Station”. The pottery developed a perfume called “Devon Violets” before the last World War and it evolved with the pottery, the perfume being sold in pottery vessels. However, since the 1950s glass bottles have been used. Unfortunately there are not enough violets in Devon now to make the perfume and synthetics have to be used in its production. A variety of flowers are now contained in the perfume “Floral Charm”, which has its biggest sale in the USA. 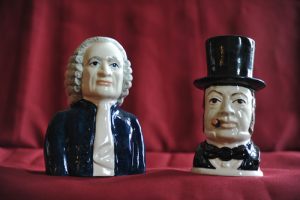 William Cookworthy and I. K. Brunel, made by Babbacombe Pottery in 2021

William Cookworthy of Devon was the first person to make fine china from ball clay but he sold out to Josiah Wedgwood – and “the rest they say is history!”

Brian is the fourth owner of the business and after he joined his father, as the English tourists now went abroad for their holidays in the 1970s, he started attending trade shows in Blackpool and Torquay. Since then he has developed a significant trade with the USA.

Today’s Babbacombe pottery includes ball clay from Bovey Tracey. Items are made by the slip casting process in which a thin clay mix is poured into absorbent moulds and when a skin has formed the remainder is tipped out and recycled. The hollow ornament is removed from the mould and then ‘fettled’ and ‘sponged’ to remove the sharp edges and to smooth it out. All these skilled activities are manual and not mechanical and we were shown a series of photos illustrating the processes. The goods are then fired in the kiln at 1066 degrees. When they come out, the products are very porous which makes them ideal for hand painting. Unfortunately hand painting is very expensive and is unlikely to continue for much longer as people are unwilling to pay the higher price for hand painted goods.

One of their products is a cat string holder, made famous by Dot Cotton of EastEnders fame! Pomanders were made for Boots, at one time 100,000 were being sold every year and Brian’s father filled them by hand with pot pourri. In 2022 Brian plans to make a “Platinum Queen” for Elizabeth II’s jubilee. He also makes honey pots for Quince Honey Farm in Devon and cat ornaments for Exeter Cathedral.

One of the best selling lines is pie funnels – there are collectors in the USA which make it a strong market and Brian is now making pie funnels based on politicians! In the 1970s Brian won an award for exporting.

In 1970 Brian’s father died and the original company went into liquidation. Brian began a new company with only 2 or 3 members of staff and he often makes his own deliveries to ensure the safe arrival of his products. However, he does not think he will be in business for much longer as his costs are escalating – his electricity has gone up from 15p per unit to 25p per unit. Whilst markets in the USA, Canada and Australia are still strong, the British market is in decline. Small retailers and producers are particularly badly hit. An era may be coming to an end.