“A WILD AND WONDROUS PLACE”: Dartmoor in art from the 18th to 21st Century
An illustrated talk by Peter F. Mason 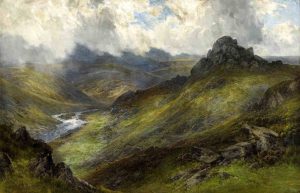 Dartmoor has inspired generations of artists. This talk will explore the way Dartmoor has been portrayed from the time when it was described as a ‘dreary mountainous tract’ through its place in the ‘Picturesque’ movement to the contemporary artists that are using it as their inspiration today.

Among the artists that brought about the transformation in peoples’ perception of Dartmoor are J.M.W. Turner, Thomas Rowlandson and Samuel Palmer. The coming of the railways brought greater numbers of tourists to the moor and locally based artists such as William and F.J. Widgery catered for this market and made Dartmoor enormously popular. Artists’ interpretations of Dartmoor on posters and postcards contributed to the tourist trade. In the twentieth century W.R. Sickert, Cecil Hunt and Edward Burra drew inspiration from the moor, and today artists such as Gary Fabian Miller and Michael Honnor are interpreting it in their own way.

Peter F. Mason has carried out the research and is co-curating the major exhibition, “Dartmoor: A Wild and Wondrous Region” which is being shown at the Royal Albert Memorial Museum in Exeter from 22nd December, 2017 to 31st March, 2018.

This is a joint meeting with the Devon History Society.