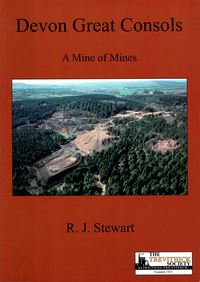 A talk about Devon Great Consols Mine, near Tavistock, to be given by the noted mining historian Rick Stewart.

Once the most productive copper and arsenic mine in the world, in its short lifetime of under 60 years from 1844 Devon Great Consols produced over 730 thousand tons of copper ore and more than 71 thousand tons of refined arsenic.

During the 20th century the mine was reworked on a smaller scale, also producing tungsten and tin ores; the last reworking of the dumps taking place in the 1970s.

£2 for DA members, £4 for non-members. Pay in cash at the door, or in advance by credit or debit card via TicketSource here (for which a small booking fee, minimum 30p, applies).

The site of the Great Consols Mine can be found on the A390 near Tavistock. Between 1844 and 1902 this was the largest copper mine in the world. Arsenic was mined there too.

The first documentary evidence of mining in the area comes from the 1530s at the time of the Dissolution of the Monasteries. The paperwork associated with the demise of the Abbey of Tavistock in 1538/9 mentions tin working but it probably started in the twelfth or thirteenth centuries. This was likely to have been streaming in the three river valleys that ran through the land there.

The lode of ore in the area of the mine differed from a few inches to 30 or 40 feet and different minerals were found at different depths. The top surface became weathered and some minerals, for example tin and copper, were leached out. The land was rich in tin and it was also above the water table so it could be worked to about a depth of 10 feet using open cast mining. The tools the miners used were basic – iron shovels and picks so that when they came across harder ground, they had difficulty.

The water table was about 100 feet below the surface. Copper had been leached from the top and deposited there. Copper, sulphur and iron were also in existence below the water table. Before the eighteenth century the complex copper ore found here was not valued as there were difficulties in smelting it but by the beginning of that century those difficulties had been overcome and copper mining began in earnest.

The land around Tavistock was owned by the Dukes of Bedford. The Sixth Duke was against any mining as he used the land for pheasant shooting but he died in the 1830s and his successor, Francis, needed money. Therefore Duke Francis leased the mining rights and the Great Consols Mine came into being.

The lease was granted to a group of London men which included the Thomas brothers and members of the Morris family (William Morris’ father). Josiah Hitchins, a local mineworker who knew the area was also involved. A share capital of £1,024 was raised but there was then a call on shareholders for money for equipment. Mining began on 10th August 1844. Digging a further 20 feet in a pre-existing tin mine shaft, they came across the largest copper vein ever found in the South West of England. Money flooded in and by 1850 it was the richest mine in the world.

The main lode was two and a half miles long and 30 to 40 feet across. The mine was so big it was divided into five smaller mines, all connected underground. Most of these workings are now flooded and will never be seen again.

Timber supports had to be imported through Morwellham which developed as a port to support the mines. Coal was imported from South Wales to fuel the steam pumps but this was expensive so in the late 1840s the decision was made to move to water power.

The Great Leat was built to provide the water to power the many waterwheels needed. There were 33 waterwheels at the mines but the cost of water power was significantly less than coal. Very little evidence of these waterwheels exists today.

The 1850s saw a steep rise in the price of copper but the original 21 year lease was coming to its end. In 1857 a new lease was granted, but at much more favourable terms for the Duke of Bedford. Nevertheless, the mine grew. A railway was opened in 1858 to bring the ore from the mines to the port and Morwellham was expanded. The new lease extended the area that could be worked and there was a mining boom in the Tamar Valley with an influx of miners from Cornwall. The population density rose dramatically but this brought outbreaks of diseases such as cholera and to ease the overcrowding the Duke of Bedford built 400 miners’ cottages in 1856.

However, by the mid-1860s copper was coming from Australia, the USA and Chile and the price fell. Many small mines failed and the Great Consols Mine only survived by diversifying into arsenic. Arsenic comes with copper, is safe to mine and came as a by-product of the copper mine. Whilst arsenic was the saviour of the mine, the owners really wanted a tin mine. In Cornwall tin had been found under the copper and it was hoped this would be the same around Tavistock.

In 1872 the mine was reconstituted into a Limited Company and recapitalised to look for tin. For nearly seven years and digging down a further 260 fathoms, they looked for tin but found nothing. By now there was a new generation of mine managers that tried to cut costs by reducing wages so the 1870s and 1880s were beset by strikes. In 1889 they decided to sink another shaft but again found nothing and in 1900 the USA started producing arsenic themselves. It was the end of the mine and in September 1902 the lease was given up.

The Dukes of Bedford, who had expanded Tavistock on the money they had made from the mine, now employed the ex-miners in non-jobs just to give them some work to do. The Duke felt it was his moral duty to help the local population.

During World War I arsenic was needed for munitions and in 1917 work started again in the mine but it was short lived and by 1930 the mine had closed again. There was some work during the 1970s and 1980s to try and find tin again as the price had risen but nothing came of any of the attempts. By 1986 all work had stopped, never to be resumed again.