A Zoom talk by Duncan Hawley. 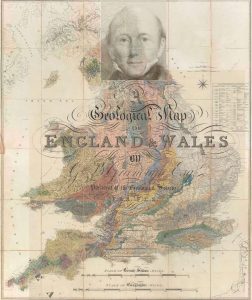 George Bellas Greenough was one of the twelve founding members of the Geological Society of London in 1807, and was thereafter impresario of the early Geological Society, and of its 1820 Geological Map of England and Wales. That map, and Greenough, has often been referred to as ‘rival’ to William Smith, but the reality is more nuanced. This talk will offer a biographical sketch of Greenough, his background and life, how he developed an interest in geology, his role in the ‘heroic age’ of geology and geological cartography, and in particular, will shed light on the production, distribution and influence of the geological map that bears his name.

Duncan Hawley completed his first degree (in geology) at UCL and post-graduate study at Aberystwyth and Oxford. He has enjoyed a varied career in education, teaching geography and geology in both state and independent schools, at a field centre in the Forest of Dean and at university in Swansea. He has a general interest in the history of geology and a particular interest in the development of early geological maps. Duncan was first exposed to the ‘heroic age’ of geology at school, then UCL where he was president of the student Greenough Club in his final year, and since then been interested in G.B. Greenough. Duncan is the current chairperson of the History of Geology Group (https://historyofgeologygroup.co.uk/).

To join this meeting please contact the Organiser (details below). You will in due course be sent instructions on how to log in etc. You will be able to log in a few minutes before the start of the lecture.

If you would like to make a donation to the work of the DA please click the yellow button below. All donations are handled via PayPal. Credit cards and debit cards are accepted even if you don’t have a PayPal account.