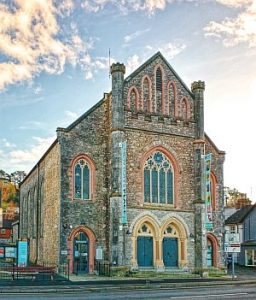 Felicity Cole, the curator of Newton Abbot’s museum, now at Newton’s Place, will take us on a virtual guided tour of the new town museum that opened last year.

Felicity writes: “I joined the museum in 1989 to set up a new museum for the town situated in Devon Square. I previously had worked in The British Museum and The Museum of London before moving to Devon with my young family.

“To create a museum for the community near the town centre has been a dream for many years, which, thanks to the National Heritage Lottery Fund and many other sponsors, has come true. We opened (despite the pandemic) for the first time in October 2020 with positive feedback, and we very much look forward to opening to the public again soon.”

Report on the event

From a Bronze Age spearhead and Iron Age delicate figurines, Felicity and Charlotte took members through a history of Newton Abbot

Without losing its magnificence and historical interest, the former St Leonard’s Church has been transformed into a modern and light building that enables the artefacts to be displayed to their advantage. Many of the displays are interactive and there are two automata – one a medieval market and the other a representation of John Lethbridge’s diving bell going down into the sea. Hanging above it, hanging from the ceiling is a replica of the diving bell.

Coins from Henry VIII’s reign can be viewed through a magnifying glass to appreciate the design; everywhere visitors are encouraged to touch and participate. Digital maps of Newton Abbot from various years are available on touch screens and many photographs are also available in this way. Children (and adults!) can decorate a vase among the cabinets displaying Aller Vale pottery.

An unusual exhibit is a photo of a small girl sitting on a swing. It is not the picture that is unusual but the “ropes” on the swing – they are made from the little girl’s hair when she had her very long locks cut into a bob. She lived on East Street, near the rope works, and the men from there transformed her hair into rope!

The Railway played an important part in the history of Newton Abbot and has an area devoted to it. Visitors can change the signals, ring bells and, sitting at the Station Master’s desk, use his telephone! The ill-fated Brunel’s atmospheric railway was explained and there is a small piece of it in the museum.

In what was the chancel of the church, there is a community area where locally made articles are displayed and these can, and will be, changed fairly regularly. Where the altar was, now given pride of place is the Sandford Orleigh overmantel. Created by George Templer from panels dating from 1522-25, the overmantel has been repaired and restored thanks to a Heritage Lottery grant. The 16 panels are made from Baltic oak and were carved originally, it is believed, by a Frenchman living in Devon at the time. The many layers of varnish had to be removed before repairs could begin – the layers were removed by using cotton buds!

A further piece of restoration work worthy of note is the chancel ceiling. Originally painted by Vernon Benbow in 1881 – we know as he signed one of the beams – the conservators have cleaned and restored it to its original beauty. Currently there are efforts to find a way for visitors to view the ceiling without hurting their neck!

There is a section devoted to the two World Wars. An old video shows Dr Hurst who worked at Seale Hayne Hospital during the First World War carrying out pioneering work helping soldiers who were suffering from shell-shock. He was the first doctor to help the ordinary soldier and not the officers, who had their own hospital in Scotland.

The costume area of the museum has a home-made Victorian wedding dress as well as a Victorian christening gown. An empty perfume bottle on the dressing table is marked ‘Bradley Woods “bouquet” Perfume’. This perfume was made by local man, Mr Bibbings, from wild flowers he found in the woods.

No report can fully cover or give justice to the talk and virtual tour of the museum – readers will have to visit themselves when the museum is open again to the public. It really is a gem!