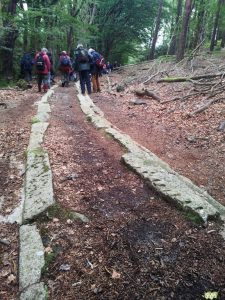 A guided downhill walk along Templer’s Granite Tramway from Haytor through Yarner Wood to Lowerdown (near Bovey Tracey). During the three mile walk, interesting features such as the sidings, the milestones, passing places, names carved on the tracks, and an unexpected sharp turn will be pointed out.

This event was originally planned for last year to celebrate the 200th anniversary of the opening of the tramway on 16 September 1820.

Meet at 2 pm. at the Haytor car-parks. Note that although the path is downhill all the way after the initial pull up to the quarry, it is rocky and muddy in places so please wear stout footwear and carry a stick or a pole if that is what you are used to. The walk will be followed by a cream tea at Lowerdown.

This event is now fully booked.

Photo: Walking the Granite Tramway in 2012