A talk given by Dr Jill Cobley.

Presented by the Devon & Cornwall Record Society in conjunction with the DA’s History Section. 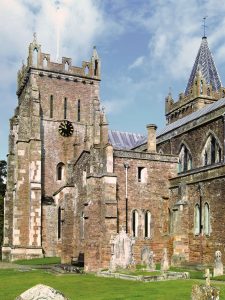 In the mid nineteenth century the Devon antiquarian James Davidson visited all of Devon’s churches and made detailed notes about their buildings, fabrics and fittings. His notes are an eyewitness account of the state of these parish churches at the time before changes in liturgy and fashion in the later Victorian period brought about irreplaceable change. Davidson’s descriptions highlight what has been lost from the archaeological record and allow us to make comparisons with the churches today. Five volumes of Davidson’s handwritten notes are housed in the Devon Heritage Centre.

Dr Jill Cobley has recently edited James Davidson’s East Devon Church Notes for the DCRS and her talk will introduce James Davidson, and his archaeological investigations. Dr Cobley will also describe Davidson’s Church Notes and will give examples of churches where fabric and fittings have been moved or destroyed.

James Davidson was a remarkable but little-known antiquarian. Between 1826 and 1844 he visited 499 churches in Devon making a unique record of Devon’s churches at that time. All his notes follow the same format and were written in the field on bluish paper. He does not mention building materials or the dedication or the exterior of the church unless it was damaged.

Davidson was born in London to a stationer and his wife in 1793. His father was also Deputy Lieutenant at the Tower of London and left his son a fortune which enabled him to buy the Secktor estate near Axminster. Davidson was married with five children and took an active part in Axminster affairs.

Apart from his five volumes of church notes, Davidson also wrote about archaeology, heraldry and other topics. In archaeology he was well ahead of his time, setting out what should be done and his plan of Mulbury Hillfort shows the scale of the site.

His recording of Devon churches came at a time of economic and social change and his detailed notes enable us to understand the extent of the changes that have taken place since then.

Dr Cobley visited 110 of the churches in East Devon visited by Davidson. Of these, five had been built in Davidson’s lifetime, two remain unaltered, 44 had been rebuilt, 59 had been restored and seven had been totally rebuilt since Davidson had visited them. She followed Davidson’s way of recording and checked what changes had occurred and what had been lost over time.

In the Middle Ages wall paintings educated parishioners but they were whitewashed over during the Reformation as they were regarded as “popish”. Some were, however, later restored. Davidson documented five churches with wall paintings but all are now lost.

These separated the chancel from the nave and were decorated by the local population which led to competition between villages! Many of these screens were removed when there was a move towards a more open church so that the congregation could see the altar.

These were originally made of stone but were later replaced by wooden tables. Some altars were moved from the chancel into the nave when there was this move towards an open church and some were then surrounded by wooden rails.

After the Reformation, pulpits became central in the church. Branscombe has the only triple pulpit left in East Devon.

There were box pews and family owned pews but these went out of fashion in Victorian times as it was believed that seats in church should be free. Davidson noted which type of pews were in each church and wrote about “modern” furniture.

The increase in population in the nineteenth century meant that there was a need for more seats and so many churches built galleries which were often used by servants or poor children. Since Davidson’s time 30 galleries have been removed.

Traditionally these were placed at the western end of the church to represent the start of the Christian journey but some were later moved to be near the pulpit. Davidson recorded 96 churches with fonts, 22 of which have been altered. Ottery St Mary church has a very ornate font in marble whereas the font in Swimbridge church is totally enclosed in wood. Sidmouth church had their old font broken up when they installed a new one.

Seen as idolatry and popish many memorials were destroyed during the Reformation. Davidson recorded the fact that they were in the church and where but he did not record the laudatory prose. Of eleven churches where Davidson recorded memorials, no memorials are left. Of the 110 churches in East Devon, six were built in Davidson’s lifetime but there are no memorials; two churches have been converted to private dwellings; one was built after Davidson had died but no memorials were transferred from the old church. Seven churches have been rebuilt and 12 churches were restored after Davidson’s visit where memorials have been retained.

Finally Dr Cobley showed photographs of the interior of the church at Clyst St George before it was destroyed by an incendiary bomb in 1940. The ornate and highly decorated interior of that original church was replaced by a very plain but light interior when it was rebuilt in 1952.

Throughout Dr Cobley illustrated her talk with photographs of the interior of the churches she had visited.

At the end of the talk, Dr Jill Cobley answered questions from the members.