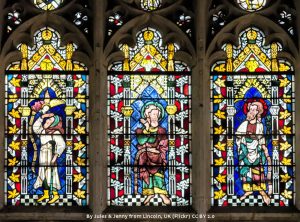 A talk  “Recent research on the medieval glass of Exeter Cathedral” given by John Allan, President of the Devon Archaeological Society, and our forthcoming President for 2019-20.

Over the last five years the provision of protective modern glazing has provided a new opportunity to study the celebrated medieval window glass of Exeter Cathedral. The lecture will show the results of the new survey of the windows, changing some of the interpretation of previous generations.

Three of Master Walter’s surviving figures
from 1304 in the east window.
Photo: Jules & Jenny from Lincoln, UK
CC BY 2.0, via Wikimedia Commons

Report on the event

The stained glass in their windows distinguishes churches from any other building. Though not as great as York or Canterbury, Exeter does have excellent examples and has been studied since the early 19th century. The talk concentrated on the window over the high altar.

In around 1391 there was some new expenditure on the building and new glass was put in in some places.

In 1847 Fulford produced some coloured drawings which still exist and are a valuable record of the window over the high altar at the time. From these drawings it can be seen that some items, for example a Georgian crown, are no longer there.

Between 1884 and 1896 the window was reglazed by Frederick and Maurice Drake – a well known duo, famous for their excellent workmanship.

In the 1980s a major clean enabled a detailed study of the glass, and records and photos were made. From this study it became clear that some of the glass in the window had come from the Chapter House and this led to a complete re-interpretation of the window.

The Norman Cathedral was re-modelled between 1270 and 1350 and the window over the high altar was repositioned. Some of this medieval glass is still evident, though there are patches of Georgian and Victorian glass where repairs have been made.

In 2014/15 repairs to the window gave an opportunity to look closely at the window and modern technology enabled the academics to distinguish between the different ages of the glass. A considerable proportion of the original medieval glass remains and the Victorians made a very good match with their repairs. Much of the window was smashed during the Reformation and the Georgians patched it up! In 1884 there was a major reglazing which was extremely well done by the Victorians.

During the Second World War, the glass in the windows was removed and re-instated in 1948, thus ensuring the windows were not destroyed during bombing raids on the city.