Roman Exeter and the Seaton Down Coin Hoard (Exeter Branch)

Roman Exeter deals with highlighting discoveries such as the bathhouse, military works at the former St Loyes College and at Topsham, and tracing the development of the city from a military stronghold to an administrative centre. 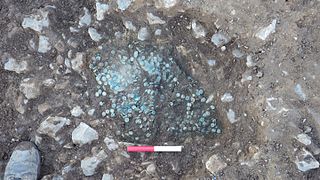 The second subject – the Seaton Down Coin Hoard – traces the find from its discovery in 2013 through the processes of removal, cleaning, identification and ownership. The scale of the Seaton hoard will be compared with other similar UK discoveries.

The speaker (from RAMM) will be announced as soon as possible.

The photo is of the Seaton Down coin hoard being excavated.
(The Portable Antiquities Scheme/ The Trustees of the British Museum)