AGM 2022 followed by “General Lawrence and His Tower” (History Section) 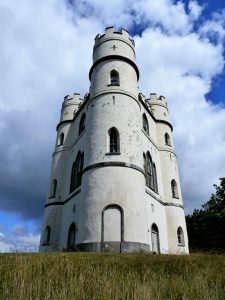 The History Section AGM took place at 2 p.m. in the Rowe Hall of the Mint Methodist Centre and was followed by a talk “General Lawrence and His Tower: The History of Haldon Belvedere” by Dr Sue Knox.  Sue is a retired doctor and Red Coat Guide.  She has lived within a couple of miles of the Belvedere for over 30 years and is now a Trustee of the Stringer Lawrence Memorial Trust which owns the building.

Her talk concentrated on General Lawrence and his activities in India, his association with Robert Palk (of Haldon House) the building of the tower and its subsequent use.

General Stringer Lawrence was born in Hereford in 1698. His father was a brewer and his first name, Stringer, came from his mother’s maiden name. He joined the army at an early age and was stationed at Gibraltar. He saw active service at Culloden but when he was in his early 40’s he left the army, went to London and joined the East India Company.

It was a long journey to India round Africa and usually took six or seven months. Lawrence’s voyage had to contend with the French navy (as England was at war with France), pirates and repairs (stopping at Cape Town for these) and he took nearly a year. Fort St George, at Madras (now Chennai), was owned by the East India Company but there was no harbour and visitors had to climb over the side of the ship and be rowed ashore. Inside the fort were many elegant buildings, including the Anglican Church of St Mary the Virgin. When Lawrence arrived, the fort had been seized by the French and his first job was to retrieve it.

Lawrence’s attempt at regaining the fort failed and he was taken prisoner. It was not until the peace treaty was signed that Lawrence could begin his job of setting up a group of soldiers. He became known as the founder of the Indian Army. Though the officers were mainly European, many were mercenaries or had been sent abroad to avoid scandal at home; their red coats were made of Exeter serge and were far too hot for the Indian climate. The fighting men were usually local but they had no uniform and were badly equipped. As cotton grew around the fort so Lawrence engaged local industry to provide red coats for his men. This made him very popular with the local people. But he had problems getting approval and payment for his requirements as all decisions were made in London – a long sea journey away.

Robert Palk was born in 1717 at Lower Headborough Farm, Ashburton. Educated at Ashburton Grammar School and then Oxford, Palk was ordained and became the curate at the church in the very small village of Egloskerry, near Launceston. After two years he moved to London, became a chaplain in the Royal Navy and he sailed to India, landing at Fort St George.

Liking Fort St George, Palk became vicar of the Anglican Church of St Mary the Virgin after the previous incumbent had been sacked for fighting in the street. Palk met with Lawrence and they became very successful business partners. Palk was very diplomatic and became the army supplier for Lawrence’s organisation. Meeting many merchants in this role, Palk amassed a fortune for himself that went unnoticed for ten years. Forced to give up his lucrative enterprise and become just a vicar, Palk resigned and returned to England where he gave up his holy orders and married Anne Vansittart, the sister of a friend in India.

Lawrence returned home to England too, as he was in poor health.

For the East India Company, the loss of these two men resulted in a reduction in trade as well as the French causing more trouble. EIC profits went down. Therefore they asked Palk and Lawrence to return to India. This time Lawrence was made a General and was given a house as well as a substantial increase in salary. Palk, together with his wife and daughter, were also given a house with staff and all a family could need. Within a year Palk had become the governor of Madras and was amassing a huge fortune. Lawrence, now in his 60’s, fulfilled an administrative role until his retirement in 1765 when he returned to England and settled in London.

The Palk family, now with a son called Lawrence as well as a daughter, also returned to England and bought Haldon House in Devon. They added two extra wings to the original house and it was furnished with exotic carpets and fabulous fittings. General Lawrence was a frequent visitor and loved to walk over the Haldon hills with his cocker spaniel. Lawrence died in London in 1775 but is buried in Dunchideock churchyard. Palk commissioned a memorial to him in Dunchideock church and the East India Company paid for a memorial to him in Westminster Abbey.

As a further memorial to Lawrence, Palk built the Belvedere which was finished in 1788. The Palk family used the building mainly for entertainment while Robert bought up vast quantities of land in Devon and became an MP. On their way from Exeter to Plymouth, King George III, Queen Charlotte and their three eldest daughters spent the night at Haldon House. Wanting to impress the royal party and take them to the Belvedere, Palk had a carriage drive built between the two buildings.

The Belvedere tower is triangular, with a turret at each corner. On entering the tower, there is a statue of Stringer Lawrence dressed as a Roman soldier pointing away from the visitors to his final resting place. On the first floor is a magnificent ball room with an Indian mahogany floor, where many parties were held.

Unfortunately, Robert Palk’s descendants were not good businessmen and the fortunes of the Palks deteriorated. Lawrence, the first Lord Haldon was worried by debt but he brought in William Kitson, solicitor, to help run his affairs. Town lighting was established in Torquay and the Hesketh Crescent was also paid for by Palk money. The second Lord Haldon gambled away much of his money and he became bankrupt. The estate was broken up and the house was sold to the Bannatyne family who restored it to its former glory.

However during the First World War Mr Bannatyne died and his son and son-in-law were both killed. The women who were left tried to sell the house but failed to do so and therefore had to shut down a large part of it. It was finally sold in 1925 and two thirds of it were demolished. The north wing was saved and is now the Lord Haldon Hotel.

In 1925 the Belvedere was bought by an Exeter businessman but then sold again and was eventually bought by Mr and Mrs Dale from Wolverhampton. Together with their three sons, the couple opened up a café and showed people around the tower. Eventually only two sons were alive, the café closed and the building was falling down. When the last son died, the Stringer Lawrence Memorial Trust was established and bought the building. Restored by the Devon Historical Buildings Trust starting in the early 1990s and now leased to them, the Belvedere hosts weddings and other functions as well as hiring out the second floor apartment for weekend breaks.

At the end of the talk, Dr Sue Knox answered questions from the members.