The Rise and Fall of Membland (History Section)

A talk by Ursula Myers who is a retired university lecturer, NT volunteer, researcher and tour guide. She will look at the Membland estate in the time of Edward Baring, 1st Lord Revelstoke and his legacy around Noss Mayo.

Members and guests of the History Section enjoyed an interesting illustrated talk by Ursula Myers on “The Rise and Fall of Membland”.

Situated in a little-known corner of Devon near Newton Ferrers, the Membland estate is first recorded in the fourteenth century. Owned through the centuries by various families, it had its heyday in the second half of the nineteenth century when it was owned by Edward Baring of Barings Bank. Having dabbled in politics prior to 1860, Edward married Louisa Bulteel, also from a banking family, in 1861 and they lived at Membland until 1891. They had ten children, but not all of them lived to adulthood, as was common in Victorian times.

Edward Baring extended the Hall and built a tower at one end. It now had all the modern conveniences of a Victorian pleasure palace where Edward and Louisa could entertain visitors on a grand scale. Their visitors included royalty in the persons of the Prince of Wales (later Edward VII) and Princess Alice but never Queen Victoria herself, which Edward had desired.

Ursula showed photos of the kitchen gardens, which were huge and included cold frames and glass houses; of the magnificent Victorian drawing room; and of the entrance hall which had columns made of Devon green marble and which housed an organ. This was used by the Hallé orchestra when they were employed to entertain the Barings’ guests.

At Christmas the house was full of relations and friends. A large Christmas tree with a fairy on top adorned one of the rooms. After tea on Christmas Eve the tree was lit up and presents given out – first to the servants, then the guests and finally the family.

Guests could go shooting, for example rabbits and woodcocks, or play Real Tennis in the court that Edward had built. In the summer cricket was played.

Unfortunately, in 1890/91 a rogue trader dealing with some of the banking business in South America caused the collapse of Barings Bank and the estate had to be sold. Initially bought by a London syndicate, it passed through various hands until it became an Officers’ Training place during the First World War. In 1927 it was bought by one Stanley Pitts who sold off the fixtures and fittings and in 1928 the Hall was demolished and a new, modern house built. When Stanley Pitts sold off the fixtures and fittings, the buyers had to remove their purchases themselves and inevitably some were broken. Fortunately some William Morris tiles, of the seaweed design, were saved intact and can be seen in the William Morris Gallery.

Many of the other estate buildings have been remodelled into attractive new homes. The household stables have been converted into desirable cottages, one selling in 2016 for over half a million pounds! The old gas works and the gas cottage (where the gas worker lived) as well as the old laundry are all now very desirable homes. 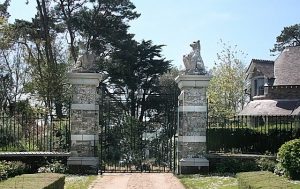 The Bull and Bear gates at Membland. Photo edited from one taken by Martin Bodman.

The ten farms of the estate are still in existence, as are the Bull and Bear gates: magnificent reminders of a past age. The gates are a double pun – on the bull and bear markets of the stock exchange and also on the names Bulteel and Baring.

The Church of St Peter the poor Fisherman, where two of the Barings children who died in infancy are buried, was seriously damaged by a storm so Edward Baring built a new church, St Peter’s, in the middle of the village of Noss Mayo. Local workmen were hired for its construction and Harry Hems of Exeter, a well known wood carver, was employed for the wood carvings, including the beautiful font cover. Louisa died in 1892 and Edward in 1897 and they are both buried in the churchyard along with their eldest son, John, who never married.

Edward Baring became the first Lord Revelstoke and Lady Revelstoke’s carriage drive is still evident. Even somewhat out of date when it was built, the circular drive is nine miles long and runs along some of the Devon coast, giving beautiful views over the sea. The tea houses, where guests could stop and take refreshment, are either now homes or holiday lets.

Ursula concluded her talk by showing photos of the Barings’ yacht “Waterwitch” and their schooner. They also owned a smaller boat named the “Wasp” that was used for collecting guests from Plymouth. The Barings’ boat house at Kiln Quay, Newton Ferrers, is still standing.

Ursula then answered questions on her very informative and interesting presentation.