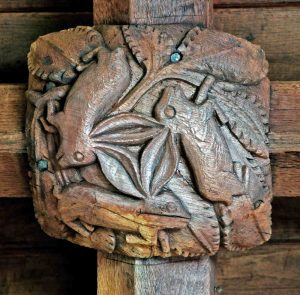 Dr Sue Andrew talks about the enigmatic design of the Three Hares that has links around the world, including its portrayal on seventeen wooden carvings in Devon churches.

The intriguing image of three hares running in a circle, and sharing ears which form a triangle at the centre of the design, is found in the sacred places of three major religions between the sixth and eighteenth centuries. The motif is a puzzle, as though each creature is depicted with two ears, between them there are only three.

From painted ceilings in Buddhist cave temples on the edge of the Gobi desert in China, to painted panels in Jewish synagogues in Poland and Germany, and to carved wooden bosses in the roofs of parish churches in deepest Devon,  the three hares crossed continents and cultures. In the Islamic world between the eleventh and thirteenth centuries the motif was beautifully crafted in ceramic, glass, textile, and metalwork, in precious portable objects which were given, traded, and treasured. These works hold an aesthetic appeal which transcended cultural difference in the medieval period and which is equally powerful today.

The design thus links diverse cultures and peoples over a period of at least 1400 years.