Presentations, talks and video relating to the history of Bampton.

The two page flyer that advertised the event can be seen here.

Report on the visit 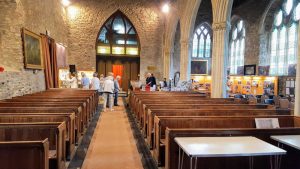 On a beautiful day in July, the DA History members enjoyed an informative and interesting visit to Bampton Heritage Centre.

Welcomed by Katrina, Chair of the Trustees, members were informed that the Heritage Centre, based in St Michael and All Angels Church, was opened in 2013. It is unique to have a heritage centre inside a church, an arrangement that benefits both organisations. Staffed by volunteers, the heritage centre is open Wednesday to Saturday in the summer months meaning that the church is also open. Thus the church is put back into the centre of the community. Bampton has a population of about 2,000 people, of whom 40% are over 60.

Members were then entertained to a virtual town trail film. 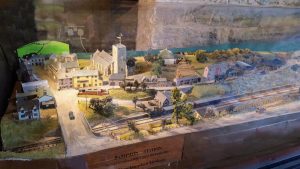 Model of Bampton station and village inside the church

Bampton is situated on a ford in the river that is crossed by north-south and east-west routes. There is evidence of Roman and Saxon remains and it is mentioned in the Doomsday Book. A Norman castle was built here and the motte is still evident. The Exe Valley railway was important in its day but was closed in 1963. There is a car park where the station once stood but Bampton is still on a major cycling route. The packhorse way to Exeter is still evident and there is still a pony auction on the last Thursday in October.

Tea and coffee were then served and members invited to partake of delicious home made cakes. No-one was worried about calories!

After tea, several volunteers gave short talks on various aspects of the town.

The first Norman Castle was built in 1067, probably on the site of an earlier Saxon mound, and was probably made of wood. It was burned down in 1136 when King Stephen besieged the castle and town, which was also burned down. The castle was replaced around 1250 but there are no records or illustrations of it. By 1550 no-one was living in the castle and it fell down in 1607, because of an earthquake according to local legend – though there is no geological evidence for this. In 1955 the bailey was converted into a football field (which it still is) and in 1987 the motte became an ancient monument. 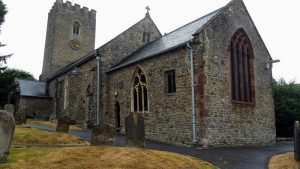 St Michael and All Angels Church

The church has a unique round church yard which could indicate a pre-Christian site. There was probably a Saxon church here before the first substantial building in the 11th century. The roof was raised and the church rebuilt in the 14th century and the aisle built in 1450, paid for by the local Bourchier family. The rood screen was built at the same time and at the back end of the chancel some wall paintings can still be seen. The Swan Inn was built nearby also at the same time to house and refresh the masons building the church! In the 19th century there was a major reconstruction and the organ now hides the crypt where there are bodies and coffins. There are six bells in the tower and the windows are mainly Victorian. 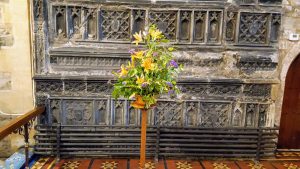 In the churchyard are yew trees about 500 years’ old, with a stone wall around them to stop cattle eating the poisonous leaves. On the side of the church is a sundial dated 1558 – one of the oldest in the country.

Other denominations were active in the town and John Wesley visited Bampton in 1776.

Originally a wool town, Bampton became an important leather-work area, having 4 master cordwainers in the town at one time. The tanneries, of course, made Bampton a very smelly place! But this all came to an abrupt end in 1884 when the railway arrived and cattle could be distributed to other areas of the country.

Quarrying now became the major industry of the town. Surrounded by quarries Bampton sent stone, mainly for building roads and railways, away until 1963 when the railway closed. By 1994 all quarrying had gone.

Bampton now turned to tourism and in 1970 took part for the first time in the Britain in Bloom competition. Having been regional winners 27 times, and national winners 5 times Bampton withdrew from the competition but still keeps its floral attraction. Having retained its shops, pubs and school, Bampton keeps alive and hosts many local events, including those that preserve the local farming community. 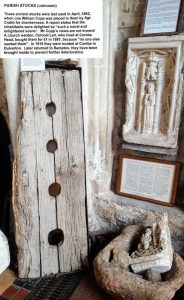 The town stocks, now kept inside the church

Now in its 760th year, Bampton is the oldest running fair in the country. There has never been a year in which it did not run, even though the fairs during World War II were small. Granted a Charter by Henry III in 1258 it was then called St Luke’s Fair but has always been held on the last Thursday in October. Originally a wool and sheep fair, Bampton sheep (Bampton Notts) produced a coarse wool for making jerkins and the breed no longer exists. In the early 19th century bullocks became important and in 1856 ponies were first mentioned. In 1986 ponies were discontinued until 2004 when they were re-introduced. However, they were again withdrawn in 2013.

The fair attracts lots of visitors and is a fun day out for the local community.

Having learned a great deal about the history and current events in Bampton, members of the history section explored the beautiful church before leaving for home.