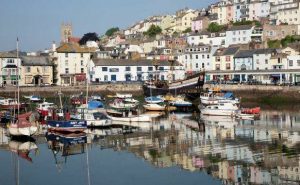 A visit to the Brixham Heritage Centre including a talk on the Mayflower II project.

Places are limited – please contact the organiser if you wish to attend.

After a tour of the museum and its exhibits, members were given a talk by John Scotney on the Mayflower II project.

The Museum is a central part of the community and hosts an active Family History group and Archaeology section as well as having a Writer in Residence, Samantha Little, whose latest book is “Writing Home to Brixham: Lives Across a Century Volume II”.

William of Orange statue, Brixham
Image from Wikimedia Commons – click on it for details

The site of the museum was originally a reservoir supplying water to naval ships at Berry Head harbour via a wooden pipeline. The original building was a police station and there is a police cell now decked out in the museum to show this.

On 5 November 1688 William of Orange landed with 15,000 – 20,000 mainly Dutch troops at Brixham harbour before making his declaration, “The Liberties of England and The Protestant Religion I will maintain”, and moving inland. Many local people still have Dutch surnames, being direct descendants of the soldiers. There is a statue of William in the harbour to commemorate his landing, as well as information in the museum.

Brixham was also famous for its rust-proof paint, produced from local minerals, and this was used on the bridge over the Victoria Falls, as well as on less famous structures.

In 1858 local archaeologist and founder of the DA William Pengelly found flint tools alongside bones of extinct animals in Brixham’s Windmill Cavern which gave evidence of prehistoric man in the area.

John Scotney is now on the executive committee of the Heritage Museum after a long and distinguished career in the media. He wrote over 100 programmes, directed over 300 plays and features and also completed a period as producer of the BBC radio show “The Archers”. He has written a book about the port of Brixham and has helped the BBC with a documentary about William of Orange. He is now involved in the Mayflower II project. 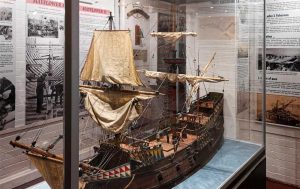 The Mayflower II is a replica of the 17th century ship which took the pilgrims to America in 1620. Mayflower II was built at the Upland Shipyard in Brixham in 1955–56, financed by private donations and the Plimouth Plantation, an American museum. It represented the alliance between the UK and the USA for collaboration during World War II. Sailing from Plymouth, Devon, on 20 April 1957 it arrived in Plymouth, Massachusetts, on 22 June where it stayed on the State Pier as a tourist attraction.

In December 2012 the Mayflower II went into dry dock for repairs and in December 2015 went into the Henry B. DuPont Preservation Shipyard in Mystic, Connecticut, for restoration. It is due to return to Plymouth in 2020, in time for the 400th anniversary celebrations.