A visit to the Devon Heritage Centre at Great Moor House, Exeter. This will include a tour and a look behind the scenes. 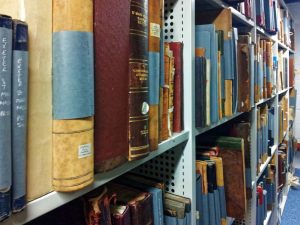 Brian Carpenter, the Community Learning Officer, welcomed members to the Centre and explained that people can register as a researcher (having given some proof of identity for security purposes) and their details will be entered onto the database. The Heritage Centre also has offices in Barnstaple and Taunton. Access on the computers to websites for researching into family history is available and a printout from websites can be purchased. Photography is only allowed with a licence, available for a day, week or a year.

The books and documents housed at the Centre cover most of Devon, though some relate to Somerset and Cornwall. The archives are solely Devon ones.

The development of the internet has changed the way people research as most indexes and catalogues are all online. Also the Centre receives fewer foreign visitors (especially those from the USA and Australia) as they can now carry out their research online at home. Most researchers at the Centre are tracing their family history but people also research public paths and carry out academic research.

The fire system is one of Inergen gas because water (as in a sprinkler system) and archives do not go well together! Flash photography is discouraged but most researchers now use their mobile phone. A full series of DA Transactions is available in the Centre.

Members were then shown three old maps – an 1840 tithe map of Sowton, an 1808 Sowton Manor map that gave the names of the fields and their acreage and an 1842 Parish of Saint Sidwell map. Members then tried to work out the position of current roads and buildings on these!

The Heritage Centre has five strong rooms for keeping archived documents. All the Met Office archives are here. Members were taken into one of the strong rooms where the tithe maps were kept. Some of the maps are 10-12 feet long and are kept in calico bags, made in the conservation department, to preserve them. Some maps are stored flat in drawers.

Members then went on a tour of the back offices. First was the document reception room where newly acquired material arrives before being catalogued and going into the archive. Then came the isolation and drying room which houses a freezer where any nasty bugs living in the documents are killed off.

The conservation area is staffed by a team of trained and experienced conservationists who also train volunteers for other organisations.

After a very interesting and enjoyable afternoon, members thanked Brian for giving his time and such an informative talk.