A visit to Kents Cavern Prehistoric Caves, Torquay. This included a presentation and a cave tour revealing evidence of very early human life in this country. 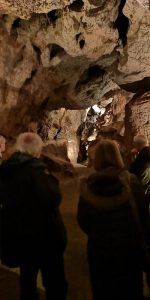 Members of the History Section in Kents Cavern

On entering the caves, members were taken back 2.5 million years to when the Long Arcade, the major route through the complex, was formed. The sound of rushing water cascading through the tunnel was accompanied by silhouettes on the cave walls.

Our guide then explained that the complex was one of the most important Stone Age sites in Europe. The earliest tools ever found in Britain were discovered here as well as the bones and teeth of Ice Age animals.

The land in which the caves are found was once under the sea and is made of Devonian limestone. The caverns were carved out by deluges of water over the ages and as the water table lowered, the caves dried out. They are not deep caves and have a micro climate that keeps the temperature constant at 14 degrees.

There is evidence of all three species of man in or near the complex. Homo Heidelbergensis, the earliest humans, occupied areas near Kents Cavern as their tools have been unearthed in the breccia sediments found in the caves. Tools from Neanderthal man have also been found in the complex. 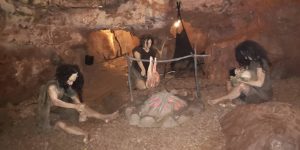 Mock-up of some of the early cave-dwellers

Homo Sapiens appeared about 40,000 years ago and a jaw bone, dated to between 41,000 and 44,000 years old, was found in the cavern by Arthur Ogilvy in 1927. This jawbone is the oldest human fossil from modern man ever found in North West Europe and makes Kents Cavern the earliest known human settlement in Britain.

The caves contain substantial stalactites and stalagmites which grow at only a hair’s width every year, giving an indication of how old the cavern is. They have been known since antiquity, Roman coins being found near the Face Rock which may indicate the 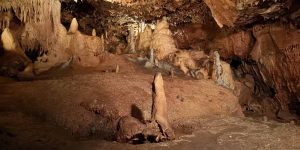 Romans were using the cave to worship their god Mithras. Graffiti record that William Petre was there in 1571 and Robert Hedges was in the caves in 1688 – both left their names and the date. It was certainly a tourist attraction in the seventeenth century when people visited the caves and took home relics.

The complex has been excavated by four men. After our tour of the caves, our guide gave us an interesting talk about these men. The first was Thomas Northmore. In 1824 he went into the caves to look for underground temples used by followers of Mithras, a culture popular with Roman soldiers. Northmore found animal bones, for example bear and hyena, and stone tools.

Father John MacEnery was chaplain to the Cary family who lived at Torre Abbey. He was interested in archaeology and ancient ruins and visited the thirteenth century Ilsham Chapel which was just across the valley from Kents Cavern. He then began to explore the caves and uncovered the bones of extinct prehistoric animals and man-made flint tools. 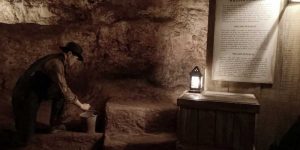 was inspired by the work of MacEnery. A wealthy individual with a love of natural history, Pengelly spent 15 years from 1865 to 1880 excavating the cavern. He discovered hand axes from humans who lived over 450,000 years ago. He was meticulous in recording every single object he found, its location and its level within the cave sediments.

Arthur Ogilvy, the curator at Torquay museum, was the last person to excavate the cave complex. He excavated the caves in 1927 when he found the ancient jaw bone, and again in 1941.

Our guide, who was the Conservation Manager, explained that now the complex is protected and no further excavations are possible. The main work today is in conservation – protecting the existing artefacts and the fabric of the caves.