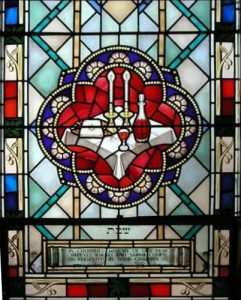 The Bideford Branch summer visit is to Plymouth Synagogue and the old Jewish Cemetery on Plymouth Hoe. This is the oldest Ashkenazi synagogue still in regular use in the English speaking world.

In 1734 there were a handful of Jews in Exeter who maintained ad hoc religious services. A Jewish community was present in Plymouth by the mid-18th century. The members were immigrants, primarily from the German lands and the Netherlands. By 1745 there were sufficient Jews in Plymouth to hold regular services, though they did not have their own synagogue until 1762.

Custodian of the synagogue, Jerry Sibley, is our host and we visit this historic Grade II* listed building in the morning. Optional lunch will be available at ‘The Treasury’ Bar and Restaurant next door to the synagogue. After lunch, we will visit the Old Jewish Burial Ground on the Hoe. This will be followed by an ‘audio trail’ and tea in the vestry of the synagogue.

Cost £20 per person including coach fare. NB: This event will be confirmed once sufficient numbers are reached. The maximum number will be 50. Please contact the organiser for any further information.

Please apply for ticket(s) by completing form on the attached leaflet and sending it with a cheque (£20 per person) payable to The Devonshire Association Bideford Branch no later than Tuesday 31st March 2020. Acknowledgement will be by e-mail or if by post, also include a stamped addressed envelope.

Note the change of date from that previously advertised (was 18 June).