Visit to the Museum of Dartmoor Life (History Section) 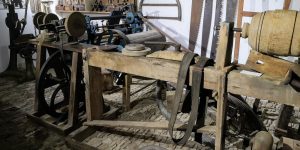 The Museum of Dartmoor Life is in Okehampton and our visit included a tour of the museum, refreshments, and a talk given by Paul Rendell.

Derek Smithers welcomed members and explained that because the event had been so popular, the group would have to be split in two to look round the museum. One group would start at the top floor, and the other on the ground floor. Volunteers from the museum would be on hand to answer any questions. 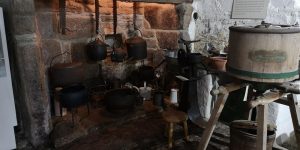 Anne Russell, a volunteer at the museum, gave a brief insight into the history of the museum. The building is on part of an old medieval plot and originally there would have been a garden at the back. The current yard would have been much more extensive in the Medieval period. In 1815 French prisoners of war from Dartmoor prison were used locally to build footpaths and buildings. The Museum of Dartmoor Life was founded by John Young, a member of Rotary, as a charity. The collection started with the contents of Farmer Endacott’s barn and it is now run mainly by volunteers. 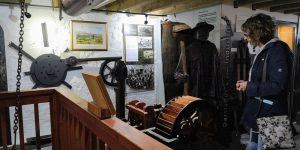 Members then toured the museum, learning about the history of Okehampton and its environment from pre-historic times up to the modern era. There was a replica of a Bronze Age hut, a Victorian Dartmoor kitchen and laundry, and an early fire engine. Industry on Dartmoor – both mining and wool – were covered and a replica mine could be viewed. Farming and associated industries of blacksmithing, wheel righting and cider making took up the ground floor space. 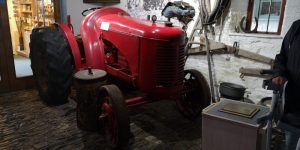 After a break for lunch members re-assembled for a talk by Paul Rendell entitled “Transport on Dartmoor and how it has changed over time”.

Originally, people walked everywhere but there are eight major rivers on Dartmoor and crossing them could be a problem. Stepping stones were sited but Dartmoor receives 100 inches of rain a year (compared with Exeter which receives only 40 inches) and the stepping stones were covered with water when it rained. Most of the rivers flow to the south, though some do flow north, but they have always been difficult to cross. 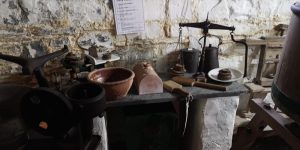 The first bridges to be built were clapper bridges. “Clapper” being Celtic for “large stones”. These certainly helped, and later pack horse bridges, of more solid construction were built. Pack horse bridges had small refuges where people could stand in to let the pack horse go by, the horses carrying tin and wool.

Some bridges still have large stones engraved with a ‘C’, 100 yards each side of the bridge. These indicate the boundary of the County Council responsibility. Old bridges had two arches to them and some had “gates” that could be raised or lowered to stop animals wandering through or to hold back foliage when the river was in flood. Modern bridges are flat.

Before roads were built there were some tracks, but as it was too dangerous to go across the moor, people went around it. Monks did travel across the moor between the abbeys of Buckfast, Buckfastleigh and Tavistock and stone crosses were built to guide them across. 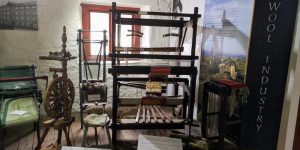 Exhibits related to the wool industry

Lydford Castle was very important in the 12th century as it had a mint, castle and prison. The Lich Way was a track for mourners to carry coffins from Bellever to Lydford, a journey of 14 miles! Eventually burials were allowed to take place in Widecombe. The Quarryman’s path was a granite pathway from the Merrivale Quarry to Peter Tavy. In the 18th Century, Benjamin Donn mapped the tracks across Dartmoor.

In the 1860s and 70s people, especially artists, began to visit Dartmoor, so coach tours started. The railway station at Okehampton had buses taking visitors from the station to their hotels. 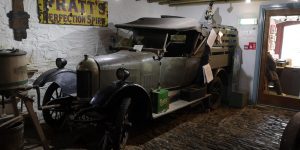 In the early 20th century, tarmacked roads began to appear on Dartmoor and with the advent of cars, more visitors arrived. Buses ran from Exeter to Chagford and there were plans for a railway station at Chagford but they never materialised. However, the railway company did put on coaches to Chagford, which became very popular with artists.

Since the 1870s the military have used Dartmoor. There are two tanks buried in the peat – their weight made them sink and they could not dig them out!

Due to thieves stealing the metal, direction signs have now been converted to wood and plastic across the moor!

There was a tramway from Plymouth to Princetown bringing granite from the quarries with horse drawn carriages. Dartmoor granite was transported to London to build the iconic buildings we know today. By 1956 the granite quarries had closed down and the line was used mainly for visitors and locals, so the station closed as it was cheaper to transport prisoners by road. 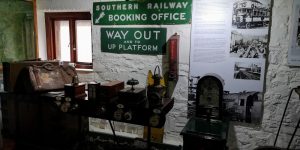 A train line in the Teign valley served the many quarries there but they had fallen into disuse by 1939. The line still ran in daylight hours to serve local passengers but not officially at night. However, people along the route maintained they could hear trains running in the night during the war, but this was denied. Afterwards it was discovered that the quarries had been used for storing ammunition and these ammunition trains did operate at night.