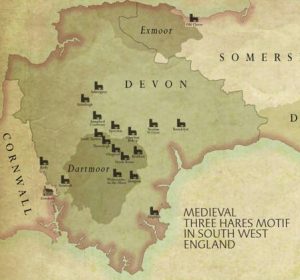 Our Covid-curtailed programme began in March when Dr Sue Andrew gave a superb online talk on the enigmatic motif of three hares, which can be seen carved into oak bosses in 15th century Devon churches. The hares are arranged in a triangle, and although only three ears are depicted, each hare appears to have two of them. Similar motifs with divine connotations appear in Buddhist, Christian, Hindu, Islamic and Jewish contexts spanning many centuries with examples located thousands of miles apart in the ancient world: they have even been discovered in sixth-century Buddhist cave temples on the margins of China’s Gobi desert. But what does this ancient archetype represent? Some suggest that it is a hieroglyph of ‘to be’ or that it conveys ‘peace and tranquillity’.

In 2000, Sue teamed up with former DA President Dr Tom Greeves and professional photographer Chris Chapman to document and photograph all known examples. This ambitious project culminated in a lavishly illustrated book published in 2016 entitled The Three Hares: A Curiosity Worth Regarding (Skerryvore Productions, ISBN 978-0-9931039-2-6). The book is unfortunately out of print, but a chapter can be read on this website here. 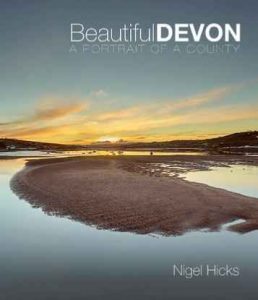 This was followed in April by another online presentation by Nigel Hicks, who is based in Bishopsteignton. Nigel has almost 30 years’ experience as a renowned national and international photographer and travel/tourism author. He is a Fellow of the British Institute of Professional Photography, a member of the USA’s prestigious National Geographic Image Collection, and has established his own publishing company – Aquaterra Publishing, which features his writing and photographs. You can read a review of his book Beautiful Devon here.

His exquisitely illustrated talk was based on his first Aquaterra book Wild Southwest, which started as a photography project and covers Somerset, Dorset, Devon and Cornwall (including the Isles of Scilly). He began by sharing a selection of stunning photographs of the coastlines, including some revelatory underwater shots by marine biologists Paul Taylor and Colin Munro. He then moved inland showing examples of diverse landscapes, habitats and wildlife, and in so doing revealed his deep knowledge of nature. Particularly memorable images included puffins, bluebell woodlands, Chalk grasslands, wild flowers at Berry Head, and desolate, moody moorland scenes. To learn more about Nigel’s work, visit www.nigelhicks.com.

Members of the DA can see videos of Sue Andrew’s and Nigel Hicks’ talks via the available videos page.

At the time of writing (July 2021), we are hoping to go ahead with a tour of Exeter Cathedral’s Lady Chapel and Bishop’s Palace Gardens in early October as Covid restrictions have been eased. Nevertheless, we have cancelled our Annual Lunch at the Exeter Golf and Country Club (September), because members may still be wary of attending crowded indoor gatherings.

Finally, we are pleased to announce that Delphine Jones has agreed to act as temporary Honorary Secretary now that Pat Bonning-Snook has stepped down after many years of excellent service. Pat, however, will remain on the committee.