In early August (2019), several of our members joined local historian Dr David Pugsley at the Half Moon pub in Clayhidon for A re-enactment of the infamous 1853 Clayhidon Murder. Over coffee in the pub garden, which commands panoramic views of this remote and beautiful part of Devon, he summarised the local geography and the social conditions in the area in the mid-19th century.

Participants then drove down to the village hall car park and walked to the house once owned by miller and tax collector William Blackmore, who was brutally murdered. They then continued to the sites of the cottages where agricultural workers George Sparks, the murderer, and James Hitchcock, his accomplice, lived.

Blackmore had set off in the morning of the preceding day to collect taxes from various farms. and later joined Sparks and Hitchcock in the White Horse pub at Bolham Water. Here they spent several hours drinking and playing cards until 01.30 am when they started to walk home together. Dr Pugsley described the murder and showed the memorial stone which marks the scene of the crime, and the roads where they chased each other in the dark. When Blackmore failed to return home, a search party soon discovered his body and Sparks was arrested by the parish constable.

Lunch was taken back at the Half Moon pub where the coroner’s inquest was held. Dr Pugsley then described the trial at Exeter Assizes, including the speech for the defence by John Coleridge of Ottery St Mary, later Lord Chief Justice, which included a quotation from Othello. The perpetrator, George Sparks, was subsequently convicted and executed.

Our traditional Annual Lunch was held on a brilliantly sunny October day at the Exeter Golf & Country Club. For the first time, Exeter Branch members were joined by colleagues from the East Devon Branch, bringing the number of participants up to a very respectable fifty-five.

DA President John Allan was guest of honour and gave a wonderful talk on Breton craftsmen in early Tudor Devon, based on a richly illustrated paper he had published in 2014.¹ John’s meticulous research led him to conclude that there was a forgotten group of several hundred immigrant workers in south-west England during the early 16th century, many of whom were highly skilled woodcarvers and carpenters, and were described in contemporary documents as ‘aliens’ and ‘strangers’. In Cornwall they largely came from Brittany, whereas in Devon their origins were more varied. Predictably, most of them were concentrated in the main towns and cities, although a few were to be found in scattered rural parishes.

By closely comparing several West Country examples of surviving ecclesiastical and domestic pieces² stylistically and technically with similar works in Brittany, their origins can be confidently attributed to Breton craftsmen rather than to local, lesser skilled woodworkers, some of whom might even have adopted some foreign influences.

The best examples of Breton-style wooden screens are to be found today in the mid-Devon churches of Colebrooke, Coldridge and Brushford. Furthermore, there are strong parallels between house frontages in Exeter (41-42 High Street) with those in the Brittany port town of Morlaix, which were rebuilt after the English sacked the town in 1552 (see DA News Autumn 2019 13/2, photos p.9). The woodwork on a former building in South Street (Exeter), known as St John’s Tavern, also generally corresponded to houses in Morlaix, as deduced from detailed recordings and drawings after it was largely demolished in 1834. 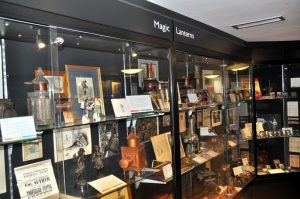 The final event in our 2019 calendar was a free guided tour of the University of Exeter’s Bill Douglas Cinema Museum (formerly the Bill Douglas Centre for the History of Cinema and Popular Culture), which is both an accredited museum and an academic research facility.³ Of the 75,000 artefacts in the collection related to moving images, 1,000 are on display in two galleries: the upper gallery demonstrates the evolution of pre-cinema optical entertainment up until 1910; the lower gallery is dedicated to cinema from 1910 onwards. There is also a library containing books on moving images which is second only to the British Film Institute. The reading room is used by students and visiting academics from the UK and much further afield. 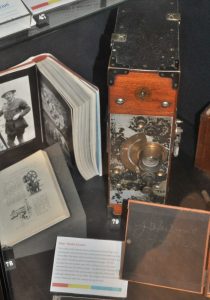 The camera thought to have been used in making the first film of the Battle of the Somme.

Besides making films, Bill Douglas (1934–1991) and his lifelong friend Peter Jewell, assembled one of the greatest collections of material concerning moving images in Europe. After Douglas’ untimely death in 1991, Jewell donated the collection to the University of Exeter, which forms the basis of the museum. Other prominent donors have followed suit. The museum (www.bdcmuseum.org.uk) , which was first opened to the public in 1997, is located in the Old Library on the University’s main Streatham Campus and is open seven days a week, 10 am to 5 pm (free of charge). It is well worth a visit. 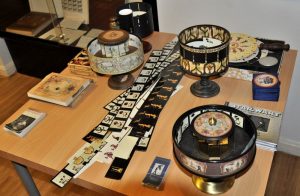 A variety of hands-on devices for creating moving images

Dr Philip Wickham – the museum’s director – spent nearly 90 minutes sharing his extensive knowledge with us. His energy and enthusiasm in delivering the museum tour was most captivating and extremely impressive. Some memorable exhibits included a pair of Marlene Dietrich’s shoes; a model dinosaur used in the film Jurassic Park; and an early movie camera thought to have produced the first film of the Battle of the Somme. 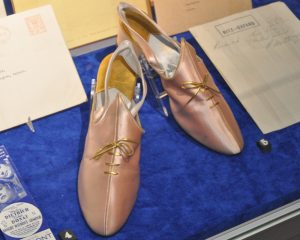 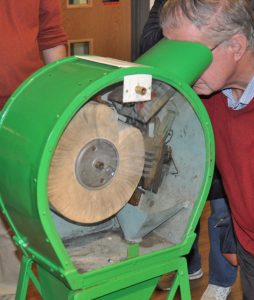 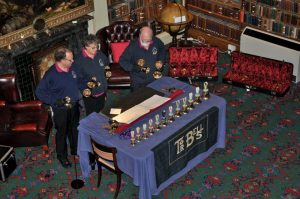 Our 2020 programme opened in January with a New Year Gathering at the Devon & Exeter Institution. Well over twenty members braved the remnants of Storm Brendan and a lack of heating to be entertained by the Ockment Valley and Tor Bells troupe of hand bell ringers, comprising three members of the Willis family from Okehampton. They ably explained and demonstrated their art before inviting participants to have a go for themselves by following special notation panels. After several trial of some well-known tunes, the strains of Beethoven’s Ode to Joy suddenly became discernible, much to the delight of all concerned. An excellent ‘Tea on the Green’ buffet was then taken in the inner library followed by a generous raffle. Despite the inclement conditions, the evening was deemed a successful social and musical occasion.

Photos courtesy of Antony T Buller, except where stated.