Our first spring lecture, entitled Landscape Gardens and F. W. (Frederick William) Meyer, was given on February 7th by Carolyn Keep. Born in 1852 in Grünhof, Meyer worked in his native Germany, Ghent and Lille before arriving in England. Shortly after entering the country, he was employed as a landscape gardener by Messrs Robert Veitch & Son at Exeter with whom he stayed until his untimely death in 1906, just 54 years old. During his time with Veitch he undertook numerous commissions, mainly throughout the Westcountry, including seventeen sites in Devon (e.g. Oldway Mansion, Greenway, Stover Park and Devonport Park) and five in Exeter (Heavitree Pleasure Gardens. Northernhay Gardens, Streatham Hall Palm House, 3&4 Pennsylvania Park and 33 Southernhay East). Whilst creating areas suitable for growing his favoured alpines, which flourished in Devon’s equitable climate, he took considerable care to ensure that his rock gardens remained faithful to their local geological settings. Although largely forgotten today, his ventures were often considered worthy of publication in local and professional journals. Carolyn Keep’s book on his life and work has been published by Devon Gardens Trust*: it contains two useful site maps – one for Devon and one for Exeter – and an extensive table summarising the condition of Meyer’s sites today, some of which have been built over or only partly preserved.

Our second lecture was given by Philip Smith of RAMM on March 7th and dealt with two allied topics: Roman Devon and the Seaton Down Coin Hoard. Coverage of the first topic began with a summary of Roman Exeter, highlighting discoveries such as the bathhouse and military works at St Loyes and tracing the development of the city from a military stronghold to an administrative centre. Previously thought to be the westernmost Roman stronghold in southwest England, there is now increasing evidence of Roman influence much further to the west, including a large Romano-British settlement at Ipplepen and the best preserved Roman cemetery in the region. There is also a Roman fort at Calstock, substantiating the idea that the Roman military was interested in Cornwall’s rich mineral resources. And to the east, there have been significant new discoveries in the Seaton area, including a Roman fort at Couchill and a Roman settlement at Honeyditches.

The Seaton Down Coin Hoard was discovered on the 16th November 2013 by metal detectorist Lawrence Egerton in fields owned by Clinton Devon Estates. The hoard which was buried some 75 cms below the surface and dates back to 348 AD during the rule of co-emperors Constantius II and Constans I, weighed 75kg and consists of 22,888 Roman coins minted all over the Roman World, and three iron ingots. The coins are made of copper alloy and are the lowest denomination used in Roman Britain (the nummus). Arranged in stacks, as though they had been counted, the lozenge shape of the hoard suggests that the coins were contained in a leather bag which has long since rotted away. The Seaton Down Hoard is the third largest contemporary find in Britain. 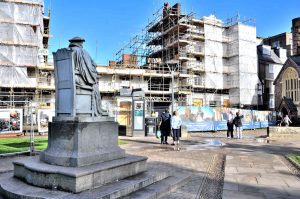 Our third lecture was given by Dr Todd Gray MBE on 11th April and was entitled The Royal Clarence fire and the St Martin’s triangle. He began by reminding us that the fire was the largest in Exeter since the blitz and became news around the world (Photo 1). The media and the council were looking for a local historian to talk about its historical significance and the task was given to Dr Gray who gave over 50 interviews in three weeks following the tragic event.

Having located archaeological reports on the devastated buildings in the Cathedral library, he was able to inform the fire service and the Council that the two top stories of the hotel were 18th century and of fairly flimsy construction, but the lower two were constructed of local red sandstone and were therefore far more substantial. The Council had originally wanted to demolish the entire front of the hotel but Dr Gray was able to persuade them to keep the lower stories, thus saving a major part of the façade. The Mitchelmore building to the left of the hotel, where the fire started, had a very elaborate first floor interior, but this is probably too costly to be replaced.

A year later, Dr Gray was given access to the damaged area and found evidence that the lower part of the hotel’s façade had its origin in the 13th century, and that the large function room partly dates from 1500. Many of the buildings in the area also have medieval origins with later additions. One puzzling feature was the curious carvings on what is now the Santander Bank. Research has revealed that for many years the building was a Boots pharmacy, and it was Boots who were responsible for the carvings carried out by none other than Harry Hems.

Historic England has provided some funds for the archaeological surveys, including all of the buildings in St Martin’s triangle (the entire block from St Martin’s Lane linking the Cathedral Yard to the High Street). 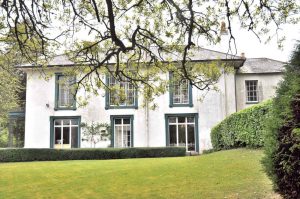 This year’s country house visit was organised by Neil Macaulay (Wednesday 16th May). Ashley Court, near Tiverton, is a small Grade II listed Regency Villa whose grounds were once part of Henry II’s hunting park (Photo 2). The house was originally built by local wool merchant John Upcott around 1657, and was enlarged in 1805. Its largely untouched yet well preserved interiors contain the original floors, fireplaces, plaster work and windows, and the façade contains a decorative ironwork balcony. The present owners, Tara Fraser and Nigel Jones, are planning to convert its decayed grandeur into a superior yoga retreat through sympathetic restoration, faithfully reproducing the original paintwork, wallpaper and other distinctive aspects of the décor. External features include a stable block, lodge cottage, an extensive walled garden, and an attractive woodland walk. A root store and apple loft are capped by a bell tower. Some thirty Exeter Branch members were let loose to explore the entire premises as they wished, and enjoyed a generous cream tea to round off proceedings.

[An article summarising the property, entitled ‘Small but perfectly formed’, appeared in the June (2018) edition of Devon Life, pages 154 to 155.] 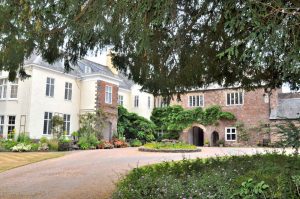 This visit was followed by a highly successful tour organised by Sandra Mutton (Wednesday 4th July) of Tiverton Castle – a part Grade 1 listed building and a part Scheduled Ancient Monument (Photo 3). Members were met by co-owner Mrs Alison Gordon, who spent nearly 3 hours showing us around the gardens and Castle, including parts that are not normally open to the public. During her detailed and humorous commentary, she explained that the Castle, which lies close to the church and is partly bounded by a ravine occupied by the River Exe, was originally built by Richard de Redvers in 1106 at the command of Henry I. Subsequent occupants were the medieval Earls of Devon, Princess Katherine Plantagenet and the Carews (among others). 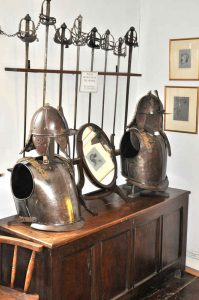 During the English Civil War, the Castle fell to Sir Thomas Fairfax in 1645 when a cannon ball fortuitously hit the drawbridge chain: a superb collection of armaments and armour (Photo 4) dating from that period can be tried on, much to the delight of children! A new wing was added during the Reformation which now serves as an elegant private dwelling. Two cottages and three apartments are available for hire, providing modern comforts in a medieval setting. Again, the proceedings were rounded off by a cream tea and cakes.

Finally, we are delighted to announce that Delphine Jones has joined the Exeter Branch committee. For over 25 years, she was Senior Graphic Designer at the University of Exeter’s Communications and Marketing department, during which time she took the lead on many major design projects, including the University’s corporate image. Her knowledge of the University’s activities and staff will be of particular value. She has also been responsible for the book cover designs of Dr Todd Gray’s books and has produced all of the Devonshire Association’s graphic material (banner, posters, triptych, programmes, leaflets and fliers). Delphine now works alongside her husband, both of whom specialise in publishing design and production. She is also a printmaker and creates images of the Devon landscape which are collected both nationally and internationally.